That's a good time of year; still a lot of snow in the mountains, but around the equinox so the days will be longer (for viewing the scenery) than in the depths of winter. I would recommend taking the Empire Builder home from Seattle if time and money permit. Again, still a lot of snow in the mountains and a good amount of daylight in which to view it. The Southwest Chief is a good train, but the southwest looks much the same regardless of the season. Early spring is a great time to ride the Empire Builder.

I'm puzzled about the family bedroom too, for a different reason. It sounds like you're traveling on your own -- did the agent think you wanted family bedrooms? Or were the other accommodations sold out this far in advance? Of course that is spring vacation time for a lot of people, and COVID has increased the popularity of the sleepers, but even so...

Personally, I do not book the family bedroom when traveling on my own or with one other person, even when the roommettes are sold out and even though it's cheaper than a bedroom (usually). It's a relatively economical sleeper option for families so I would rather try to leave it available for families. Others may feel differently about this, of course.

Sacramento can be foggy. 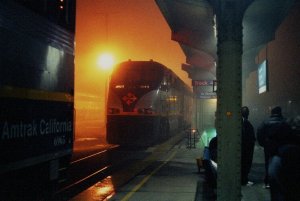 Winter in Seattle can be wet. 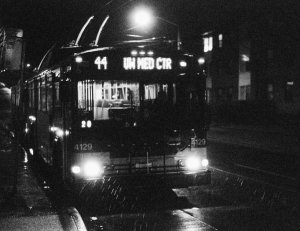 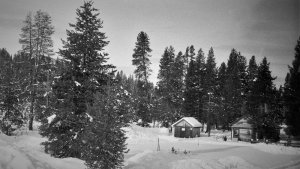 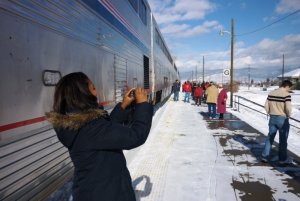 Colorado River from Train 5 in November. More snow to come. 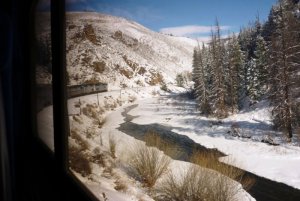 On the Cascade Line from Train 14. 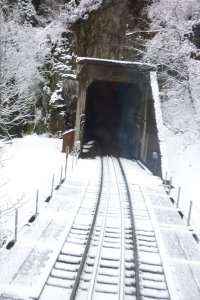 In the Sierras from Train 5. 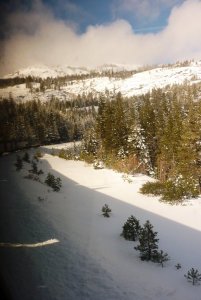 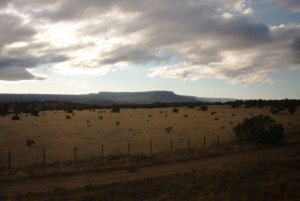 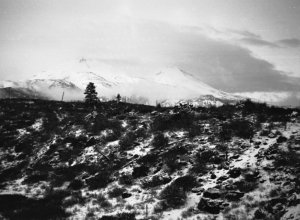 WooHoo! I checked the Amtrak website & found the roomettes on the CL & CZ, now 197.00 cheaper. Modified it immediately & refund deducted. I really do like the roomettes & it frees up the FB.
L

Ok, I checked the website & now I can book a roomette for the return trip, EB & CL For $100 less. I could experience the family bedroom or change to the roomette! Any advice?

Law638 said:
Ok, I checked the website & now I can book a roomette for the return trip, EB & CL For $100 less. I could experience the family bedroom or change to the roomette! Any advice?
Click to expand...

I'd take the Roomette unless you just want to experience the Family Bedroom, which has lot a of Space but is downstairs,which some of us don't care for. YMMV
Last edited: Oct 27, 2021
L

So I modified my reservation to the roomettes & was refunded $200 to my credit card! So far I’ve saved $400 & will keep checking weekly for any more savings! This is fun!

Law638 said:
I’m wondering if I’ll enjoy being on the first level. I really enjoyed the roomette on the Silver Star. What are the chances of being booted upstairs to a roomette?
Click to expand...

Room 15 is the family bedroom. Roomettes on either level are a lower class of room, much smaller than the family room. So I can't see you being booted from a family room to a roomette. If that were to happen to me, I would expect some kind of refund.
Z

Law638 said:
Ok, I checked the website & now I can book a roomette for the return trip, EB & CL For $100 less. I could experience the family bedroom or change to the roomette! Any advice?
Click to expand...

Roomettes on Superliners are not a nice as those on Viewliners like the Silvers. The ceiling is a lot lower, there are no upper windows, and there is no sink in the room. Just setting expectations.
N

Have a feeling you'll like the Roomette better than the Family Bedroom simply because while the later has windows on both sides of the car, those windows are only half as wide as those in a Roomette or Bedroom. 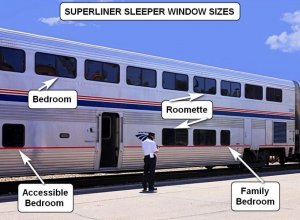 In addition, I think the back on one of the two facing seats (center image, below, on the right) is fixed and bolt upright.

Thanks, niemi24s! It's so helpful to have actual photos showing how these room choices compare!

niemi24s said:
Have a feeling you'll like the Roomette better than the Family Bedroom simply because while the later has windows on both sides of the car, those windows are only half as wide as those in a Roomette or Bedroom.View attachment 25208
In addition, I think one of the backs on the two facing seats is fixed and bolt upright.You
View attachment 25209
Click to expand...

You're just full of useful stuff, thanks!

And I spy a Metrolink train in there.
N

You're welcome! A picture is worth a couple of words.
H

I travel with a service dog. Roomettes are rather small for the two of us. Bedrooms are best, but we also like the family room because there's room on the floor for the pooch. Same with the accessible bedroom.
L

basketmaker said:
Personally I would say absolutely yes to the California Zephyr during winter. And yes to the Southwest Chief back home. Don't forget the Coast Starlight south from Emeryville to Los Angeles. All three give you remarkable and diverse views of this nation's landscapes. The CZ travels some of the most stunning views of the Rocky Mountains all day long out of Denver. The Coast Starlight almost makes you want to step out right into the Pacific Ocean. The SWC takes through the hot and humid southwest. Keep in mind the Empire Builder is a gorgeous ride also across the northern tier of states bordering Canada back to Chicago. And you see some beautiful scenery from Emeryville north to Portland or Seattle. One last option would be the Sunset Limited/Texas Eagle from LA to Chicago. That is Amtrak's longest route to/from Chicago. I have done all them over the years and hate having to detrain when I get home! Or you can put any of them on your bucket list for the future.
Click to expand...

I only booked the FR due to my budget & so happy that I was able to rebook the roomette! i’m going to keep an eye on any price reduction. I’m a little anxious about being on the train for that long. My trip in June to FL was a overnight.
S

Sidney said:
[/QUOTEI'm taking the CZ from Chicago to Davis,the CS to LA and the Sunset/Eagle back in January. All low bucket. The CZ in a roomette would be almost $500 more later in the year.
Click to expand...