Note: This started as a response to a message from Mystic River Dragon in my Five Days . . . Trip Report, but I began to realize that it was perhaps more appropriate for this forum - and then discovered there was surprisingly no entry for Albany.

Some thirty years ago I proposed a weekend Albany trip to my girlfriend of the time, and she plaintively replied, "Albany - what's there?"

This relates to an earlier comment of feeling that I can find enough to amuse me for a weekend in almost any city, as they all have architecture, parks, museums and other things that interest me.

In the 60's - 70's Rockefeller destroyed a large segment of the city by authorizing the Empire State Plaza as his personal memorial. While this urban neighborhood extinction bothers me, I still consider it one of the grandest public spaces that I have ever encountered, including a fair number of grand plazas in Europe.

Architecture critics were not happy with the overall layout and design of the structures, but I find it all quite handsome, and used to love riding my bike through it much as a child would, wandering around freely and choosing my route as I went in a playful manner. There are perhaps a dozen monumental modern sculptures there, as well as many others in the complex.

I encourage you to go when there is a concert of interest to you in the unique Egg Theater. I will generally add my own photos, but this one is not and much more striking than any of mine. 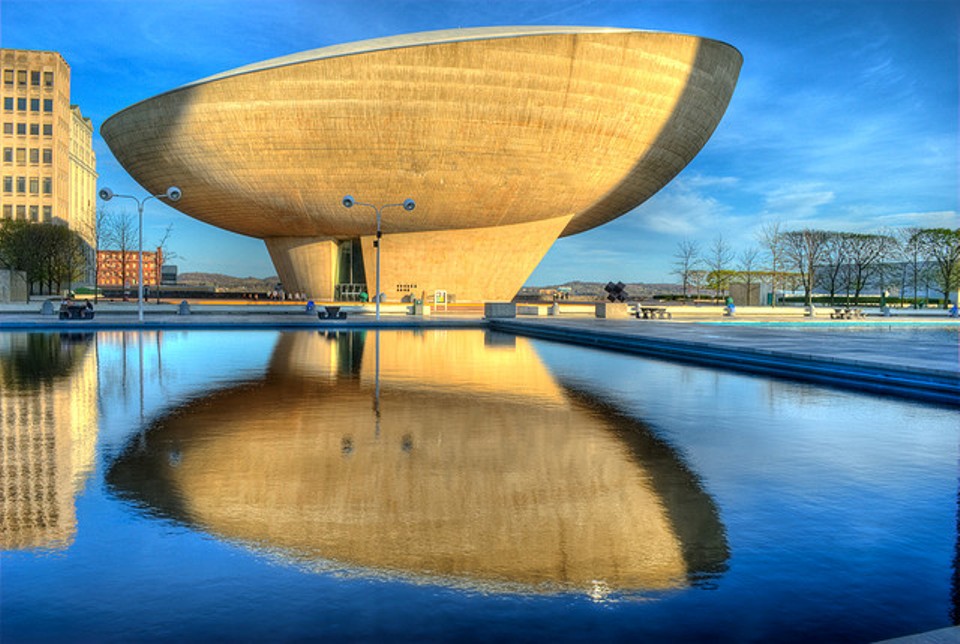 The interior of the Egg is an amphitheater, so everyone there can directly see every other person, helping to create an amazing communal spirit. Some 15 years ago I saw Keb' Mo' there with a girlfriend and another couple and it was an overwhelming experience. At the end of the show all the "roadies" were invited onstage with their own instruments and the general atmosphere was just joyous beyond conception. Again, not my image as I didn't have a camera the one time I was inside the egg. 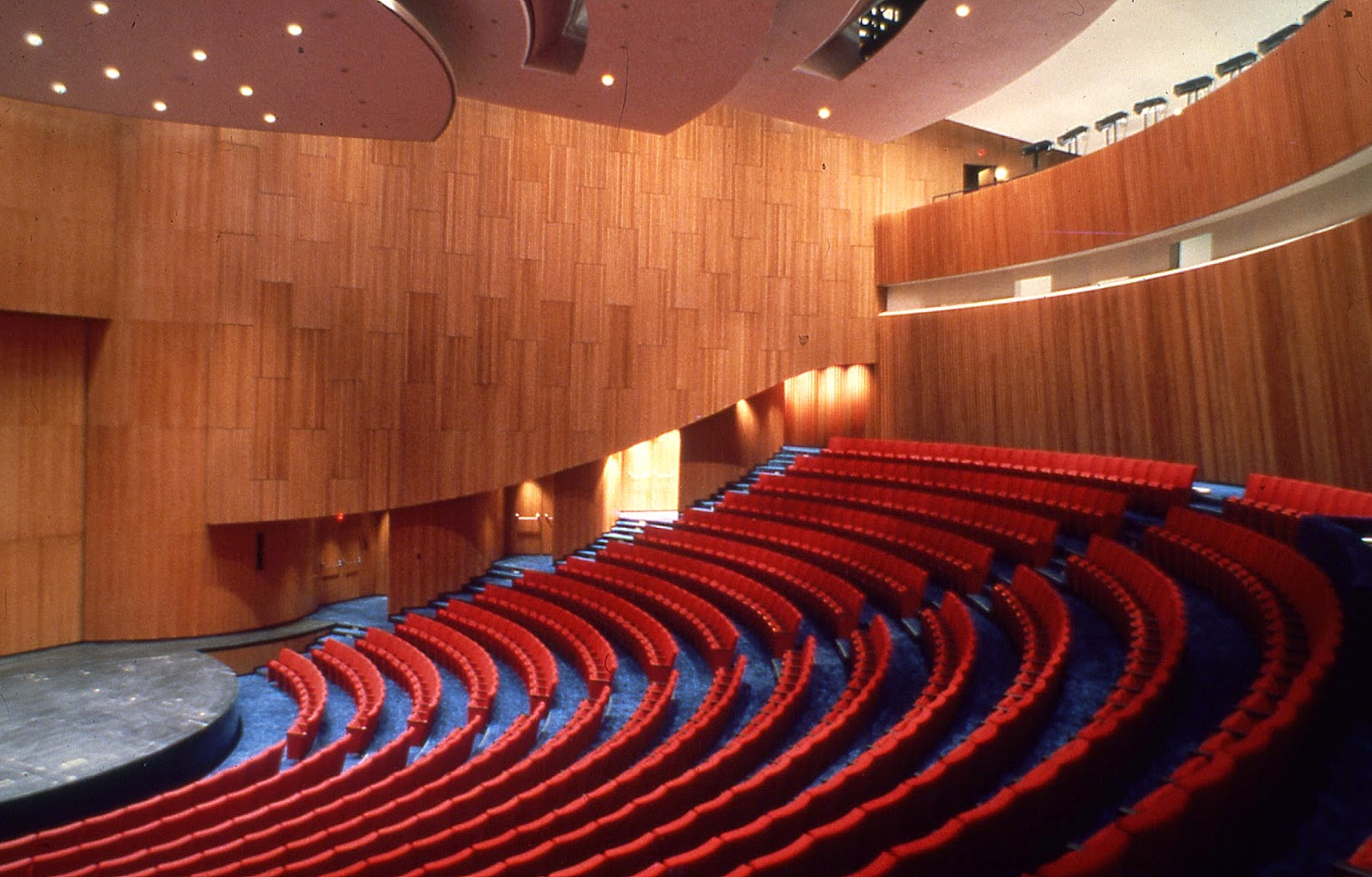 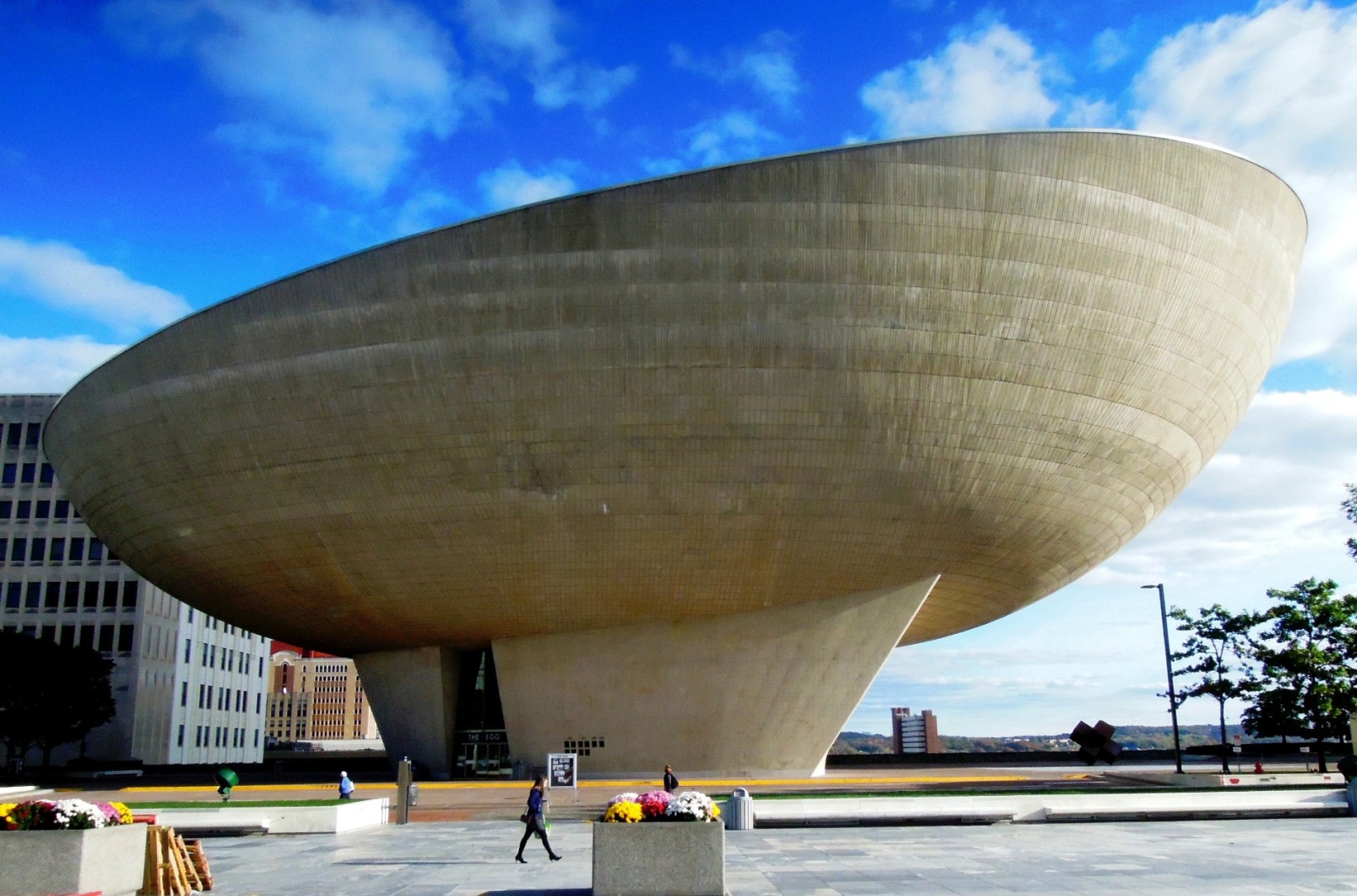 Here are some views of the ~dozen very large sculptures in the Plaza - I have many more images of Albany, but they're all on slides.

State Capitol through a sculpture 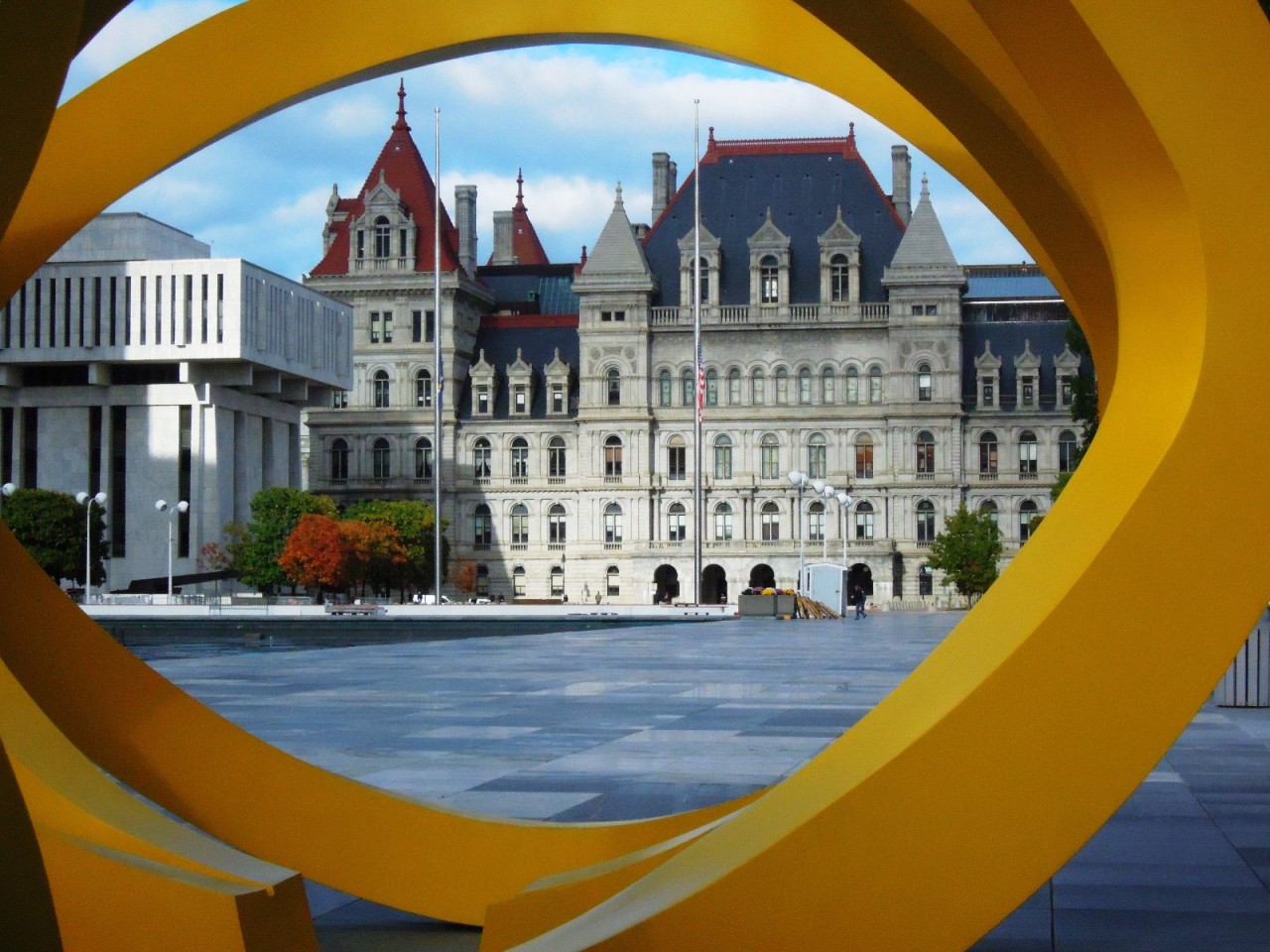 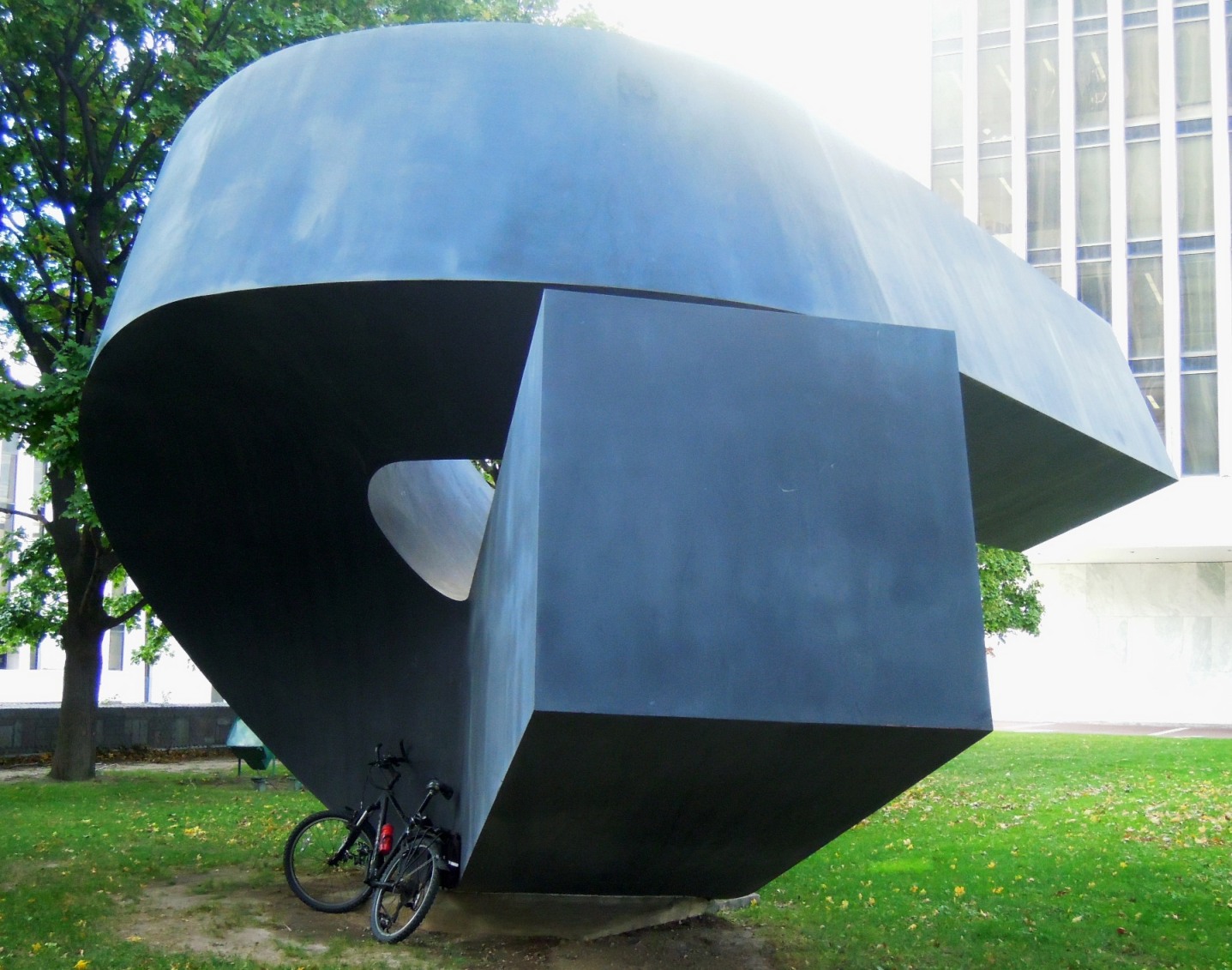 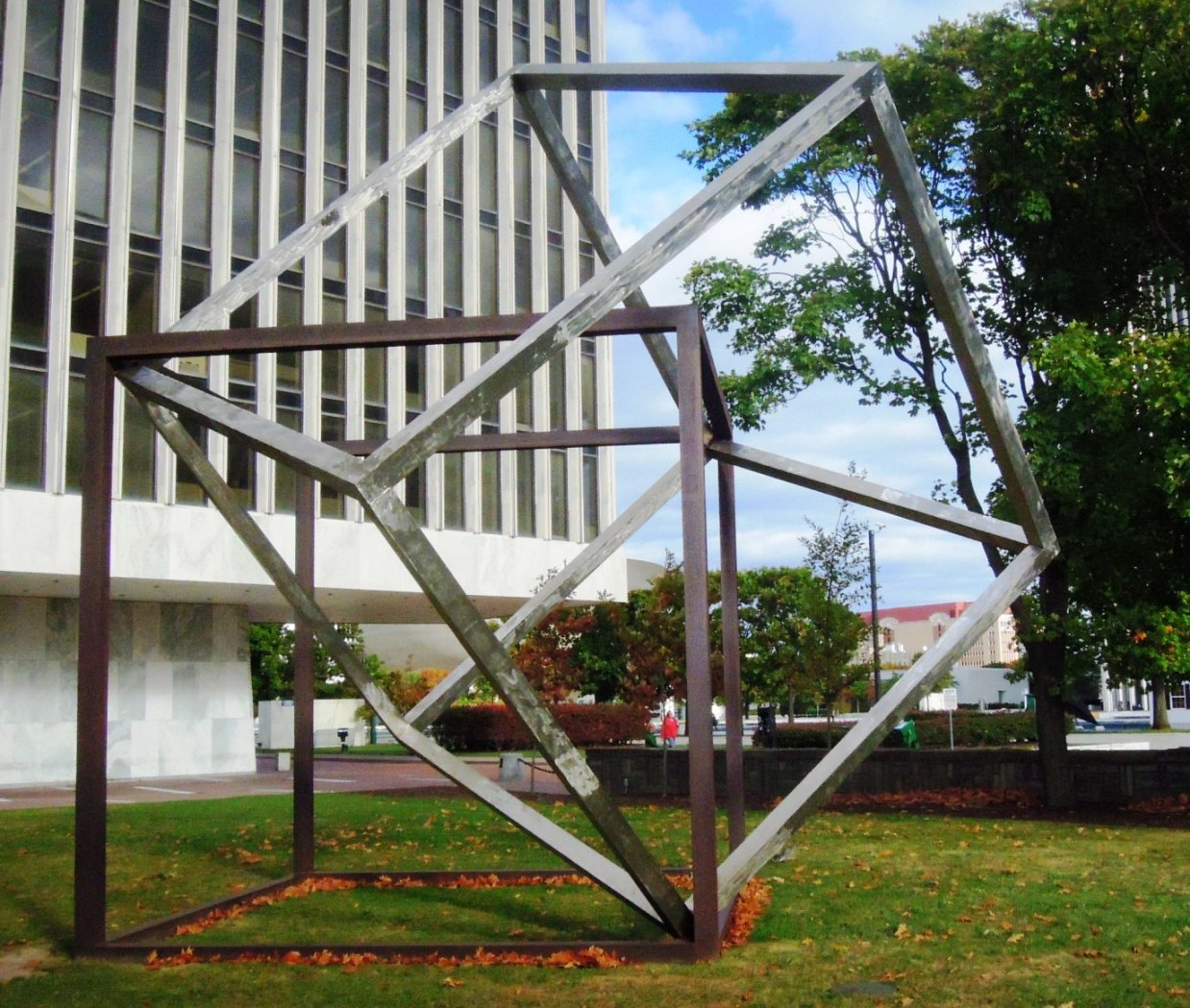 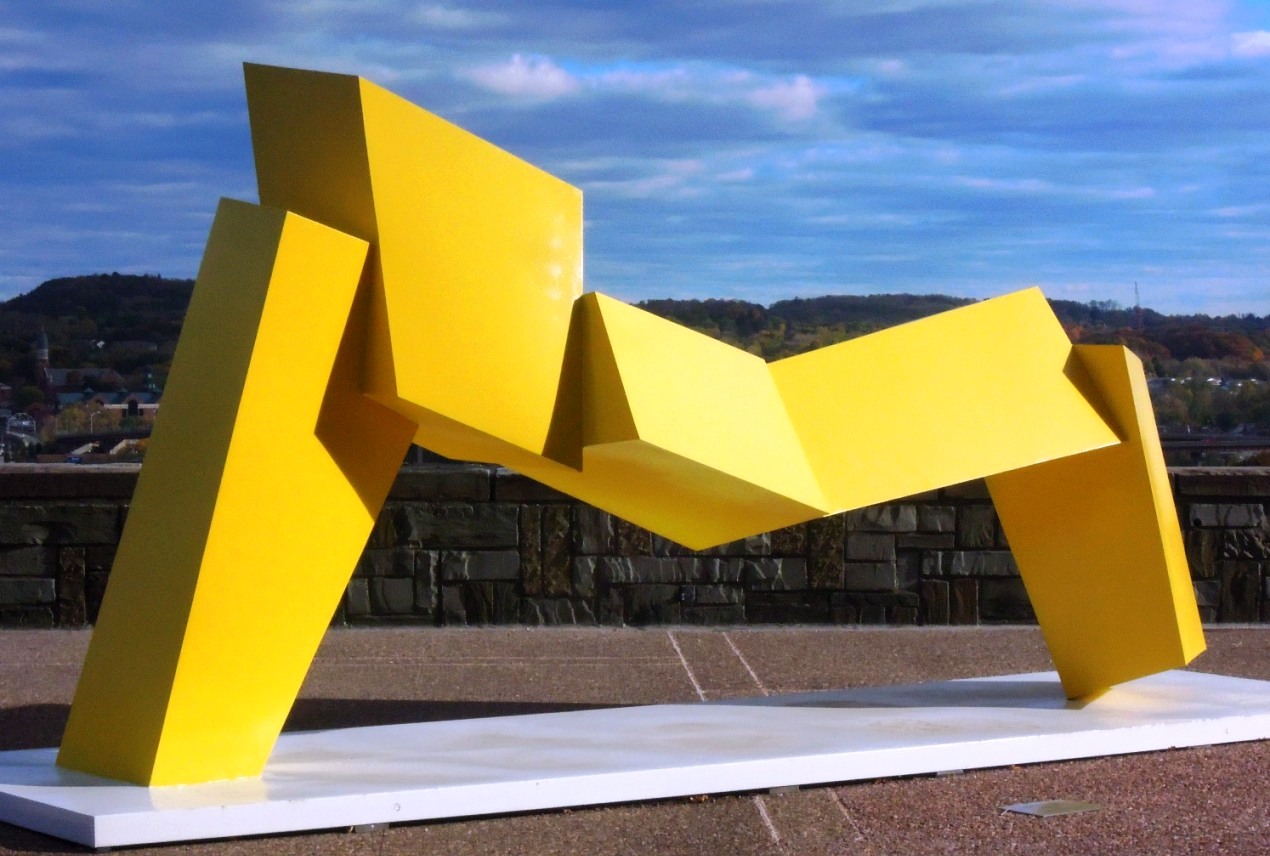 If you like sculpture, there are also a lot of them on the top floor of the Corning Tower on the plaza, and even if you don't there's a great panorama from the observation deck on the 42nd floor - Note that open hours are only 10-4, but free. There is also a whole lot of modern artwork in the 1/4 mile long underground passageway below the plaza, available much longer hours, although likely not 24.

Here's another handy site - https://www.albany.org/ If you click More you'll get a view of the fabled Million Dollar Staircase in the generally ornate and expensive Capitol. There's also a short video showing much of the city's architectural tradition

While in this area I recommend the NY State Museum, which is on the opposite end of ESP from the Capitol, located on the street level of the library above which has the wide steps cascading in front. It closes at 5 PM, but is also free and has some great collections and exhibits. However, it has the most bewildering floorplan of any museum I have ever encountered, so it is impossible to approach it in anything resembling a linear manner. Carry a copy of the map and check your location frequently - and you'll still get confused.

Another art venue is the Albany Institute of History and Art, which is fairly small, but has a decent Hudson River School collection.

I suggest a visit to the Albany Heritage Area Visitor's Center, in quirkily named Quackenbush Square - a rambling collection of old and low brick buildings around a pleasant small brick-paved plaza. On my first visit to Albany circa 1988 they offered an escorted walking tour, but it's now self-guided with directions and hopefully a map.

The classic Palace Theater is nearby, but I wouldn't wander past it or you'll soon find yourself in a neighborhood that you may not enjoy. If you leave Quackenbush via Federal Park to the Palace, either Chapel or North Pearl streets will bring you back into the main downtown area. Alternately, cut diagonally across the intersection to Wallenburg Park, which will then put you on North Pearl street, which represents downtown's commercial area - such as it is. If your budget allows it, I gather the Renaissance Hotel is worth the expense, and is closest to the Capitol and ESP.

One area I recommend is a quadrant of mostly brownstone housing bounded by South Swan St. behind ESP, Washington Ave., Madison Ave., and Delaware Ave. to the west - which has many small shops and restaurants, with large Washington Park just west of this. Dove St. parallels Swan and Delaware, with narrow residential blocks on either side of it. Beyond the architecture itself, I have a vivid memory of some exceptional wrought iron work in the form of stairways and front porches. It would be a major effort to walk all of these streets, so you might just pick a random sample.

Lastly, there is a most pleasant park (Corning City Preserve) and riverfront walkway adjacent to downtown. 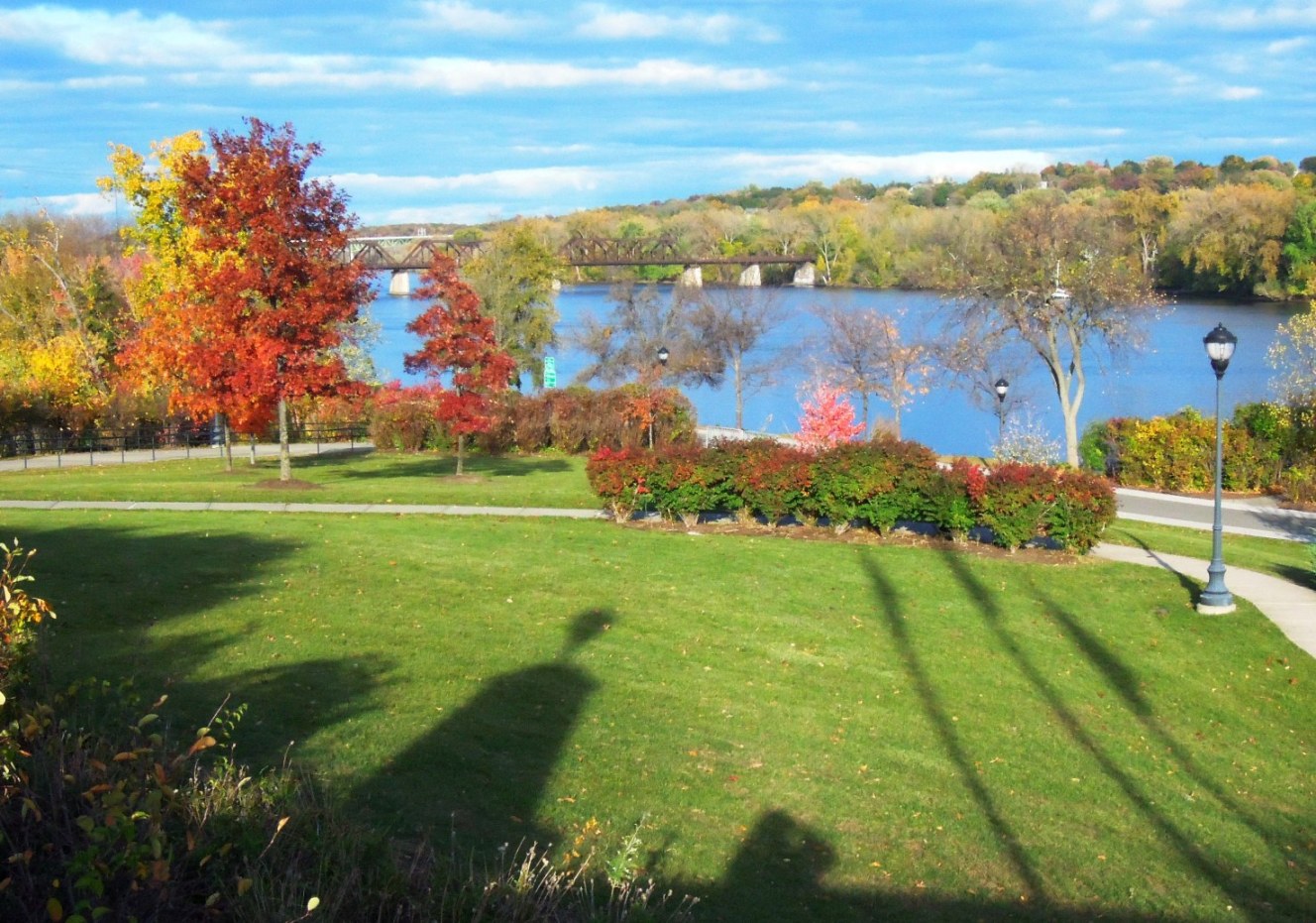 The best access is via an overpass from Maiden Lane just east from Broadway.
Note Amtrak bridge in background.

Alternately, if you follow Broadway south from the bottom of State St., past the D & H Building, there is a street level connection. 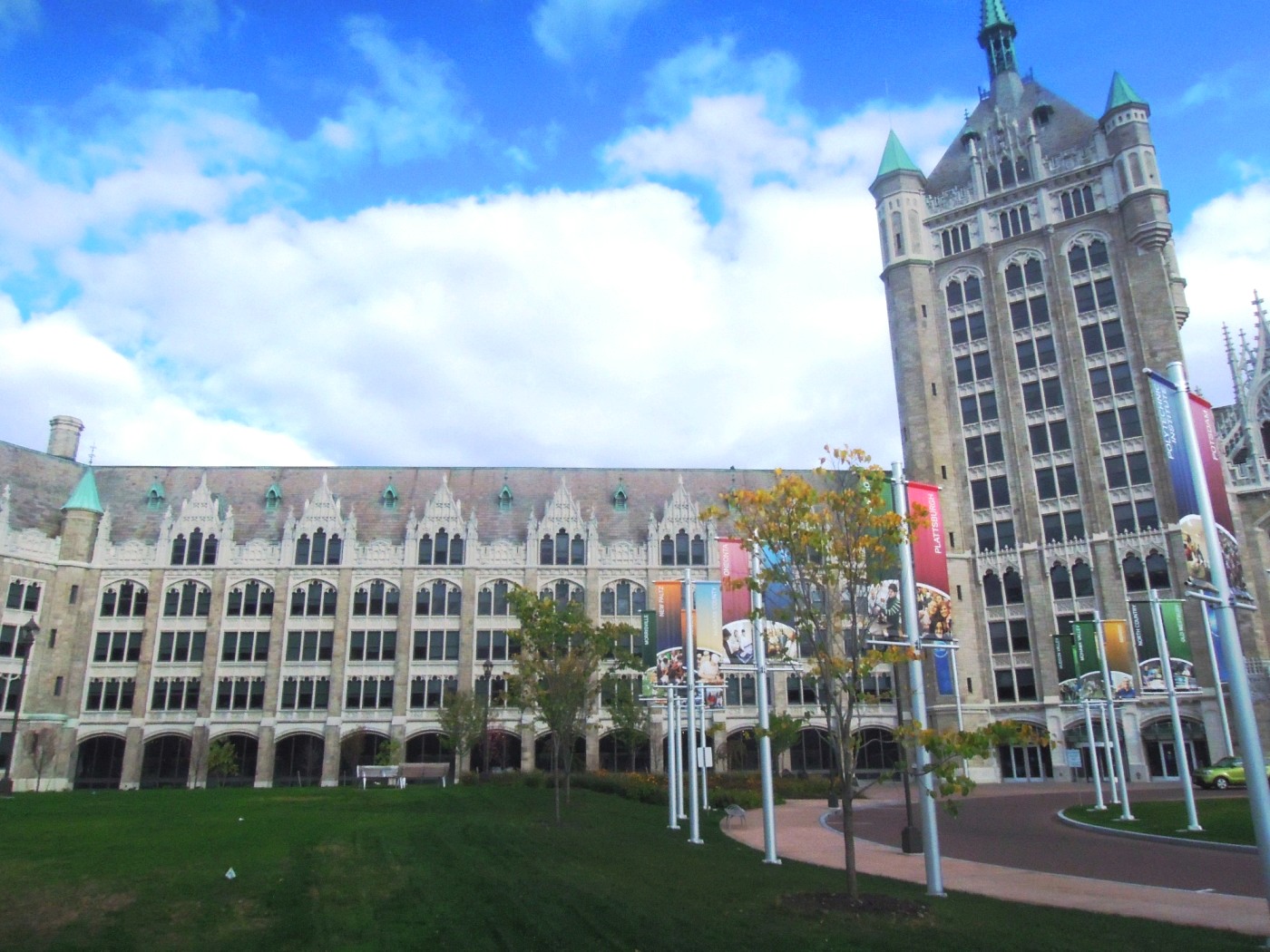 If you turn south, you will reach the USS Slater destroyer escort Museum - check online for visiting info. Turning north you are soon in Corning City Preserve. This ends at a parking lot and more roadways, with less pleasant walking for some ways. If you have a bike, or care to check on local rentals, this path continues for five miles, to the southern end of Watervliet.

See https://ridewithgps.com/routes/30901960?beta=false
You can change the map background in the top right corner, or show other bike paths.
Last edited: Aug 21, 2019

Years ago, the band They Might Be Giants did a tour where, each night, they performed a new song that was about the city and/or the venue where they were playing.

They played at The Egg on that tour, and here's the song that resulted:

The LSL from Boston got into Albany around 6. By the time I got to my hotel and was ready to walk around, it was more like 6:30. I was staying on State Street at the bottom of the hill, sort of near the old D&H building (now the admin HQ of SUNY), which looks like someone cloned the Chateau Frontenac in Quebec and transported it down Lake Champlain to this location. And to think such a fancy structure was the HQ building for a relatively minor regional railroad company. The lady behind the desk at the hotel suggested I walk up the hill, look over the state Capitol, and check out Empire State Plaza. Which is what I did, and was about all I saw in Albany.

The walk up the hill gave me the workout I missed by sitting all day riding the LSL. Here's the NY State Capitol, one of the few in the country without a dome. It's an architectural mishmash of classical and Richardsonian Romanesque style, but it's still a classy building.

Then I turned around the corner, walked on to former governor Nelson Rockefeller's 1960's brainchild, and even though I had heard about the controversy among architectural critics about the design, when I finally say it, the first thing I did was laugh. The critics were right, although maybe not for the right reasons. They had all sorts of fancy art-critic reasons why they didn't like it, but what I saw was that obviously alien lizard-people had taken over Nelson Rockefeller's brain, and were preparing this small out of the way provincial capital for its role as the seat of power for the alien overlords after they conquered Earth. I suspect that only Vice-President Rockefeller's untimely death prevented this from taking place. Of course, there's no real evidence that the above stuff is true, but it makes a good story. And the architecture is certainly consistent with it. I think the architect took some design cues from the Forbidden City in Beijing. This structure (which is allegedly the State Museum and Archives) looks suspiciously like some of those imperial palaces. "Agency Buildings Number 2 and 3" I can't figure out why after all these years they haven't been named after "deserving" politicians.

It's typical 1960s/1970's brutalist stuff, except that, being there was a Rockefeller involved, it's all clad in marble. The scale is immense. If they covered over the reflecting pools, the could land C-130s there, or at least STOL commuter aircraft. This **appears** to be a theater. But it could also be a council chamber for our alien overlords for their deliberations after the Conquest. It's also entirely possible that it's a fully functioning flying saucer capable to warp-speed intergalactic journeys.

Seriously, I had fun walking around this place, not taking it too seriously, even if the designers did so. There were actually quite a few people walking about enjoying themselves, even on a weekday evening. On the deck around the State Museum, there were a group of kids practicing breakdancing. But what they really should do is string up fiesta lights, and get local vendors to come and set up food and drink stands and tables for people to sit and eat, and have mariachi bands wander about playing music, or for alternate musical tastes, country-western bands. In fact, the place is so big, the could have each type at different ends of the plaza and not bother each other. It could be a real hot nightlife party space where people get out of their cars and enclosed air-conditioned bunkers and get to meet each other. And the plaza is so large one could do it while still social distancing.

After that, I went back to my hotel, and then walked down Broadway and found a small pub that served New York State cider and Cajun food.

Having spent many hours in that exact location, you are completely correct. At least about the aliens.

The one thing you missed is the fabulous New York State Museum. It is free and has an amazing history of the state of New York from beavers to the world trade center. It is worth it alone for the gem collection.

Free and usually open. Check it out.
M

Brian Battuello said:
Having spent many hours in that exact location, you are completely correct. At least about the aliens.

The one thing you missed is the fabulous New York State Museum. It is free and has an amazing history of the state of New York from beavers to the world trade center. It is worth it alone for the gem collection.

Free and usually open. Check it out.
Click to expand...

When I walked around the plaza, the museum had closed for the day. The next time I pass through the area, I'm going to have to make it a point to check out the museum.

And again loved your whole review. Especially the Egg. Given what the original Men in Black did with the worlds fair remains, think what they could have done with the Egg.

"They staged an entire worlds fair to cover up an alien landing?"