On Monday, September 26th I rode the first northbound Amtrak Cascades (516) in two years out of Seattle from Mount Vernon, WA (MVW) to Vancouver, BC (VAC) and back. (Three Horizon cars total, two coaches and one café/business class car.) Cost was $50 coach which would have been about the same price for gas to drive up and back. 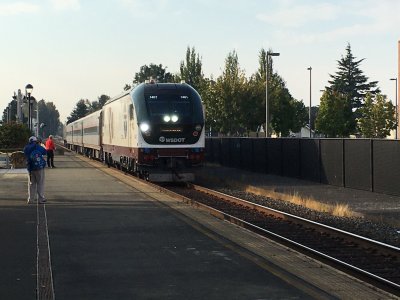 Train crew members were well organized with representatives from both Amtrak and the WSDOT rail folks. (supervisors, PR department) On board employees were on their game to make sure everyone had their ArriveCAN and Canada declaration cards filled out before getting to Vancouver. The well-used PA system worked excellent.

Smooth trip going northbound. A few minutes late out of Mount Vernon. We appeared to be going Talgo speeds according to my speedmeter app. Short delay at Bellingham for a southbound BNSF freight going into the siding. Luckily, BNSF has upgraded the speed on the siding from 10MPH to what looked like 25 so it did not take long for the train to clear. 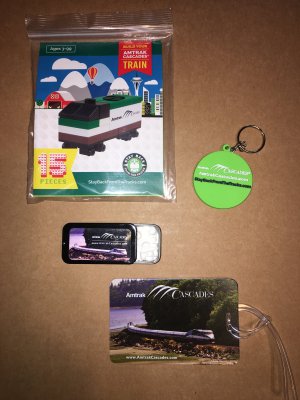 A reporter from the Bellingham Herald spoke to several of us. HA! I’m the hand model in the video.

Clear signals to Fraser River bridge with another short delay for ship traffic. Crew had to hand line switches to get into Vancouver yard. So were arrived at 12:15 instead of the scheduled 11:45. Clearing Canadian Customs was easy-peasy. I believe there were four or five Canadian Customs/Immigration agents clearing passengers at the station.

At the station a kiosk was wheeled out for southbound passengers to fill out US declaration paperwork. Once again about four or five US Customs agents from YVR clearing us before getting on the train. Train started loading about 4:45.

Trying to leave Vancouver was well, interesting. Turns out the fax machine used to get the train orders was not working. Then we had to wait for a NB CN train get into the yard. Finally left half an hour late (6:15) only to run on yellow blocks only going about five miles to wait for another NB train for 30 minutes. Made it to the Fraser River bridge at 7:17 with another delay of 35 minutes to watch barges of rock pass in the dark.

It was announced the cafe car was open and serving food before leaving VAC and would start selling liquor as soon as we were moving. I had the locally world famous Ivar’s clam chowder. 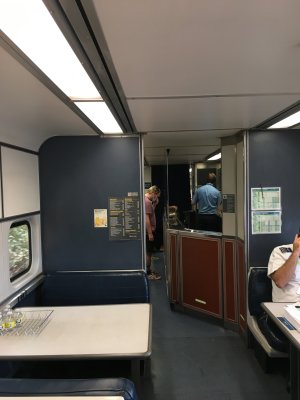 Crew made announcements for every delay on the PA.

Made a stop across the border at Blaine, WA. to have US Customs come on board to look again at our passports and collect our declaration forms. One agent had what looked to be a radiation detector.

Track speed to Bellingham and thence to Mount Vernon where I detrained about 1 1/2 hours later than scheduled. 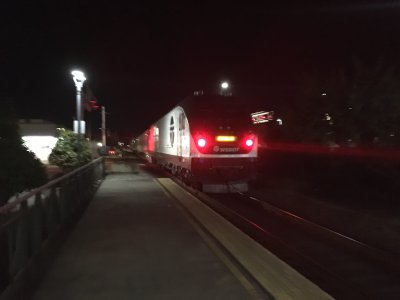 Sounds like the routine was the same as it always had been for the train prior to suspension, such as US Immigration starting an hour before departure, hand throws arriving Vancouver, no liquor until wheels roll at Vancouver, US Customs stop at Blaine.

Horizons are authorized by BNSF to run at Talgo speeds.

Differences seemed to be equipment, the one-time presence of extra officials and swag, broken fax (?!) at Vancouver, and ArriveCan (that requirement to be lifted this Saturday

Never had a southbound that late, although have arrived northbound at Vancouver at late as 1:15 pm.

Did you notice if VIA was staffing the counters at Vancouver? The staffing hours there had dropped to just a few hours around the Canadian's departure and arrivals, 4 days a week.

Thanks for the report.