H/U to anyone that cares (Tyler, I'm looking at you), today's Cap leaving WAS (on time) has Auto Train lounge 33100 tacked onto the rear end (presumably headed to the Grove).
F

Saw it passing Martinsburg. I was on the balcony of the old station/hotel beside the current station. I hope to find out where it's headed. Likely Beech Grove, but I wonder what they plan to do with it there. There are a couple possibilities.

Now if I were a true railfan I would get up to Cleveland at 2:30 tomorrow morning so I could see this car being pulled to Chicago on the CL 29. But alas, I am not that dedicated and will await a report from Tyler on its progress.

I work from 8-12 tomorrow morning, so I can't head down to take pictures.

Pardon my ignorance, but what is special about this lounge?
F

These cars started life as Superliner I diners. They were sent to Sanford, where the local Sanford shop rebuilt them into lounges specifically for the Auto Train. The Company didn't have enough Sightseers to equip the Auto Train, and the less-than-scenic route didn't require the ceiling windows of a Sightseer. Since the lion's share of Auto Train's passengers tend to be Senior Citizens, it was decided that the service area should be upstairs. The cars were intended to operate adjacent to the diners, and the Auto Train serves massive numbers of passengers for dinner, so one end of the upper level was set up to be used as a supplementary dining area. Smoking was permitted in one special, separate area on the lower level. This area was enclosed with a glass door, and had a "smoke-eater", which didn't always work as well as advertised (It's the thought that counts, I guess). Smoking ended a few years ago. The rest of the lower level was non-smoking, and included a small restroom. Since the cars were converted from diners, there were food service elevators (AKA Dumbwaiters). One of these was retained to facilitate moving stock to the upper level. Most Auto Train employees preferred these cars over the Sightseers, although there were always a few who disagreed. Sightseers were pretty; these were tailored for the needs of the Auto Train, and I have always thought they were more practical. These cars are still being used on the Auto Train, and it is hoped that this car will be returned to that service.

These conversions were done before everybody and his/her brother/sister had cell phones, so a very expensive pay phone was installed on the lower level. In addition, a coffee, tea, & decaf station was installed where these beverages could be obtained at any time, complimentary. I don't know the current status of that.

If I recall right these Lounges have some "Loungy" type Booths rather than row after row of straight tables. Is this still the case?

They do, that's what attracted my attention as I was walking past the CL as it was getting ready to leave, I could see the back of the lounge seats through the window. 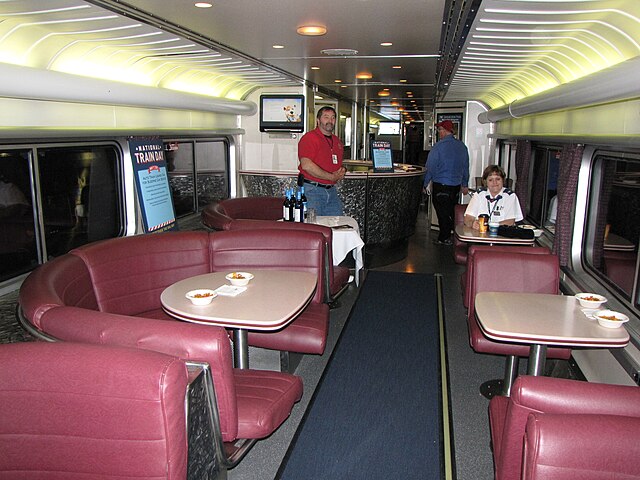 That pic looks like a Dennys or a Vegas Lounge in the '50s! ( ask your grandparents kids!)
R

Reminds me of the purple and red of Amtrak's "psychedelic era".....or the original Auto Train.....

What's in the bowls on the tables? Chips or snacks?
F

In Ryan's picture, you're looking at the lounge end. Beyond the rounded service counter are; 1. The stairs to the lower level (to the left) 2. The food service elevator (to the right) 3. The coffee station (to the left). 4. Tables set up as dining car tables at the far end, for use as overflow dining if necessary.

Yes, the bowls on the tables have complimentary snacks. I usually put out more snacks than that when it was up to me. Current management may have something to do with this.

It looks like the photo was taken right around boarding time, before the passengers had a chance to annihilate the snacks and crush broken chips & pretzels into the carpet (LOL). The fellow on the left is one of the Lorton Mechanical Dept. Foremen, probably doing a final check before departure southbound.

Here a a few from June

No. 1, Top: Standing in the upstairs "dining" area, facing the service area. Left side, nearest is a shelf for snacks, etc. Then the food service elevator. Right side is the coffee station, then stairway to lower level, then condiments, then service counter. I know the attendant. Far end is the lounge area in Ryan's picture.

Third: Same as no. 1, but taken to show two of the ten dining tables.

Fourth: Standing between the lower level entry doors, facing the nonsmoking area of the lower level lounge. Unisex restroom door is in far right corner. The stairway to upper level, telephone booth, food service elevator, and former smoking area are behind the photographer.

Brings back many, many memories.

I really like that bottom picture. That would be a great place to set up board games.
F

TV screens can be seen in several views, for the showing of film in the evening in all areas of the lounge car.
F

Yes, the area in the last photo was always popular with families.

When the Airlines used to have these type of Lounges aboard the planes, ( even SWA had 2 on their 737s!!!)those were very popular booths, or so I hear! LOL
Last edited by a moderator: Sep 5, 2015

All these photos were taken in Lorton. This view faces north.

Thanks for the memories!

Tom, These shots were from our return trip to Fl. On the way up they had just decided to return the sleeper lounge to the consist and the car they used on the way up was the second diner from the couch section. I did not make for a very good lounge, but it did add some extra seating. I'll look and see if I have a pic of that. This was the other train set and I don't know if theyu are still using a diner for a lounge.
You must log in or register to reply here.
Share:
Facebook Twitter Reddit Pinterest Tumblr WhatsApp Email Link