Baltimore to Washington and return

Just a quick update on the state of the NEC, as I went to DC for my 3 times a year doctor's appointment.

The morning southbound train lineup is still pretty sparse. I wanted to get in around 9:30 -10:00, and I had to take the Palmetto. I sprung for business class, and I'm glad I did, as the consist was 3 Amfleet 2 coaches, the cafe car, and the Amfleet 1 business class car. Those coaches looked pretty crowded, but the BC car was nice and quiet, and I had a seat pair to myself. For a while, they were sticking 2 Amfleet 1 coaches in front of the Amfleet 2s, sending all the New York - Washington traffic into them, and detaching them in DC along with the Sprinter. They don't do that any more, in either direction. I'm not sure when they stopped doing that.

Morning traffic into downtown Baltimore is picking up, kit was even a little stop and start on parts of I-83. I haven't seen traffic like this on 83 in the city since before the pandemic. The garage at Penn Station still has a lot of parking spots on the first level, but there's more than there was when I took a day trip last summer. The station was fairly busy, but I never hung around there at 8:30 AM when I was a regular rider, so I'm not sure how it compares pre or post pandemic.

On arrival into Washington, I saw that had done a lot more work on the Track 22 Reconstruction project. Looks like we're going to have some high-level platforms on the lower level tracks when the work is done.

During the ride down, I saw a 2 or 3 MARC HHP-8s parked in the yards at Ivy City, and another one parked (and hooked up to a train) at the station. I didn't realize MARC had so many HHP-8s; I thought they were all heading for the scrap heap. Maybe MARC management has had second thoughts and is keeping the electrics so they can take credit for greenhouse gas reductions. Who knows?

Union Station was pretty busy, not at all like it was a 7 PM a couple of weeks ago when I passed through on my way home from the gathering. There were a whole lot of people in the Club Acela. I was admitted on the basis of my Select Plus car and my assertion that I had arrived on 89. The attendant didn't ask to see my ticket or check my reservation on the computer. On the way home, the attendant slid my AGR card, which I guess would not only verify that the account was legit, but also that I had a ticket for that date.

I needed to ride Metro to get to my doctor's office. Given the "special" schedules due to the 7000 series car problem, I thought it might be a good idea to check WMATA to see when the trains are scheduled to leave. First time I've ever checked a subway schedule! It turns out the Red Line is now running on 12 minute headways. 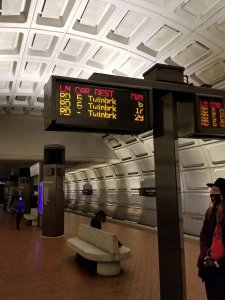 Here's the countdown clock at Union Station showing the headways of the Red Line trains, at least as of about 10:20 AM on Monday November 8. Note that the trains are only going to Twinbrook instead of all the way the Shady Grove due to station reconstruction at Rockville and Shady Grove.

My ride to Farragut North came on time and got me there a just the right time for my appointment. No nasty medical surprises, so it's off again, and I'll return in March. Since I finished up about Lunchtime, it was time for me to get some pastrami at Loeb's deli. It's actually been a while since I had a good pastrami sandwich.... 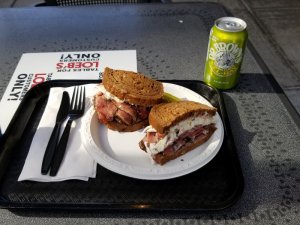 It was such a nice day, I decided to walk back and visit one of the museums on the Mall. I walked through Lafayette Park, where there as a demonstration in front of the White House. It was an Ethiopian group, I'm not sure which side of the conflict there they supported, but the picket signs indicated that they weren't very happy with the major network coverage of the conflict.

My original goal was the Natural History museum, but when I arrived, I found out that they are closed on Mondays and Tuesdays. Oh, well. The Air and Space Museum was open, but I didn't really want to hoof it across the Mall, so I decided to visit the National Gallery of Art, which was also open. It's been a while since my last visit. When I first started working in Washington it was close enough to my office that I could run through and see stuff during my lunch break. Then they moved our office, so I stopped going there. Like all the museums on the mall, it was free, but unlike the Smithsonian museums, they didn't make you take all the stuff out of your pockets for the security scan. Sort of surprises me, given the priceless works of art on display. On the other hand, the place is very well populated with guards, who will not hesitate to (politely) tell you if you're getting too close to a painting. I wandered through the galleries, doing my usual thing of only stopping to look more closely at artworks that catch my eye. They have some new stuff, and a really nice western landscape (Green River Cliffs) by Thomas Moran that I had never seen before.

I ended up in the little cafe in the concourse between the west and east building, where I revived myself with a coffee and an apple turnover.

Then I went out and walked up Louisiana Ave. to Union Station. Before I went in, I checked the trains, and decided on an Acela that left at 2:50 PM. Apparently, the Acelas aren't leaving on the hour, as they used to do. I was actually able to get a Saver fare about a half hour before departure. I'm not sure what's happening with their managed yields, the train was pretty full, and the consist hasn't been shortened. But who's complaining? It was actually cheaper than business class on the Northeast Regional that left 10 minutes later.

I went into the lounge, which was very busy with passengers for 29, which required me to wait in line for a while, as it seems that both of the passengers ahead of me had special inquiries that needed attention. Fortunately, they had 2 attendants, or the line would have been out the door. Once checked in, I saw the lounge was really busy with both Acela and long-distance sleeper passengers. About the time they called my train, I realized that I needed to check what seat the computer assigned me. Good thing I did, as it was in the far car, sharing a seat. I was able to find a new seat by myself in another car while I was walking through the gate.

Soon, we were off, and this Acela stopped at BWI, which they don't usually do (unless they've changed things due to the pandemic). Nonetheless, we made it up to Baltimore in 30 minutes, and I was off to my car. Do we really need a maglev that can (allegedly) do this trip in 20 minutes for a $50 fare when we already have something that can do it in 30 minutes for a $30 fare?

That was about it, the gate at the parking lot exit had trouble with my paid parking ticket and an attendant had to come up and get me out. The drive home was pretty swift, no traffic that early in the afternoon, and that was that, another train ride completed.

Thanks for taking us along on your short journey.

Glad to hear my old Home for so many years is starting to come to life after the rough Pandemic times!

When I last rode Acela in May we stopped @ BWI, but that was Southbound so perhaps the Northbounds don't stop as often, but it's hard to know with Amtraks Ultra-Top Secret Hidden Schedules!

Enjoyed reading about your mini trip as it was our former home town. Were you tempted to ride the Camden line? I used to ride that when it was C&O/B&O and RDC’s shuttled between the two cities. Definitely a different experience than Acela. I guess MARC continued to use them for a while - Budd company made cars to last!
M

Palmland said:
Enjoyed reading about your mini trip as it was our former home town. Were you tempted to ride the Camden line? I used to ride that when it was C&O/B&O and RDC’s shuttled between the two cities. Definitely a different experience than Acela. I guess MARC continued to use them for a while - Budd company made cars to last!
Click to expand...

Thought about doing the Camden Line, but the first Northbound in the PM is closer to 4, and I was ready to head home by 2:30. I have ridden it though. Same MARC equipment as the Penn line, but there are grade crossings and it's a slower train. More of a long distance train ride vibe than the Penn Line.
O

Bob Dylan said:
Glad to hear my old Home for so many years is starting to come to life after the rough Pandemic times!

When I last rode Acela in May we stopped @ BWI, but that was Southbound so perhaps the Northbounds don't stop as often, but it's hard to know with Amtraks Ultra-Top Secret Hidden Schedules!
Click to expand...