Yesterday, hell for it, I went and saw this Amtrak Empire Service 288 was at the station waiting for departure enroute to NYP. 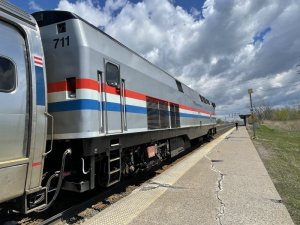 JoshP said:
Yesterday, hell for it, I went and saw this Amtrak Empire Service 288 was at the station waiting for departure enroute to NYP.

Love that livery and the look of the p42s, definitely Ginny miss it
D 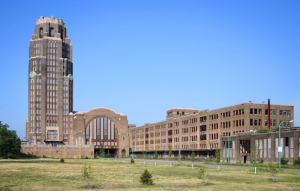 to me, this will always be Buffalo's train station. It still stands and unless I'm mistaken the LSL goes right by it.
P

Which is exactly what it should do, keep going. It is not a good area, and wasting millions of dollars to restore it and move trains to less convenient (for the Buffalo area) locations, would benefit no one other than real estate developers.
D

PVD said:
Which is exactly what it should do, keep going. It is not a good area, and wasting millions of dollars to restore it and move trains to less convenient (for the Buffalo area) locations, would benefit no one other than real estate developers.
Click to expand...

I agree that the trains that are able to stop in downtown Buffalo should continue to do so, but the Lake Shore doesn't and Depew is further away from the core of town than the Central Terminal. I hope that something useful can be done with that magnificent building and as big as it is it obviously needs to mostly be something other than a train terminal. I haven't lived in WNY for a very long time and don't mean to step on the toes of those who do live there currently, but sometimes locals get too set in how they see things.
P

I hope the building is restored and put to use, but other than the Lake, the other trains do stop at BFX. Since Depew is not far from the airport, perhaps a better move for Buffalo would be to have a useful transit link to the area. Lots of people live in the surrounding communities, rather than downtown.
J

Try this video, this BRING me memories. I love LSL esp, during winter. This was way back in 2009 when I used lived in Rochester, NY (as you see old station shown)

PVD said:
I hope the building is restored and put to use, but other than the Lake, the other trains do stop at BFX. Since Depew is not far from the airport, perhaps a better move for Buffalo would be to have a useful transit link to the area. Lots of people live in the surrounding communities, rather than downtown.
Click to expand...

Correct. As someone who often uses Depew to access Amtrak, it is the station that could use the refurb and more trains. Bringing it up to the standard and functionality of Rochester's new station would do far more for the area than throwing money at the old edifice downtown for 3 trains a day - no matter how nostalgic. The new downtown station is actually quite nice and perfectly suitable for its purpose.
N

Depew is a pretty awful location. It's hemmed in by freight yards and difficult to improve without impinging on them.

Sooooooo, there has been a long-term plan to run Buffalo Metro Rail to the airport, and ***NFTA, the transit agency, already owns nearly all the land*** since it's a former railroad route which they acquired back in the 1970s. For some reason, this project keeps getting put on the back burner.

Guess what -- that route runs right past Buffalo Central Terminal.

BCT also has plenty of parking, for those coming from the suburbs.

And is already being restored by a charitable operation with plans to convert the excess space (former offices) into housing. The most expensive part, the roof repair, has actually been done.

The neighborhood is already being revitalized by an influx of (mostly Somali) immigrants.

I think the optimal plan is obvious. But it requires integrated thinking and substantial funding for local urban rail. Build the Metro Rail line to the airport (a billion dollar project, probably); then make BCT the suburban Buffalo station and the LSL station, which even with the Metro Rail station will only use a fraction of the space there; finish the housing conversion; continue the reopening of BCT for events.

neroden said:
Depew is a pretty awful location. It's hemmed in by freight yards and difficult to improve without impinging on them.
Click to expand...

No quarrel with the rest of your suggestion, however I'd disagree with this one statement. Depew is a fairly pleasant and safe location. It has good highway access, being a straight shot across Walden Avenue from I-90. Once you factor in its proximity to the airport (as pointed out here by @PVD and in other discussions on this topic) with car rental and hotel options, it becomes a no-brainer. A survey of the parking lot will show a lot of Ontario license plates in addition to NYS. (This is also the case at the BUF airport.) It makes little sense to a suburban Buffalo or Southern Ontario rail traveler using Amtrak to have to go downtown, where parking - even if safe - would not likely be free and plentiful. There's a reason for suburban stations in any city and the fact that Depew serves the LSL and could also be a key piece of new mainline service (e.g. Ohio - NYC/Boston) could also justify investment at that location.

There is actually enough space around Depew to do a Rochester like configuration, considering that only the two southmost tracks are the main line tracks used by passenger trains. There is plenty of space along the tracks and on the south side of the ROW to do a Rochester configuration, but it will cost a pretty penny since it will require expanding the ROW to the south.

At BCT there is plenty of space to do a Rochester configuration along the ROW but that will be a looong distance away from the terminal building.

But the more logical thing to do would be to use the platform closest to the terminal building to provide two platform tracks. Those can be connected to the main line using a single track connection, so worst case Amtrak will conflict with Amtrak on those single track segments.

The branching from the main line can use the existing loop track so that there is no blocking of the main line by Amtrak trains waiting for another Amtrak train to clear the single track section. The only conflict will be for eastbound Amtrak trains to cross over the normally westbound track. But this area is all bidirectional, so that can be mitigated to a large extent by a little advanced planning.

And yes, this will cost quite a bit too, even if the entire restoration of the terminal building is done as a separate project funded by someone else. Maybe it could be developed as a mixed use hotel, retail and office space of some sort. Unfortunately it isn't really close to anything, so it probably will have to be developed in connection with a general development of the area around it.
D

Buffalo Central Terminal You should be able to get to the details of the plan from here. The public facing web page at Buffalo Central Terminal is not as up to date or easy to navigate as it could be. It's ambitious to be sure, but I'm not sure how realistic it is, they do comparisons to other projects in one of the appendix. Thank you to those who have more on the ground knowledge of Depew. I'll be the first to admit that my fondness for BCT stems from childhood memories of having used it in the late '50s/early '60s. I've only seen it from a distance recently (from the top of Buffalo City Hall). Don't think I've ever been to Depew. I take it folks are happy with the current situation at Rochester?
D 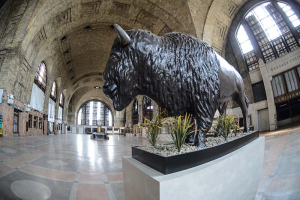