Just a quick trip report on a quick trip from Orcas Island to Portland... I opted for as much public transportation as possible on this trip, and that was a good thing because there was some bad weather on my return. I drove from home to the Orcas Island ferry terminal and parked in the long-term lot. The weather on the ferry trip to Anacortes was rainy and slightly choppy, and we arrived a few minutes late. I then boarded a van to Burlington, where we transferred to a bus to Sea-Tac. The bus stopped only at Marysville on the way, and drove via I-5 through Seattle.

At Sea-Tac, I walked to the light rail station and caught a four-car train to the International District Station. From there, I went to a coffee shop for lunch before going to King Street Station to wait for my Cascades train. There was no pre-assignment of seats, but there was a Business Class waiting area. Business Class boarded first, and as usual that end of the train was away from the station. I got a seat on the two-seat side, which has the scenery of Puget Sound past Tacoma, but the conductor asked me to move to the single-seat side. A half hour later, he assigned the seat I had at first to a single traveler. We arrived in Portland about ten minutes late.

I had a nice visit with my sister and her family in Hillsboro. I was a little disappointed with the Comfort Inn where I stayed, but noted there is an Embassy Suites near their apartment for future visits. On the morning of my departure, I caught a very crowded light-rail train to Union Station. The trains in Portland are limited to two cars by platform length. The Cascades train back to Seattle was not crowded, and I had no problem securing a pair of seats on the scenic side. There was a little bit of snow on the ground in southern Washington, and it was snowing but bare in Seattle when we arrived. But there was quite a bit of snow on the route the bus took (via I-405) to Burlington, and I had to do a good scraping on my truck when I arrived back at Orcas.

Didn't take a camera along, but here's a "proof-of-travel" pic: 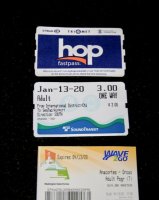 ...wanted to add that there is new furniture in the Metropolitan Lounge in Portland, while the Series VI Talgo trains are looking kind of sad. In both seats I sat in on the way down, there was some sort of minor problem; and the exteriors and bathrooms are dingy.
You must log in or register to reply here.
Share:
Facebook Twitter Reddit Pinterest Tumblr WhatsApp Email Link