This was touched on in another discussion here. Presuming Boston is the last city with two distinct Amtrak stations (not talking about cities with one downtown and others in the suburbs) I thought it might be fun to review cities that have had two or more train stations - in the Amtrak era only. Hopefully our historians will be able to add more details regarding the routes that served each. To start, Galesburg, IL, comes to mind with the Zephyr serving one and the SWC the other - now all combined. Next...

Boston has three Amtrak stations--North, South and Back Bay.

Location
in the depths

As far as I know, Fargo only had one Amtrak station--the former Great Northern station (or its baggage house, which is now the station). My question is how did the North Coast Hiawatha get from the former GN station to the Northern Pacific tracks to go to Jamestown? I was lucky enough to ride the Empire Builder when the west-bound train was detouring on the Surrey Cutoff (bypassing Grand Forks, Devils Lake, and Rugby), and the train backed out of the Fargo station about two miles to the interchange with the NP tracks in Moorhead. Was that the routine procedure for the NCH?

Agreed, but I've always thought of Back Bay as being something less than a main station (while not suburban of course). It is my usual "go to" in Boston if visiting and not connecting to another train.
S

The other examples are just cities with more than one station, with some trains serving a secondary station but all serving the main station.

I know it took Amtrak a little bit of time to consolidate all operations at Chicago - Union Station, but don't know the exact timeline.
R

Can’t leave out New York’s Grand Central Terminal, prior to the Empire Connection, still occasionally used during major disruptions, on the route to Penn Station.
R

If one counts Back Bay, then Philadephia besides 30th Street, also used Suburban Station for the Keystone corridor.... and Philadelphia Airport Station, for Atlantic City trains....

You'd probably consider this a "suburbs" situation (and they're all on the same route), but I'll mention it before someone else does: Los Angeles Union Station, Van Nuys, and Chatsworth are all in the City of Los Angeles.
R

Then there was Montreal’s Windsor Station hosting the Adirondack, while the Montrealer went to Central Station.
R

There were smaller places as well on different routes like Petersburg, Charlottesville, etc....

Off the rails! Don't forget Miami! It has the old station just short of the airport, and the main station at MIA International Airport, a part of the intermodel system at the airport... which is not in use. Was scheduled to go into use in 2017. Amtrak refused to sign the contract with Florida Department of Transportation after millions were spent to built it!

Off the Rails: Amtrak station built near MIA with taxpayer dollars goes unused

(WSVN) - Millions of taxpayer dollars were used to build a new Amtrak station near Miami International Airport. Three and a half years later, it...

SubwayNut said:
Well the Miami Airport made the platform too short for Amtrak to not be able to stop without blocking a grade-crossing
Click to expand...

Reasoning and faulty planning doesn't justify not using the multi million dollar station... there are architectural ways around it... and of course where was the required planning in the original design?

According to the Miami Herald... "The error? The platform that passengers would use to board or descend from the train was built too short, by about 200 feet, an error that would force some trains to jut into busy Northwest 25th Street.
The error happened because of confusion between FDOT and Amtrak. Some Amtrak trains fit well on the platform, but others are longer than engineers expected.

The fix did not include the option of rebuilding or lengthening the platform, but rather allowing long trains to block 25th Street momentarily while passengers board or exit. To make that happen, FDOT had to reconfigure some nearby streets to accommodate traffic detours.

“A crossing has been developed and constructed from NW 28th St. connecting to NW 37th Ave.,” Ruiz-Paz said in an email. “Other roadway elements have also been added to improve connectivity to the infrastructure.”

railiner said:
If one counts Back Bay, then Philadephia besides 30th Street, also used Suburban Station for the Keystone corridor.... and Philadelphia Airport Station, for Atlantic City trains....
Click to expand...

And of course there still is North Philadelphia.

20th Century Rider said:
Off the rails! Don't forget Miami! It has the old station just short of the airport, and the main station at MIA International Airport, a part of the intermodel system at the airport... which is not in use. Was scheduled to go into use in 2017. Amtrak refused to sign the contract with Florida Department of Transportation after millions were spent to built it!
Click to expand...

Amtrak Thruway had two separate bus stations at the Las Vegas airport, but that problem has been solved by discontinuance of the Las Vegas<>Los Angeles route. The remaining service is in the airport's shuttle and chartered bus area. The latter is the one I wanted, when both my Hilton doorman and the taxi driver insisted that I should go to the South Strip Transit Center. Luckily there was one more transit trip that night from the transit center to the airport terminal and the driver of the Thruway bus was looking for me.
S

New Haven has two stations as well. Are Boston and LA the only cities in the country with three stations in the city proper?

railiner said:
If one counts Back Bay, then Philadephia besides 30th Street, also used Suburban Station for the Keystone corridor.... and Philadelphia Airport Station, for Atlantic City trains....
Click to expand...

Has Baltimore been mentioned? It has a main station downtown and BWI at the Baltimore Airport. 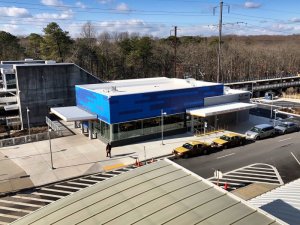 Not yet mentioned is Lynchburg, VA, where the Crescent and Hilltopper/Mountaineer used different stations. (They WERE both Amtrak trains, for a little sliver of time in 1978-79.) Does Salt Lake City count, when the Rio Grande Zephyr was still a separate entity? (If it does, perhaps early-70s Atlanta counts, when Southern and the Georgia Railroad used separate stations.)

Until 1996, there were two Amtrak stations in Galesburg...GBA, on North Broad Street and the Atchison, Topeka, & Santa Fe main line, and (the present) GBB on the BN (ex-Burlington) main. After the BNSF merger and construction of a crossover for the Southwest Chief to use, passenger operations were consolidated on the former Burlington main.

Until July 1974 Amtrak was using both the Houston Union Station (now incorporated into Minute Maid Park) for the Texas Chief/Lone Star and the present Southern Pacific station (III) for the Sunset Limited. Operations were consolidated in the through station; as a Houstonian I could wish that they had consolidated into Union Station instead! (At the time, there was trackage which made that possible, but obviously a backup move into the terminal Union Station was required.)

Edit To Add: My understanding is that Houston Belt & Terminal RR, the owner and operator of Union Station in those days, charged for each switching move. Southern Pacific, on the other hand, was at the time just happy to have dumped its passenger operations on Amtrak. Somewhere in there is probably the core reason why the small-town bus terminal (okay, that's my opinion of it) was kept.
Last edited: Jan 11, 2021
You must log in or register to reply here.
Share:
Facebook Twitter Reddit Pinterest Tumblr WhatsApp Email Link