Theres been a lot of passenger trains that have disappeared in Canada over the past 40+ years including such notables as the Super Continental, Cavalier and Atlantic.....but a pair of non-descript locals that have survived are VIAs remote services between Montreal and Jonquiere/Senneterre (running combined between Montreal and Hervey Jct) that can trace their lineage back to CN #72-73 (Montreal-Chicoutimi) and CN #74-75 (Quebec City Senneterre - Cochrane)

And CNs Timetable from November 1974 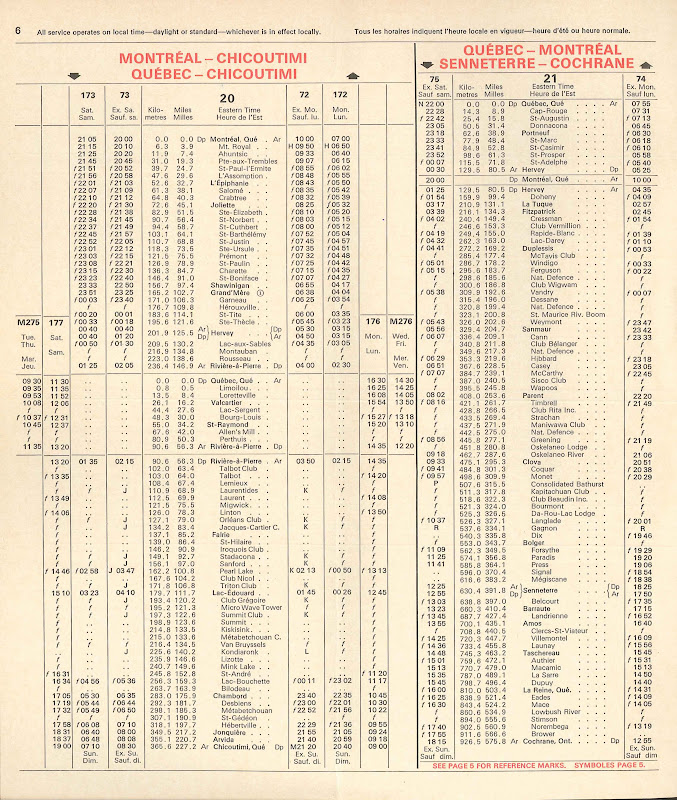 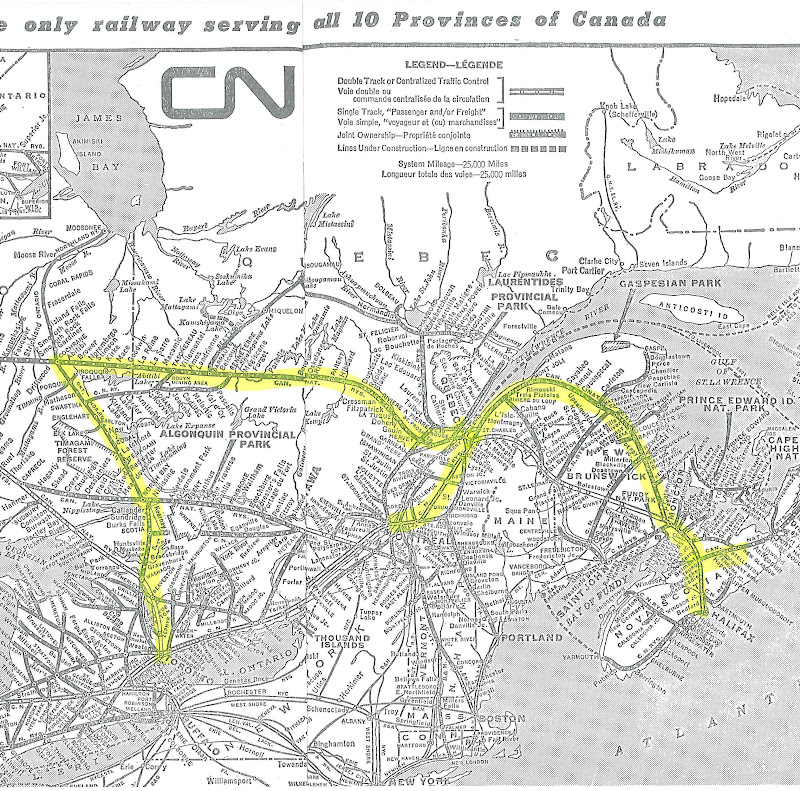 There was something that intrigued me about those CN trains....and I wanted to ride: old heavy-weight section sleepers, (the Pullman kind with upper berths, lower berths & curtains) steam heat and remote stops in the wilds of Quebec. So just after I graduated and started working..... now with a little extra money to spare......I planned out a trip that would let me sample those trains along with a few other routes back in November 1974......and it turned out to be quite an adventure!

I left home in Nova Scotia on CNs Cabot. Arriving in Truro, the DayNiter I was travelling in was added to the westbound Scotian for the overnight run to Montreal. A DayNiter was a step above regular coach.....but certainly couldnt replace the through Sydney-Montreal Sleeper that had recently been discontinued. 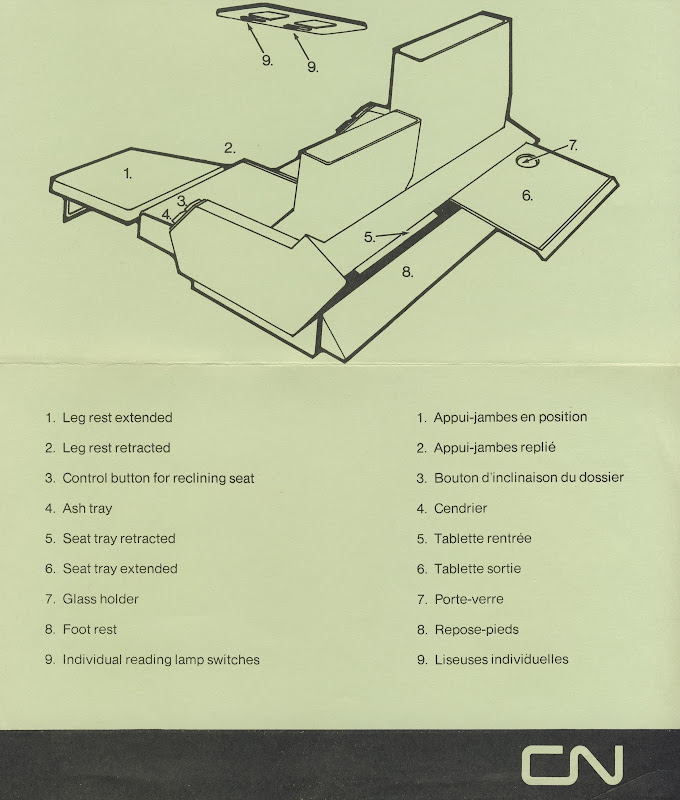 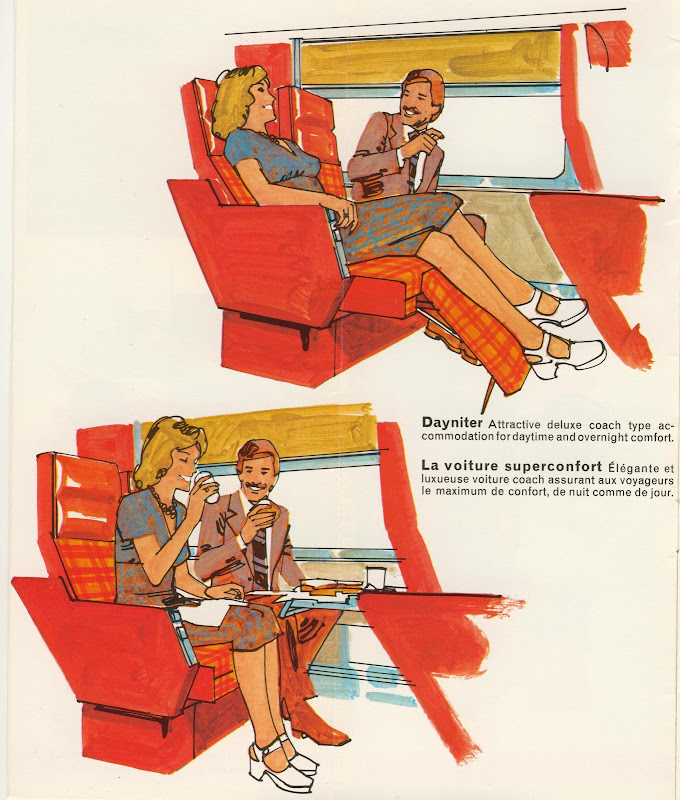 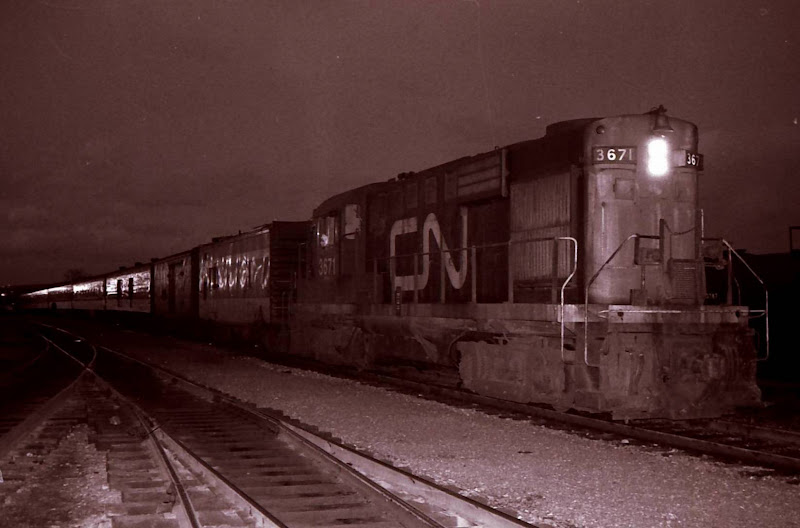 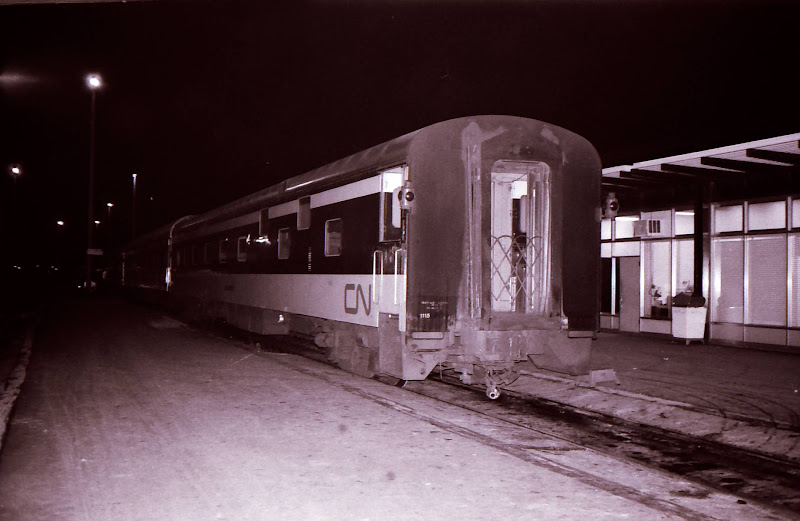 At breakfast the next morning I was hearing rumours about a rail strike in the Montreal area and the possibility the Scotian would be stopped short and passengers bussed on.

Before arriving in Levis at 11am I went to speak with the conductor and explained I was taking the train from Montreal to Cochrane that evening. He said the strike was only affecting the Montreal area and I should get off in Levis and take the Cochrane train from Quebec City instead. The two trains would have met up at Hervey Jct later that night anyway.......I was just going via Montreal for the mileage run!

Levis is across the St. Lawrence River from Quebec City and connected by a short ferry ride leaving right from the CN Station. (the photo below is looking back at the Scotian from the Ferry) Once on the other side, I walked the short distance to Gare du Palais and the ticket agent said there would be no problem using my ticket via Quebec. He changed my sleeper reservation and even offered to store my things for the day. 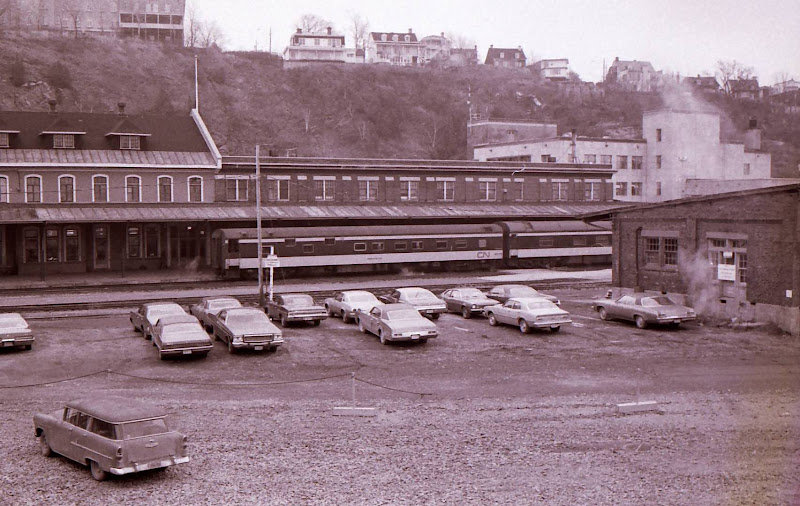 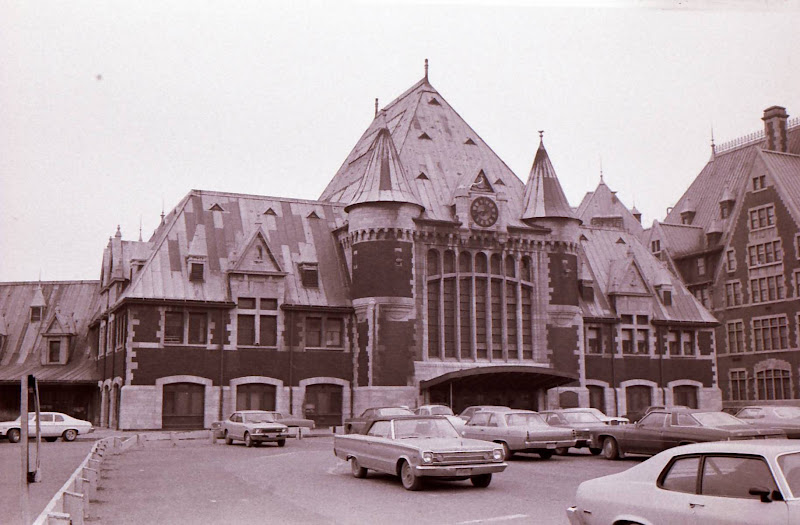 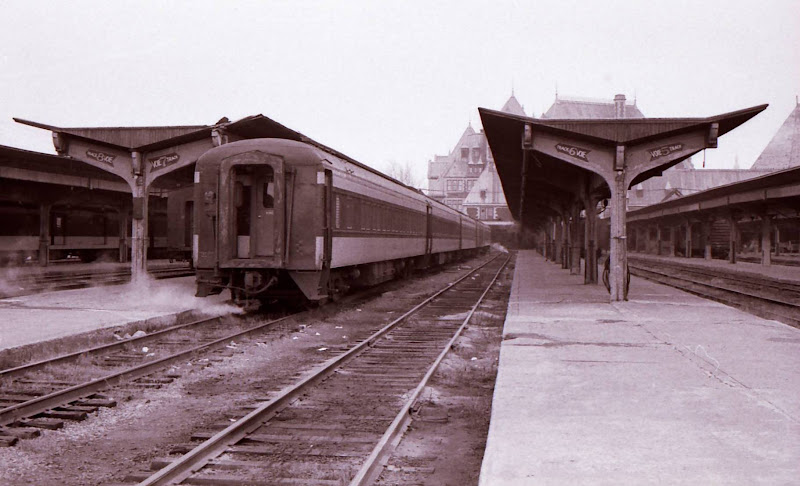 I spent the day just walking around Quebec City and what a great spot for the history buff. Its a walled City and fascinating to walk along the ramparts and the narrow cobblestone streets that enter the old city through gates in the fortifications......and lined with buildings dating from the 1600s & 1700s. This is no Disney re-creation! There were Museums to occupy my un- intended layover and even a tour of the famous Canadian Pacific Railway Chateau Frontenac Hotel. (the photo below is from another trip in the middle of winter with the Chateau high above the frozen St Lawrence) 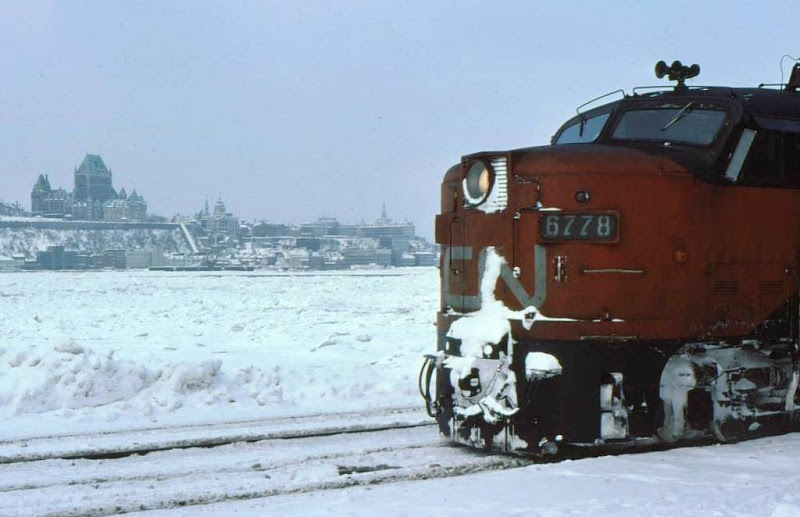 About 8pm I headed back to Gare du Palais to just sit and wait. At 9:30 I heard 'passagers voiture-lit' (sleeping car passengers) and I walked forward. There were about 5 of us......and we get the bad news: The old heavyweight sleeper in the consist wouldnt in-service that night. The porter for this car usually comes up from Montreal on the evening Rapido and with the strike on......no Rapido......no porter!

We were allowed out to the train and including the coach passengers......not that many at all! The conductor took pity on us and turned the seats so everyone would have a four-seater to themselves.......he even went back to the sleeper and grabbed an armload of pillows! So after walking around the city for 8 hours, the car was warm, the lights were dimmed.....it might not be the lower berth I was expecting but that coach was pretty darn comfortable! 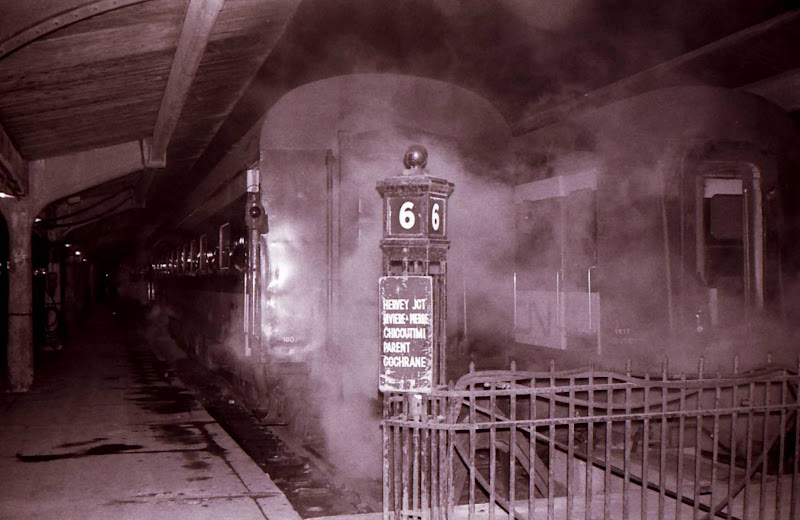 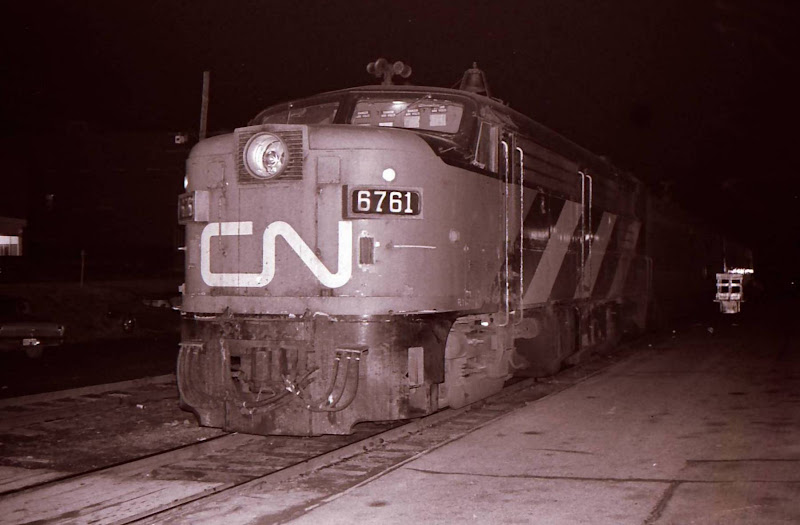 About 2 hours out of Quebec we stopped at Harvey Jct and just sat........ Normally this is where we would have meet #73 up from Montreal (the train I should have been on) and would have spent an hour or so switching and exchanging cars.....with #73 continuing onto Chicoutimi..... and us onto Senneterre.

After that, I slept pretty well. The next morning I found out there was no attendant in the lounge car either (also from Montreal) so no coffee. The conductor said we would be stopping just up the line in Clova for 20 minutes so everyone could walk over to a local store.......and I can remember getting along pretty good with my high school French as I came back with a coffee, pastry and fruit for breakfast.

Now on to the divisional point of Senneterre for some serious switching...... 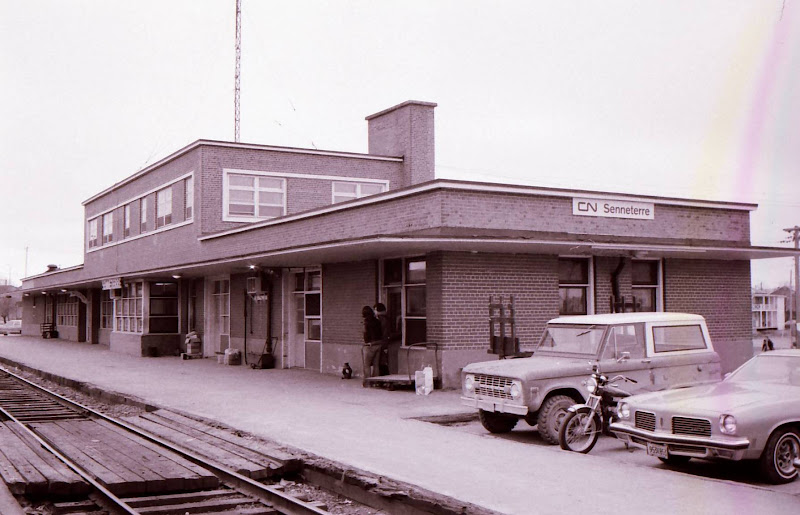 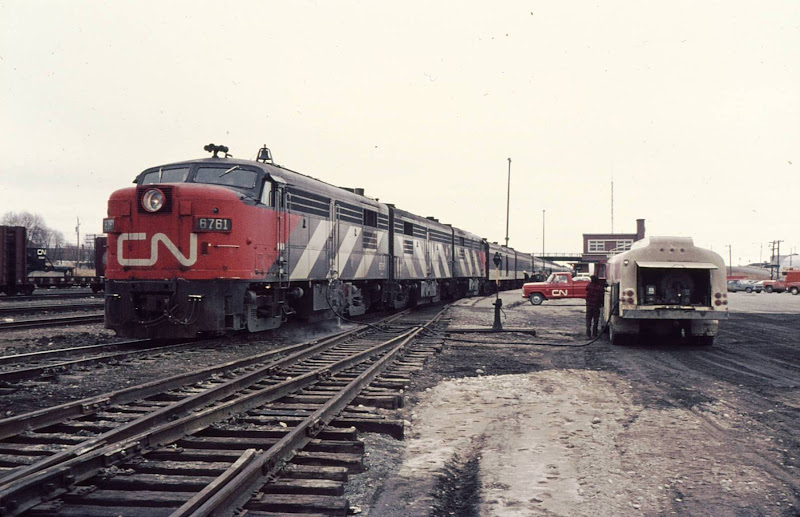 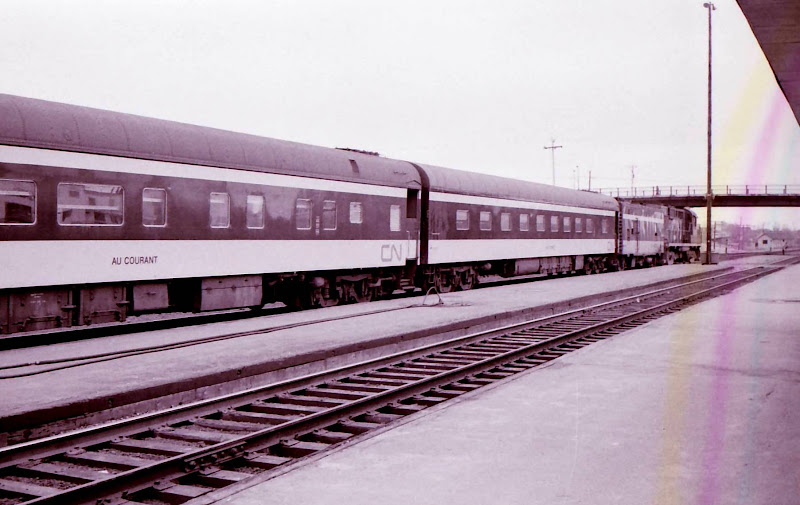 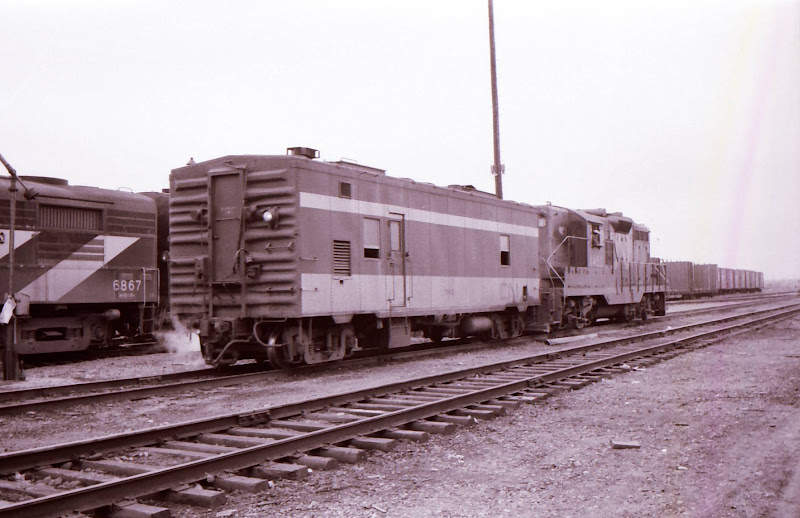 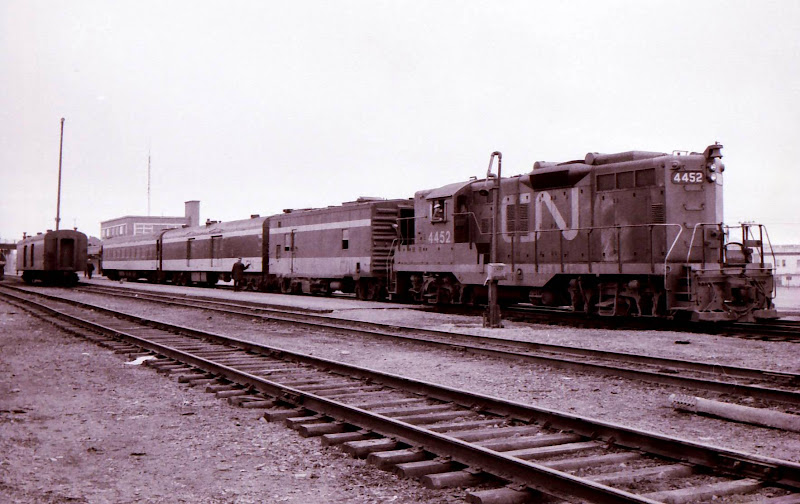 We were running on the National Transcontinental Railway. Originally constructed from Moncton to Winnipeg and still busy CN mainlines on the eastern and western ends but the section we were on that afternoon saw little use and would eventually be abandoned into Cochrane. Here’s a couple of shots at the small community of La Sarre, Quebec: 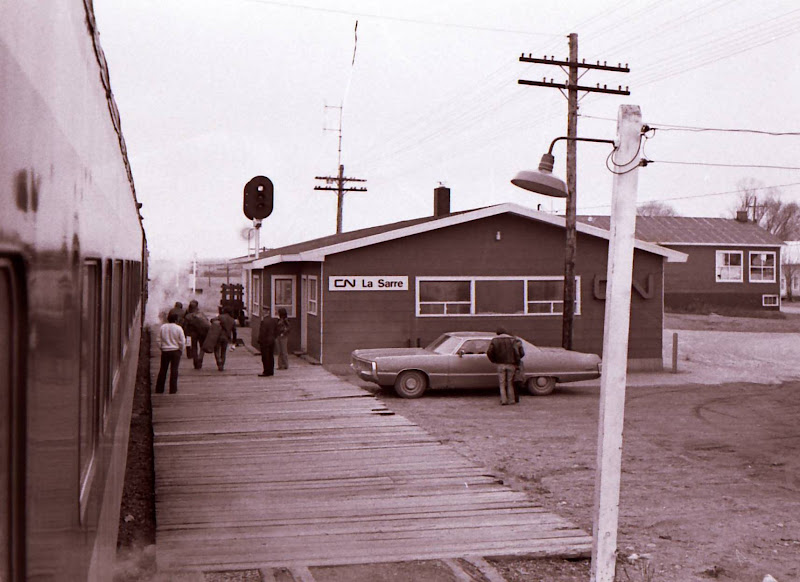 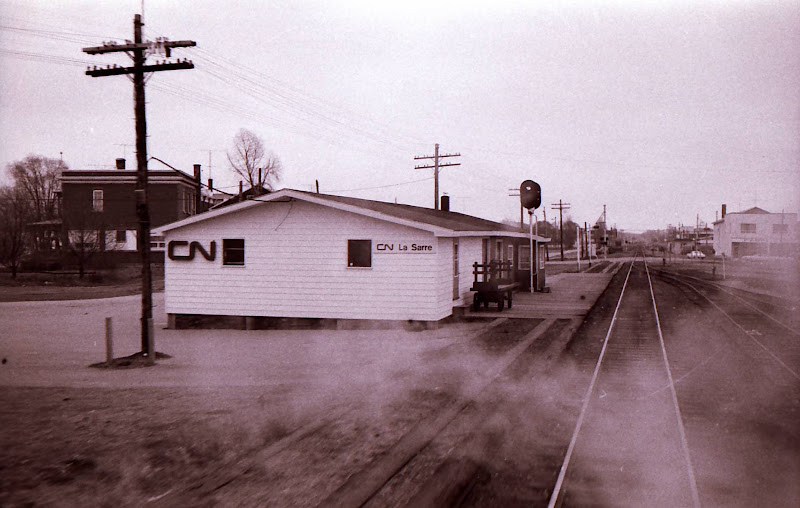 It was dark now on a late fall afternoon when we arrived at the joint CN-Ontario Northland Cochrane Station.....and an hour for supper in the Station Restaurant before the'Northland arrived at 7pm. 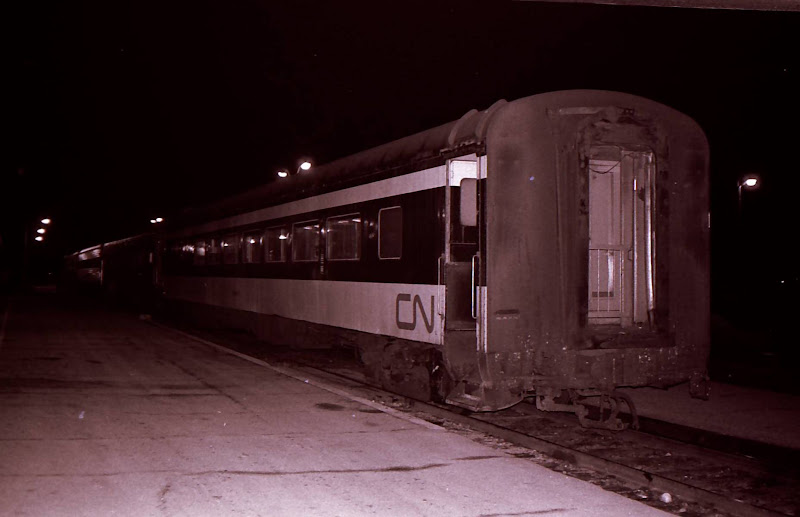 The Northland was another train that underwent quite a transformation along the way. It departed Kapuskasing (Kap-us-kay-sing) on CN. The Ontario Northland Railway took over at Cochrane..... then it went back onto CN at North Bay for the remainder of the run into Toronto. And as it made its way south, the consist expanded considerably.

I had a roomette in Green Gables a former Bangor & Aroostook Railway sleeper. I wanted to stay awake for North Bay to follow our route through that city......then an important junction on the east-west CN & CP transcontinental mainlines, crossed by the north-south ONR-CN route. But the comfortable roomette following the previous two long days and nights in a DayNiter and coach.....I just slept right through. 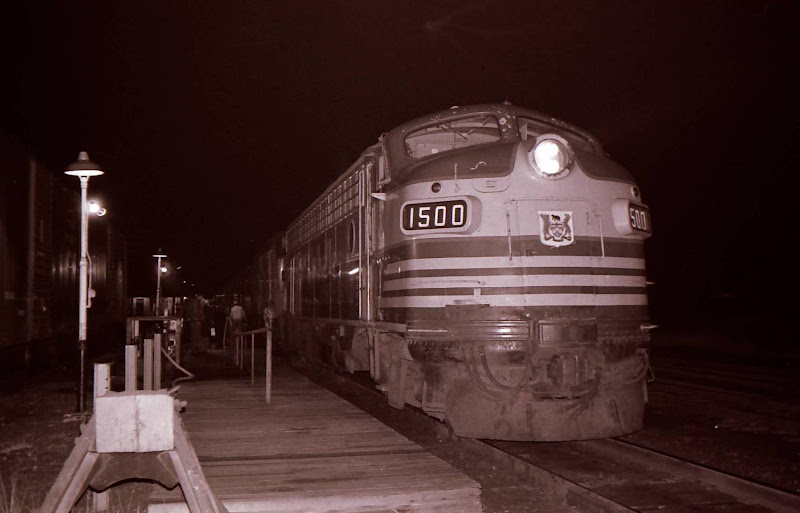 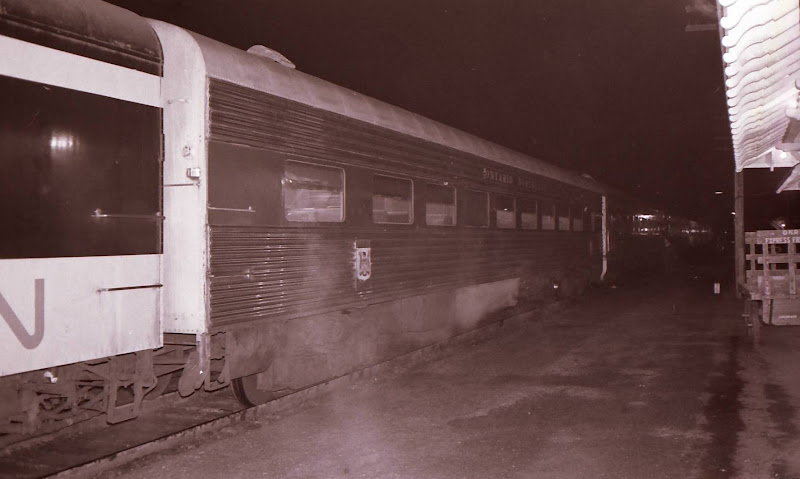 We arrived in Toronto at 7:30am and I went to the ticket counter to see if there was any word on a settlement in the strike. Nothing......but they did hope to be running to Montreal that afternoon so I spent the morning riding the TTC Subway and Streetcars.....and GO Commuter Trains out to Pickering and back. 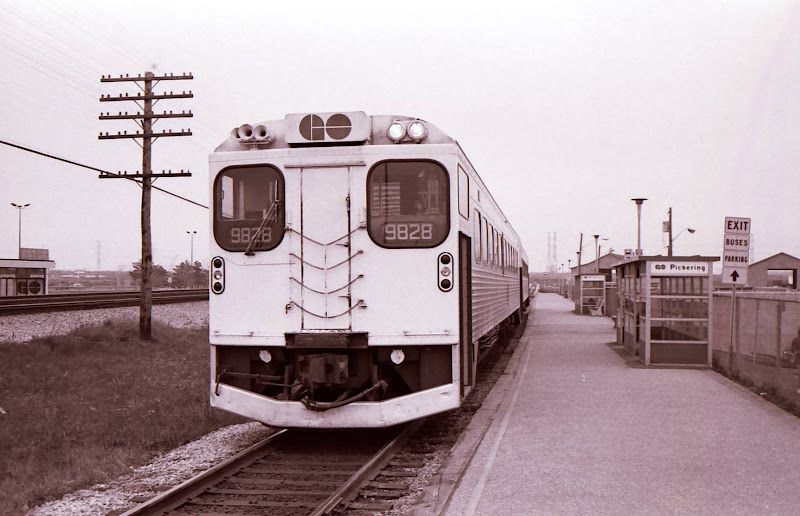 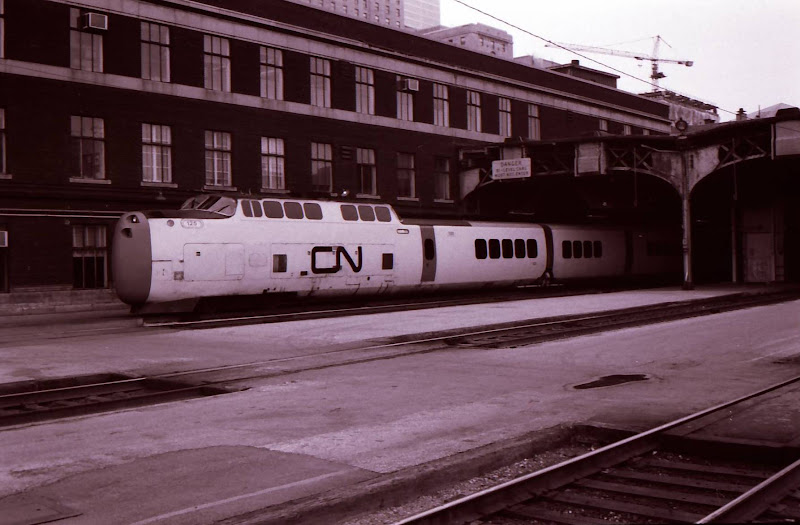 Arriving back at Union I noticed the TURBO sitting in the station and after a brief moment of thinking I might be on my way.......another disappointment.........No, nothing would be running to Montreal......but if I could get to Levis, the Scotian I had a reservation on would be leaving from there early the next morning. So now instead of the 4 hour TURBO ride I was looking forward to, I found myself on a 6 1\2 hr (340mile) bus ride to Montreal. A 3 hour layover there then back on another bus for 3 hours and 160 miles to Levis.....arriving at 1 am. I wasnt the only one trying to connect with the Scotian so the bus driver even went out of his way to drop us at the CN Station.

But when we walked in the Agent knew nothing about the Scotian running east from there that night and could only offer us free tickets back to Montreal on the westbound Ocean from Halifax due in 3 hours at 4am. They did hope things would be settled and they could run all the way into Montreal. But not so.......when we reached St. Lambert just across the river from Montreal.....the picketers were blocking the tracks and they bused us over to Central Station.

Thats it!..... Enough!.....and I headed out to Dorval to fly home. Eastern Provincial had a737 to Charlottetown, Prince Edward Island then onto Halifax. In the photo below.....as we started down into Charlottetown I spotted the CN railcar ferry making its way across the Northumberland Strait.

After the quick stop on PEI ....it was over to Halifax for a late afternoon arrival. I had plenty of time to get a bus downtown to a busy CN Station to catch a Railiner for home. We stopped briefly in Truro where we should have met the eastbound Scotian from Levis and Montreal (he train I should have been on) Then the Railiner continued onto Stellarton and I actually arrived home, on time, on the train I had planned to be on in the first place! 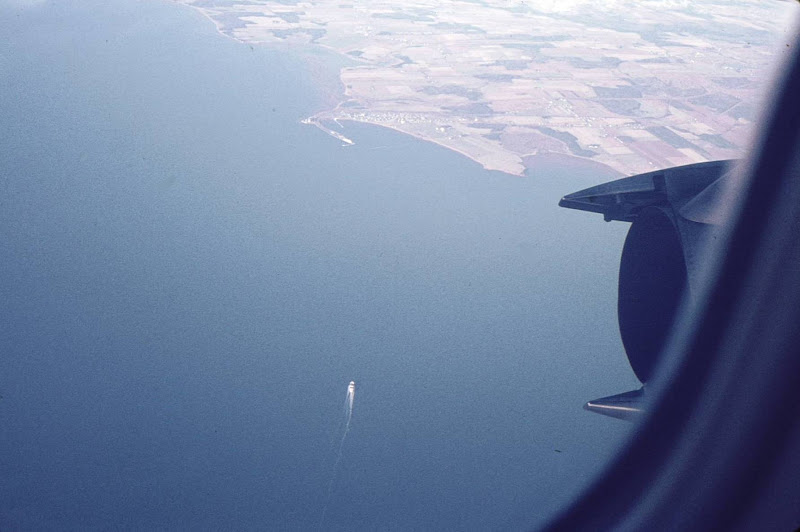 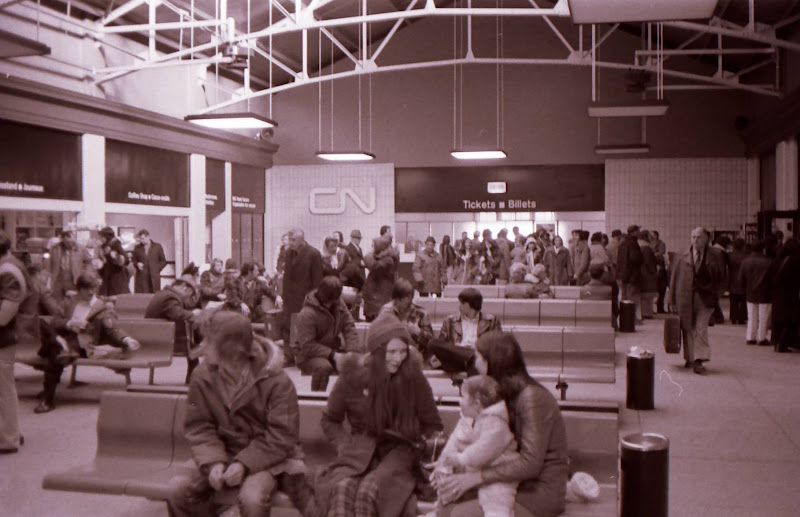 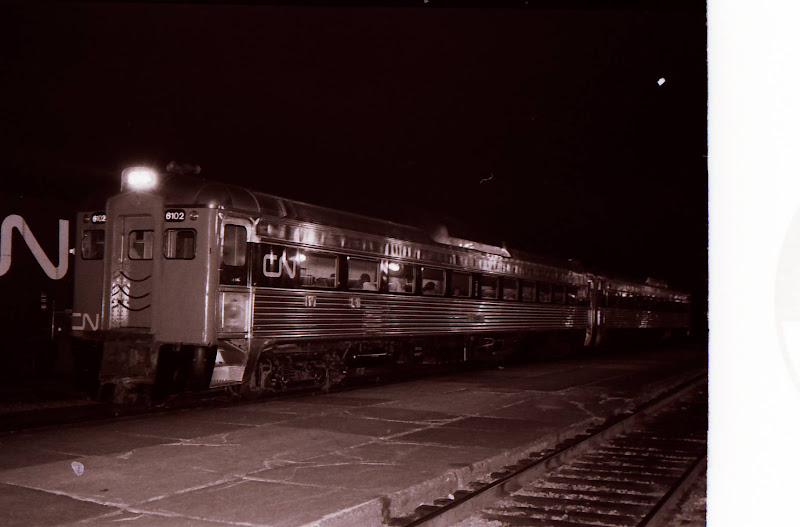 *6712 & *6714 were ancient GE Electric Box Cabs. They hauled the entire consist out of Central Station through the 3 mile Mont Royal Tunnel. At Eastern Jct. the electrics cut off and returned down into Central Station. CN 6712 & 6714 had been in service since the Tunnel opened in Oct. 1918 and were actually still hauling commuter trains nearly 80 years later on the last day of operation in June 1995. The Mont Royal Tunnel (now AMT’s Deux Montagnes line) reopened later that year using new Bombardier Electric Multiple Units. 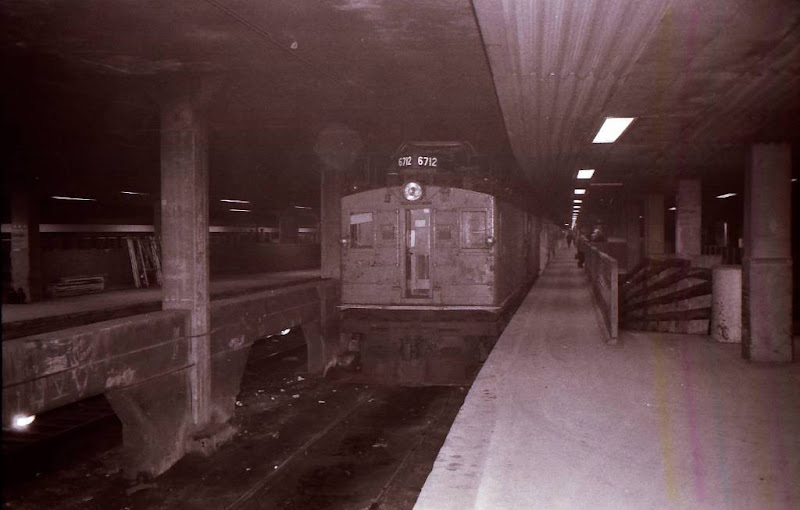 And arrival into Chicoutimi early the next morning: 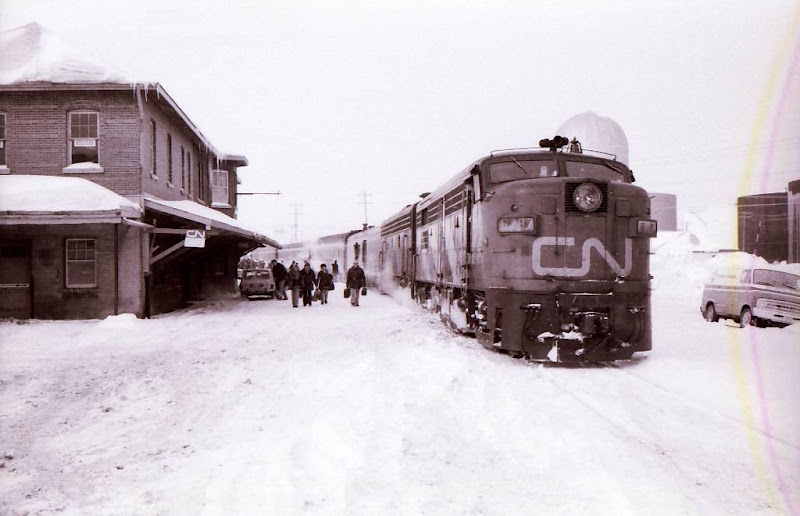 Today’s VIA #601-#603 follow a similar route: Montreal to Hervey Jct where they split into sections for Jonquiere and Senneterre but no longer exit Central Station through the Tunnel. They now follow a route west through the city and around Mont Royal....to rejoin the original route at Eastern Jct just north of the tunnel.

As usual most enjoyable,truely an adventure in the Great White North that could have become a trip from Hell but became a wonderful memory!

Really enjoyed your report and the journey back into history of Canadian trains. Those pics from the early 70s reminded me of my college days. Such great clothing we wore back then..

Wonderful trips, thanks for sharing. It makes me very sad to have missed (by about two decades!) the opportunities for such adventures.

Meanwhile... was that a BMC Mini in Chicoutimi? Handy all-weather runaround!


NS VIA Fan said:
And arrival into Chicoutimi early the next morning:

A very interesting trip with historical photos. Thank you. I'm from Chicoutimi (but today, I live in Quebec City). I'm born in 1979 so I remember the last years of the train in the city center before the track was cut at Ha Ha Bay Junction (near the Alcan aluminium smelter of Arvida) in 1988. This shorted the VIA route to Jonquière, closing Chicoutimi and Arvida stations.

Today, the area is very different from the photos posted here, no more oil tanks on the port that is a park. But the train station is still here, it is a kind of commercial center, with a beautiful paint of a steam locomotive, you can see it on google street view.

The former track is now a paved path for bicycles between the railway bridge on Chicoutimi River and Alcan smelter. Between the bridge and the Chicoutimi station, this is almost "abandoned". There is a good video on youtube of the last day of the train in Chicoutimi, but watching this make me very sad.


The other thing is the Arvida Station that was transformed in....funeral home ! At least, it was not demolished :giggle: