Iowa is terrible, and other thoughts.

(I apologize to any Iowans who read this. I'm sure you're a lovely person with many great qualities.)

I am so bored on the delayed Zephyr #6 right now that I'm starting my trip report early.

When I got on the Zephyr at 6 this morning in Lincoln, I was so happy to be back in a roomette. I was also excited because my excellent SCA from my last trip, Nathan, was my SCA once again. And since the delay had caused people to cancel their plans, he moved me to an upstairs roomette instead of #13 that I was booked in.

Knowing I was only booked in coach on the way back, I realized that would be untenable. I called Amtrak to see if any roomettes had opened up. One had, as well as two bedrooms, the bedroom being only $20 more than the roomette! So I'm booked in a bedroom for the way back, which will be my first.

My good friend is picking me up in Chicago, she works quite near the station and her plan was to pick me up after work. I told her last night it'd probably be a couple hours delayed, and then texted her this morning saying to make it a three hour delay. Then after sitting in Omaha, I told her it was looking like she'd pick me up around 8. Then 10:30pm. Now Midnight. My friend is more annoyed at Amtrak than I am. I'm pretty positive and hey, I'm still on a train, right?! What's to be grumpy about?

Growing up in Nebraska I had plenty of reasons to hate Iowa. It's right next door which makes it convenient. Their football teams sucked, plus I dated a male ("man" is too generous) who was from Iowa, and was a die-hard Hawkeyes fan. And was also the worst. Just the worst.

Dinner was Amstew though, so I can cross that off the bucket list. And we're moving along at a pretty good click, which helps the spirits. Every click of the rails brings us closer to the glorious Mississippi, and thus my salvation from this desolate place.

When I'm back and sane, I'll add some pictures and make this more coherent and more train-details-y, but I just had to write to SOMEONE to cut the boredom and make me feel productive.

Thank you for your time, this has been a public service announcement.

Hope they rest of the trip is better for you.

I feel your pain, but I was on a 8 Hour Late Zephyr across Nebraska from McCook to Omaha and have to say that Iowa isn't any more boring, and not nearly as desolute! ( Yes, West Texas is really bad too!).

Good Karma to have a good SCA and snag the Low Bucket Bedroom, even if you did get to experience the culinary delight of Amstew!

I'm sure Nebraska is just as soul-crushing if it's not the motherland it is for me! At least Nebraska mixes it up with a few sandhills thrown in, though they're not terribly noticeable from the train.

I do have to say the Amstew was pretty good, the rice and roll helped immensely. Not my least favorite Amtrak meal!
C

Hope your friend gets the pizza before the shops close.

I'm making this trip in a few weeks and will definitely remember to pack some wine to enjoy in my roomette if we are very delayed into Chicago.

Booze is the only thing that gets me through Amtrak delays. For real.

I'm with you on the corn thing. I've also done the "so many regrets in one roomette" thing. While the CZ had some amazing scenery, I spent that entire trip making a pro/con list and arguing with myself over whether I should break up with my now-ex-boyfriend. So if you're in roomette #3 in the rear car, beware the bad juju. There were a lot of tears shed in that room.

On the other hand, I also drank a lot of wine on that trip, so the vibe may not be that bad.

I'm in roomette #4 in the rear car, so I think some of the juju leaked across the hall I'm glad I'm not the only one whose slowly lost their mind in a roomette. In the rear car of the Zephyr.

We've been sitting outside of Clinton, IA for an hour waiting for permission to proceed. Did I mention that Clinton is the home town of that terrible ex of mine? This is somehow all his fault.

LOL! I hated Arizona and it's freaking deserts.... When we were starting our 8 day odessey with a tight deadline, the stupid Sunset Limited was delayed... first by a chemical spill then a broken track then 2 crew deaths...... at one point I was so mad at looking at the same spot of desert, I threw a temper tantrum and went to the upper bunk so I just wouldn't have to look at the same dang spot in the desert..... I do have to giggle since I included a picture of that sign and every time I see it I shudder over the torture! 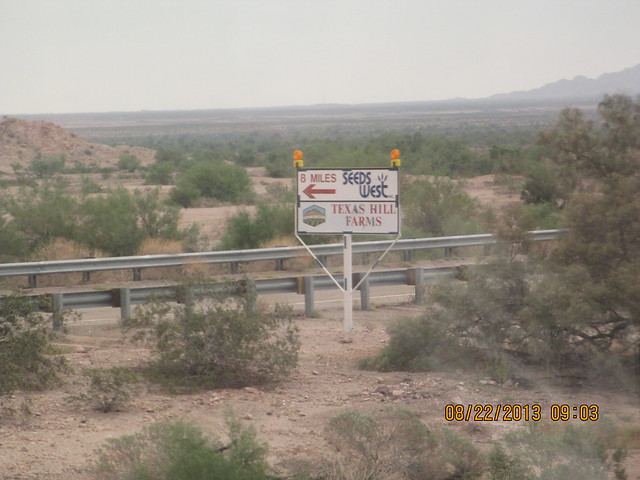 It is totally your ex's fault. He's a jerk.

That is a bleak picture. It's like the sign is mocking you. "You could have been to that seed store and back eighteen times by now!"

Always good to be able to blame an ex for bad karma! LOL

Every place has some bad to desolute scenery, but somehow it doesn't seem so bad when on a train compared to driving or being on a bus!!

Baileys and some good music can work miracles in my experience!

Hope you make it to civilization soon, the cornfields of Western Illinois are pretty boring also!

I have some friends that live in Clinton. None male (at least that I know of,) so no issues there.

They must've been out of town, as they would've let the train through right away.
E

I actually lived in Clinton, Iowa at one time and yes, it is all your ex-boyfriend's fault that this happened.

Hah! Good to know we're all on the same page

We ended up getting into Chicago Union Station at 4:30am which, if you're keeping score at home, is around 13 hours late.

Cina said:
Hah! Good to know we're all on the same page

We ended up getting into Chicago Union Station at 4:30am which, if you're keeping score at home, is around 13 hours late.
Click to expand...

However sucky the delay was, it sure made for good reading for the REST of us, thanks. "Been there, done that" too, up to 24 hours late, even had to switch trains once, en-route, as Amtrak made us go BACK to Chicago.......

It's been decades since I had those UBER-Late experiences, don't know how I'd deal now, at my age. Am I more patient, or less? Dunno.

I do know to EXPECT to be late, just not the order-of-magnitude late.
C

Going Amtrak Central Florida to Philly in September. Have arranged our schedule so nothing to do till the day after we arrive. Wife says she's looking forward to the trip. We'll see she says after!

Glad you made it in finally! Yes, that sign did mock me which probably threw me in the temper tantrum! Hope the rest of your journey runs easier... our trip was perfect after that train...but my husband will never do that train again! I've reminded him that we should have slept through that part.....

and I will add another vote for putting the blame on your ex!
F

Your ex is going to have a lot of 'splainin' to do when he meets St. Peter. :giggle:

Cina--It sounds awful. But thanks for keeping your good humor and giving us some entertaining reading!

Chucktin--Central Florida to Philly is a nice trip, but it does make sense to rest when you get there and start your full day of activities the next day.

Also, some people think the scenery on the Silvers route is boring, but I don't think so, and especially not after reading about all that dreary scenery above. I couldn't stand being away from my rivers and ocean (although I will grant you that NYP to WAS is horrible and a good time to read a book).
S

I'm from California but Iowa is my mom's home state and the county is actually Boone so I feel what you're saying! Now, picture seven people in one car with five of them being kids and you can understand my 'love' for our childhood trips there. We spent many 'happy hours' debating whether we were looking at corn or milo.

Milo has a reddish or yellowish tassel-like protrusion on top. Sorry, couldn't help it! :lol: I enjoy looking at the corn around my town plenty, but yesterday drove me crazy! I'm enjoying the sky scrapers of Chicago but part of me just feels like they're in the way. It's a little smothering here xD

Cina said:
I'm enjoying the sky scrapers of Chicago but part of me just feels like they're in the way. It's a little smothering here xD
Click to expand...

When I was hanging out in Chicago in May it occurred to me that you can't see storm clouds headed your way with all those tall buildings. Luckily there were none that day.

Location
rollin along the high iron

Iowa has been good to me! I married a great girl from a small town in South Central Iowa (112 people). It is on the Burlington mainline. Her father worked for 37 years as a section foreman for the CB&Q. Oh, the name of this town it is MELROSE IOWA!