zephyr17 said:
Based on my luck that my watchful waiting for my NYP-EVR trip turned out, now booked, with fares inventory being allocated from all high bucket to lowest bucket on the Lake Shore and second lowest on the Builder, I did a check on days in October that the Zephyr arrives in Emeryville one day before the Sunset/Eagle leaves LAX. It appears that some inventory reallocation has taken place, because the fares vary quite a bit now:

To me, that indicates at least a first round of inventory distribution adjustment has taken place. Only 3 of 13 departures are now high bucket.

I don't know your planned itinerary, but October and November now appear to have been reallocated and it is the time to strike if any of the middle or second lowest bucket dates appeal to you. They typically only have a couple of rooms in the lowest allocated bucket, and I would never hold out waiting for a low bucket when a second lowest is available. Of course, you could score on 10/30.

That kind of search is what is needed to track down good fares. Amsnag made such searches easy, now they have to be done by hand. It isn't worth doing until there is a good chance that they've done an inventory adjustment after the initial allocation, spot checks are good enough in the first few months.
Click to expand...

I also just took advantage of low buckets in the fall. I just booked Southwest Chief from CHI to LAX, Coast Starlight from LAX to EMY, and California Zephyr from EMY to CHI. Dates are 10/26 to 11/1. Roomettes for all 3 segments. Low bucket pricing for the long segments. I didn't pay attention to the CS bucket, since I wasn't going the full distance. Total trip for $1458. Not bad at all.

I debated on whether to just go with Business Class for the CS segment since it's just 12 hours. But since it was only $272, I decided to splurge on the roomette. I may need a nap at some point.
Last edited: Jun 22, 2022
T

Looks like there the bucket prices might be changing. Just went and looked prices on the Coast Starlight and was shocked to see how high some of the prices were.

I also looked at fares for the Empire Builder and a few other routes, but those appear to be the same as they have been (for now at least).
N

Right you are! Now all we need to do is wait for the other shoe(s) to drop (figuratively speaking).
N

FWIW, according to the fare bucket charts the last increase occurred sometime between May and November 2021 and affected all LD trains.
N

This change plus the increases in accommodation charges have seen the average Roomette fare on the CS for one adult increase by about 20%.

Have yet to see any fare changes on the other LD trains, but I only churn up enough ambition to look a few times a month.
N

Here's a chart with the only new CS fares I could find. No idea why there were 6 Bedroom fares instead of the usual 5. 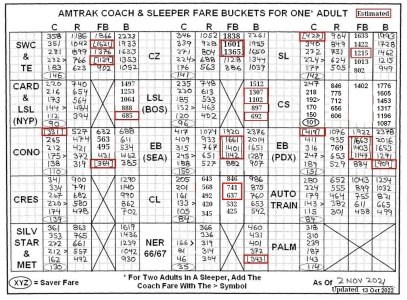 niemi24s said:
Here's a chart with the only new CS fares I could find. No idea why there were 6 Bedroom fares instead of the usual 5.

Thanks for putting this together. Sad to see even the low bucket is up over $150 for a roommate and over $200 more in a bedroom.
T

niemi24s said:
Here's a chart with the only new CS fares I could find. No idea why there were 6 Bedroom fares instead of the usual 5.

I was playing around and there appears to be a seventh(?) bedroom bucket. $991 for a bedroom SEA-LAX on 6/1. I will insert an app screenshot but website quoted the same price.

Thanks for that input. Wonder how many different Bedroom buckets there really are? Maybe there's an additional Roomette bucket lurking somewhere.

Noticed somewhat the same thing last year for NER 66/67, but then the sleeper was pulled from that train. (I keep forgetting to delete that train from the chart).

MODERATOR NOTE: Please be reminded that this forum is designed to provide information to new riders and answer frequently asked questions. The description of this forum is:

"This forum provides basic information about Amtrak travel including tips of value to first time riders. Members: please post your insider travel tips in this forum. This forum is intended to be an information resource. For Amtrak questions or start a discussion, please use the Amtrak Rail Discussion forum."

I know we've had a number of posts regarding Amtrak sleeper prices, and I do appreciate that, in times where everything is getting pricey, Amtrak sleepers have priced themselves beyond many of us. But, here is one little data point: We are taking our nine year old daughter to Disneyland from...

Thank you for your understanding, cooperation and participation.
T

niemi24s said:
Here's a chart with the only new CS fares I could find. No idea why there were 6 Bedroom fares instead of the usual 5.
Click to expand...

Found an eighth(!) bedroom bucket and a second family bedroom bucket (finally). I wonder if either of these (particularly the bedroom) is the low bucket.

Thanks for those two new fares. As a WAG, methinks the $936 Family Bedroom fare is the second lowest bucket. Maybe.
Last edited: Nov 7, 2022
T

Found one of the ‘missing’ family bedroom buckets for the SWC.

trimetbusfan said:
Found an eighth(!) bedroom bucket and a second family bedroom bucket (finally). I wonder if either of these (particularly the bedroom) is the low bucket.

And here’s another family bedroom bucket for the CS. $1263.
N

Thanks for those additional fares.

Other than the CS having 8 Bedroom buckets (3 more than the norm), the other strange thing (to me, at least) is its buckets increase in a roughly geometric progression (ratio between successive steps nearly equal) whereas those of other trains increase in a roughly arithmetic progression (difference between successive steps nearly equal).

This version has what seems to be the latest known buckets for the Coast Starlight. No estimates were made for the other Family Bedroom buckets. 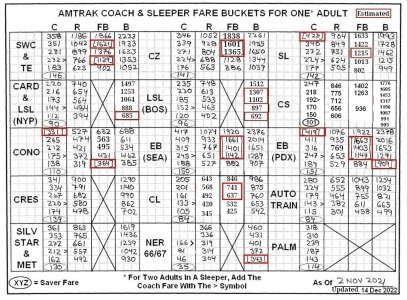 Are there days of the week or days in advance of trip that have lower fares? or is it random like rolling dice?

Somewhat random, with some logic. Here's the "Fares 101" level of my understanding, I'm sure others will be along shortly to throw rocks. Some may tell you that it's no better than a random number generator, but be assured there are Real People, looking at Real Data that we're not privy to making adjustments as time goes on, and those people probably aren't complete fools. There's logic there, even if it's sometimes maybe poor logic or invisible logic.

In the Good Old Days, nearly every train opened 11 months out at low bucket, which meant the early bird truly got the worm. As Amtrak's revenue management gained some rudimentary sophistication, they realized that "hey, this train for the day before Thanksgiving is almost certainly going to sell out, so why are we selling tickets at low bucket?" and fares would open 11 months out at a higher level.

As time passed, this became more and more widespread, and at this point it's more like "open high, if it sells slowly we can lower them and sell tickets 5-6 months out". Sometimes that happens, and sometimes because of demand the prices just stay high and they successfully sell the train out at higher fare levels (particularly in this day and age of reduced capacity).

As far as days of the week, I'm not sure that there's enough of a "rule" there to count on. Variability for the specific train and the specific dates probably overshadows any specific rule on dates.

The general algorithm for "how can I increase my odds of traveling Amtrak on the cheap(ish)" is to look at these charts (or a scattering of fares for the endpoints you're looking at if you're not riding end to end) to get a sense of what the range of prices for your particular journey are. Start watching fares as early as you can for the time period when you're traveling. Buy tickets when they're available at a price you're willing o pay. Continue watching fares. If they go down, call Amtrak and ask that the fare be adjusted to the lower rate on offer at the current time. If they don't go down, live in the satisfaction that you probably didn't miss out on a cheaper fare and enjoy your trip!
F

Ryan said:
Start watching fares as early as you can for the time period when you're traveling.
Click to expand...

This is really the key, and also, if your dates of travel are somewhat flexible, check every departure within a week or 10 days of when you'd ideally like to go.

My general impression is that Amtrak now opens reservations 11 months out at a mid-level price bucket for all rooms, and the price then goes up to higher buckets as more rooms sell. But at some point or points three to six months out, they might switch to lower buckets on particular departures that aren't selling well. So that's the period when you might find comparative bargains.

On some routes at least, the starting price may be lower for November-April (excepting the holiday periods) if demand normally is lower at that time. Also, pricing for roomettes and bedrooms appears to be adjusted separately based on sales of each room type. So on a particular departure one can occasionally find a lower-bucket bedroom even when the roomettes have kicked up to higher prices, though more often bedrooms advance to higher buckets more quickly because the inventory is smaller.

Recently I bought a round trip to ALX from ORL over the last weekend of March. While I was watching the fares I saw them bounce up and down across three buckets over a short period of a week. Finally I grabbed the lowest bucket in the gyrations the best I could.
L

jis said:
Recently I bought a round trip to ALX from ORL over the last weekend of March. While I was watching the fares I saw them bounce up and down across three buckets over a short period of a week. Finally I grabbed the lowest bucket in the gyrations the best I could.
Click to expand...

Ultimately I got Star because the times suited better, Arriving ALX Sunday afternoon and departing ALX Wednesday afternoon. But both trains' fares were jumping around.
N

DaveW said:
Are there days of the week or days in advance of trip that have lower fares? or is it random like rolling dice?
Click to expand...

After about seven years of messing with fares I'm not into making any sort of prediction. Some don't seem to fluctuate at all and others jump around like a flea on a hot brick.
N