My review of my Gathering train trips - October 2021

Finally, home at last!
PALMETTO Train 90 -- Washington Union Station to Baltimore Penn Station (Coach class)
Rating * * * * - Points off for crowding (really, they couldn't add on a couple more coaches in DC?) and running late. But I did get a $4 refund for this segment.

My original connection to Baltimore was for Northeast Regional Train 148, departing Washington at 2:55 PM, arriving at 3:36 PM. That one was a misconnect as soon as the Amtrak locomotive on the Capitol decided to go kaput a mile outside of Pittsburgh. I had hopes of making Northeast Regional 186, which leaves at 7:05 PM, but considering that we pulled into the station at 7:02, that wasn't going to happen.

I went up the escalator and over to the Club Acela, and asked them what they could do for me. After some clicking around on the computer, I got a seat on the Palmetto, scheduled to leave at 8:30 PM. Even better, I got a $4 refund, as the fare for the Palmetto was less than that of 148 in a busier time of day. (Although "busier time of day" doesn't mean "more crowded," as we shall see.

So I was stuck in Washington for an hour and a quarter, and I decided to see how good old Union Station was doing. It was a ghost town, and not what I remembered back in my days when I actually traveled regularly through the station at that time of day (about 7:30 PM). When I returned a couple weeks later, it seemed to have gotten busier, at least during the early afternoon. 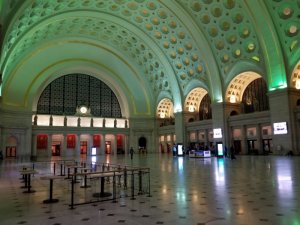 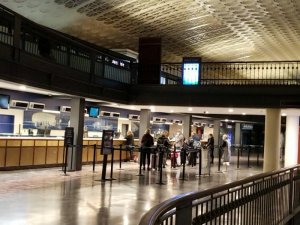 These folks were trying to get alternate connections. A little tricky if you were heading to Virginia and didn't rebook to the Silver Meteor enroute. I think I overheard staff offering an overnight for someone trying to get to Woodbridge or Fredericksburg. I would probably be cheaper for Amtrak to just pay for a taxi to get them home. 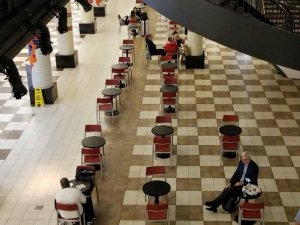 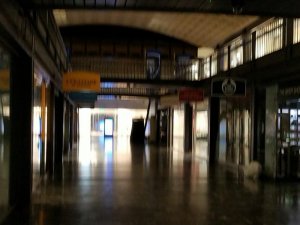 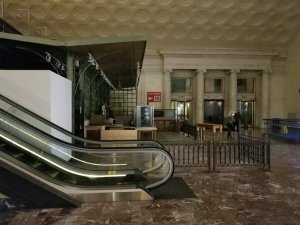 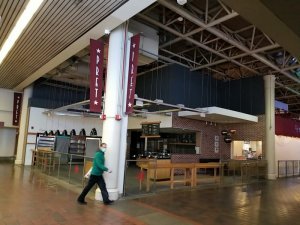 When I returned to the Club Acela, I found out that my train was now scheduled to depart an hour late!

Here's the sorry tale of Train 90 on October 18. It lost some time whole traveling through the Carolinas, but departed Richmond only 4 minutes behind schedule. Then something happened in northern Virginia, I don't know what, but it arrived in Alexandria on hour and 5 minutes late. Fortunately, there's a lot of padding in the schedule between Washington and Alexandria, so it was only 47 minutes late into Washington, and they got us loaded and on our way only 23 minutes behind schedule.

However, the later arrival meant that the loading was a little chaotic. Of course, because it departed from the lower level, we had to leave the lounge and join the cattle line to go downstairs. Then it turned out that the consist was only 3 coaches, the cafe, and the business class car. Given that this is the only train to serve the NEC between 7 PM and 10:30 PM, it would seem that they need more than 3 coaches to accommodate the crowd. And there was a crowd, at least in relation to the number of seats available. Fortunately, I found an aisle seat, but I had a heck of a time finding a place for my suitcase.

In any event, the 40 minute ride to Baltimore was uneventful, we lost no more time and arrived about 19 minutes behind the advertised. I had no trouble finding an Uber, and soon I was home. Another Amtrak long-distance adventure was behind me. Where will my next one take me?
D

MARC Rider said:
I decided to see how good old Union Station was doing. It was a ghost town,
Click to expand...