Normal For Sleepers On Rear And Coach In Front?

On our 4th of July trip up to San Francisco, I saw the CZ in Martinez CA. I noticed that the sleepers were attached to the rear of the train and the coach on the front. How do they decide which order to attach the cars? The Sunset Limited that we were on in January had the sleepers in the front and coach in the back. It makes sense to put it in the back if its a train like the Empire Builder or Texas Eagle that needs to decouple along the way but on a train such as the CZ that does not need to split along the way is there an order on where they attach what? 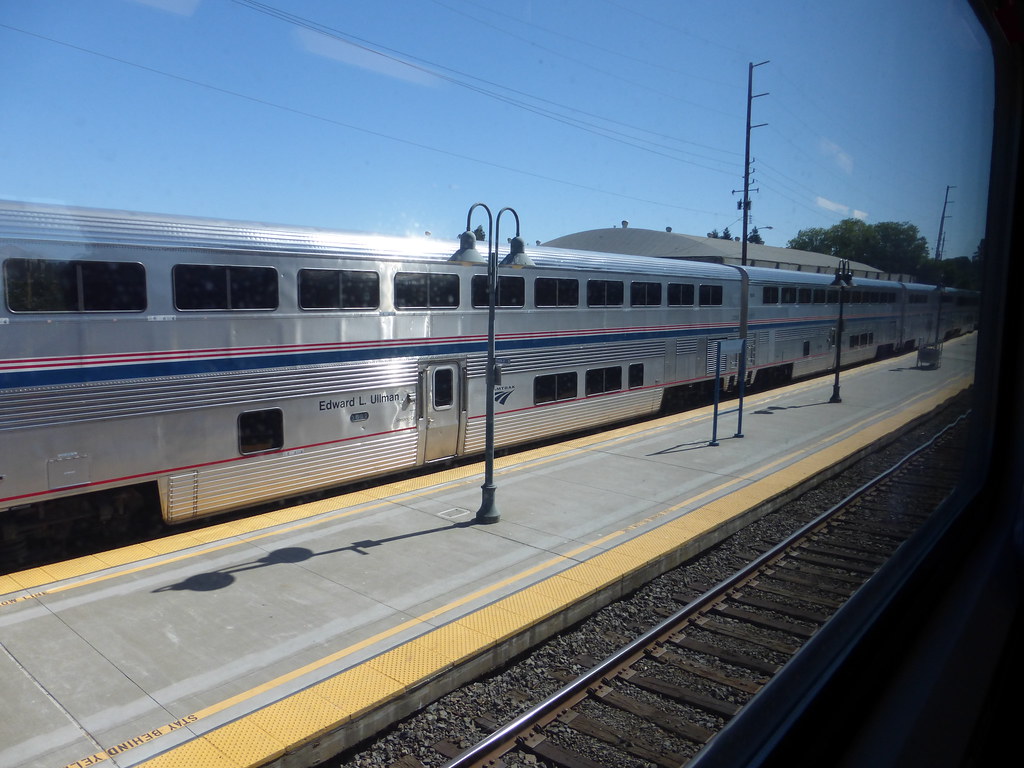 Actually, the CZ does indeed do a "split" along the way. In Denver, the last sleeper from #5 is removed from the rear of the train and re-attached to the rear of the returning #6. That may be part of the reason that the sleepers are at the rear, i.e. to keep them all together. Of course, the transdorm will always be at the front.
T

I could never figure out why there was no set place for the sleepers on Amtrak trains. Sometimes they are behind the baggage car and at other times they are the last car (s) on the train. What was particularly puzzling is why the sleeper was the last car on our Cardinal trip in June. At Indianapolis two coaches of the Hoosier state were attached behind us making the sleeper in the middle of the train. On the Empire builder sleepers are in the middle and in the rear of the train. This makes sense as the train splits in Spokane; the front half to Seattle and the rear half to Portland.

Location
Whatever siding I'm sitting on!

These days the Sleepers are generally at the rear of the train. In the eastern trains the baggage car is the last car of the train, behind the last sleeper.

Pre-Amtrak tradition was to usually put the Sleepers (Pullmans) at the end of the train if the train carried both those and Coaches. My understanding was to keep them further back from the horn noise. Today I imagine it has a lot to do with convenience for switching and yard work.

Up until a few years ago, the norm for Amtrak was sleepers up front, unless there was a good reason to do something different.

On the Superliner equipped trains, they still usually run with the sleepers up front, unless there's a reason to do something different (like the EB split or dropping the sleeper in Denver). Also, those trains will run reversed if there are private cars that need access to the "main" train. If you look closely at this video, you'll note that the transdorm is on the rear and the coaches are running up front:

I personally like the sleepers behind the baggage at the front of the train, you get to where you are going sooner then if at the back of the train

On one trip I was in the last sleeper car without anything else behind me. The ride was bumpy. I hope what people say is true that the baggage at the rear helps keep the ride smoother.

Snakes on a plane, sleepers on the rear. It's that simple. :giggle:
B

OlympianHiawatha said:
Pre-Amtrak tradition was to usually put the Sleepers (Pullmans) at the end of the train if the train carried both those and Coaches. My understanding was to keep them further back from the horn noise. Today I imagine it has a lot to do with convenience for switching and yard work.
Click to expand...

But actually there was much more switching around in the past Set out sleepers ,thru sleepers, trains having multiple desttnations like the Empire Builder,,etc, etcmuch more than today, That thing about horn blowing sounds like today's generation not being used to it
B

Is there more horn blowing these days? (many more crossings?) Just wondering.

Actually there may be less horn blowing in cities since so many places have put in quiet zones which require double gates and lights! As for the rural areas, there are so many unmarked crossings, especially in the South, that horn blowing is almost continous on some routes!

The train horn doesn't bother me and I like to be close to the Diner and Lounge which are usually next to the Revenue Sleepers on most LD Routes! When the Sleeper is on the back end without a trailing car ( baggage, PVs etc) it tends be a case of the tail wagging the dog! YMMV

I live less than 100 yards from tracks that run dozens of commuter trains and (when running) the daily 448/449, plus many freight. There are no grade crossings for many miles in either direction, so I seldom hear any horns.

When I do hear the horns, if the train sounds like it's going slowly I think I understand it, as it may mean track work is in the area, but when it's obviously going full speed, it's hard to figure out why they would blow it.

I have wondered if Amtrak celebrates on it's first day back after bustitions.
F

In the past generation or so, there have been a lot of grade crossing elimination projects, so I'm sure there are fewer grade crossings to blow for.

The usual arrangement in the old days was baggage cars on the front, coaches next, diner in the middle, and sleepers at the rear. I was always told that the traditional reason was that they wanted to keep the sleepers farther from the noise and smoke of the steam engine. If cars were to be dropped off and added enroute, this arrangement might be adjusted to suit. In its last days, B&O's train 17, the Cleveland Night Express, arrived in Cleveland with only three cars: a combination baggage and snack service car; a coach; and a 10 roomette, 6 bedroom sleeper. East of Akron, these cars were carried on another train in that order, so the separation of coach and sleeper passengers on the longer train couldn't be maintained.

When I rode the Seaboard Air Line's diesel-powered Silver Meteor in 1967, the sleepers were ahead of the coaches, separated by the diner. The boat-tail observation car was for all passengers, both coach and sleeper; but sleeper passengers had to walk all the way back through the coaches to access it. There was a combination bedroom/lounge car for sleeper passengers only, positioned just ahead of the diner. Its lounge seating area had high windows that curved into the ceiling, similar to the curved window in a sightseer lounge.

My understanding is that these decisions are mostly based on the switching requirements enroute and at terminals. The Silver Meteor was a Miami train, but cars for St. Petersburg were cut out enroute, and the specific switching operations may have dictated the order.

The Auto Train is never turned: sleepers on the north end; coaches on the south, with the auto carriers always trailing.

On that trip on the 1967 Silver Meteor, I remember that all three E unit diesels faced forward. I believe one unit was cut out to handle the St. Petersburg section, while the other two took the major portion of the train into Miami. With two engines facing forward into Miami, a failure of the lead locomotive can be dealt with by simply swapping engine positions. There would be no need to find a turning facility on short notice to keep the train going.

There can be a lot of factors taken into consideration, but the final determining factor generally is efficient operation.
Last edited by a moderator: Jul 21, 2014

I recorded this on the star about 9:30 at night around Raleigh.

This is about average. This is the 10 car (I think). So I am thinking there is another sleeper, baggage till we get to the twin diesels.

Sleepers in the front please, the horn is music to my ears.
W

I do prefer that the sleepers be on the end. It is so much quieter. I've never really noticed whether the ride is rougher or not, but that's probably because the baggage car is on the very end.

SP&S said:
Sleepers in the front please, the horn is music to my ears.
Click to expand...

William W. said:
I do prefer that the sleepers be on the end. It is so much quieter. I've never really noticed whether the ride is rougher or not, but that's probably because the baggage car is on the very end.
Click to expand...

I too am in the Sleepers in the rear camp. Fortunately in the last trip that I took last week all the Sleepers were in the rear. I even had the roomette adjacent to the rear railfan's window in the last car of the California Zephyr and loved it. I don't particularly care about horns, and if I did I could simply listen to recording of the same on my hi-fi system all day long without bothering to get on a train anyway.

I experienced "sleepers on the rear" for the first time last week, and I loved it. I was a bit bummed the baggage car was blocking the railfan window, as my roomette was near the end of the last car, but that was a small price to pay.

Anyway, I couldn't figure out what felt so strange until I realized I couldn't hear the horn. When I did, it was so distant that I didn't even notice it after a while. It was so peaceful.
Last edited by a moderator: Jul 22, 2014
H

From 1988 until 1997 I rode the Crescent from Slidell, LA to WAS on business at least every other month. The sleepers, initially Heritage, then Viewliners were always up front, and I loved it because the ride was smooth and I slept like a baby. Then in 2010 my wife and I took the same trip. Sadly it was miserable because the Viewliners were the last two cars. We were whipped and bounced and rocked. It was a little better north of ATL, but not much. Face it, with the exception of the NEC, these are freight company rails and freight cars don't complain. The most unfortunate part of that trip was that I had oversold my wife, so now she refuses to even talk about train trips....we drive. ARGH!

On the single level trains the Sleepers are rarely the last car these days. There is usually a baggage car behind the last Sleeper these days.
Last edited by a moderator: Jul 23, 2014
D

What is the "railfan window"?
W

Durham57 said:
What is the "railfan window"?
Click to expand...

It is the window on the rear door of the train. It is the only one that allows you to see directly behind the train. The other, less common window can the the door on the very front of a Superliner car, when the transdorm is not on the front. I was lucky enough to be on a CL one time that had this configuration.

Durham57 said:
What is the "railfan window"?
Click to expand...

It's the window on the rear door of the last coach or sleeper car of the train. When they don't put a baggage car behind it, it gives you a lovely view of the tracks and scenery.