Just got two emails from AGR saying my redemption was successful. I have not done anything and my AGR account online shows nothing.
Anyone else get an email?
S

Well, at least we know someone is not stealing our points.
S

I got 2 for a 5 segment redemption I made last week. A week ago, their computers were incredibly slow.

On 4/22, after waiting more than 30 minutes on the AGR phone line, I gave up and booked each segment individually as it's impossible to book a multi-segment trip online with points (unless they are hiding the 'use points' button somewhere I haven't found on the MS booking page). I received no confirmations via email until 5-6 hours later. The last of them arrived 8-9 hours later! So then I have to wonder...I did 5 separate redemptions. Where are my 2 other useless emails?

I think the Amtrak website is getting progressively worse instead of better as they claim. Using my Android cell phone, changing seat assignements on the Acela only brings up the first row or two of seats. The rest of the entire train is blank. So I tried via my Windows desktop computer...it shows the cars OK, but it only allows one (1) seat to be changed, not 2 as I and a friend are traveling together desipite my indicating and paying for 2 travelers on that reservation. I had no choice but to call AGR to get it swtiched. Obviously, they must like paying people to answer the phone rather than getting their website fixed!

I got six - probably for redemptions over the past few months. No points were missing, but out of an abundance of caution I changed my password and enabled 2FA (via email, since they don't appear to support software or hardware tokens.)
P

I have not redeemed anything for years and got two.

Three here; my wife got two!
We have had no such activity recently and our "activity" when logged in is correct.
I've messaged AGR to see what they say.
Amtrak IT again?

I received one email and my account seems to be OK. I have a large upcoming redemption in October.

Got a pair of emails with the above subject line this evening, matching up nicely with a pair of redemptions I made...

Did the "Centre of Excellence" strike again with emails from over 6 months ago? No recent transactions on my account, points balance looks correct.
R

Received three redemption e-mails here too. Logged in and saw no suspicious activity in the transaction history. I suspect the phone lines will be busy tomorrow.

Just got two emails from AGR saying my redemption was successful. I have not done anything and my AGR account online shows nothing. Anyone else get an email?

I got 16 emails in the course of five hours saying the same thing. What redemption? Another Amtrak glitch,obviously.

I got seven. If/when anyone hears from AGR what the heck is going on, please post explanation here. No time for me to follow this up today....
T

So glad that this is under discussion, I’m new to the site. I received 2 emails a couple of days apart. I thought they were phishing emails so went to the official website to check my balance. However, the site wanted me to change my password. I ended up calling Guest Rewards. The agent confirmed that it was just a glitch in the Amtrak system. When I asked about the website asking me to change my password he thought that it might be a related/another glitch. I’m going to see if I can get in without changing. Thanks for starting this discussion. 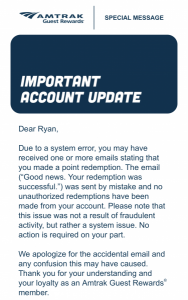 You beat me to it.
Z

Nice to see one thing at Amtrak that is consistent, their crack (head) IT operation...

That's just what I would expect a phishing operation to say.

I feel left out. I got no redemption emails. Everybody hates me....no one likes me....think I'll go eat worms.

Devil's Advocate said:
That's just what I would expect a phishing operation to say.
Click to expand...

Funny (unrelated) story. The computer system at work started adding [Non-DoD Source] to the beginning of the subject line of all emails that originate... outside the DoD...

Dumb, but mostly harmless. However, that sort of thing is proliferated to all sorts of garbage being added to subject lines, occasionally even more than one, so now we get garbage like: [URL Verdict: Neutral][Non-DoD Source], or my personal favorite [TRUSTED SENDER], which is... "just what I would expect a phishing operation to say"...