A company operating a railroad in whole or in part in this state may demand and receive for the transportation of passengers on its railroad, a fare not exceeding three cents per mile, for a distance of more than five miles, but the fare shall always be made that multiple of five nearest reached by multiplying the rate by the distance.

Thus, the max fare they can charge between Toledo and Cleveland is $3.48.
It is a distance of 116 mi * 0.03 cents per mile.
Does anyone else know of any other odd laws related to trains in their state? 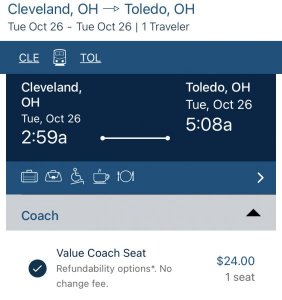 Several of these were voided by the Interstate Commerce Commission decades ago, using federal preemption powers. I guess Ohio doesn't clean up its statute book very often. (New York often does.)
G

Location
finally! Back in Mississippi

Like Neoroden said. It was determined by various court decisions that railroads came under the definition of Interstate Commerce, and that many of these various laws could be construed as impediments to Interstate Commerce, hence making them in violation of the constitution. There were multiple abuses in state regulations. An example commonly used was that under Texas regulations fares and freight rates from Marshall TX to Shreveport were higher than those to many places in Texas that were far more distant from Marshall than Shreveport. More recently, many urban area restrictions on train speeds were preempted as being impediments to Interstate Commerce.

I also know from having read the Staggers act and other related acts from the deregulation era that that was the time period when the feds fully overrode state regulations on rail. I can't remember which state this was, but one state required a 6 person crew and the neighboring state required a 7 person crew, they literally had to have another person jump on board at the state line for the hell of it. Now that is set by the feds along with basically every other regulation whenever they get around to flexing their regulatory muscle.

A lot of states don't clean up their books. I once lived in a city that had regulations about quartering your slaves still on the books and this was in the 90s. So its not just rail regulations and statutes that don't get cleaned up from time to time.

Full crew laws in Oregon and Washington into the 1970's exempted trains of three cars or less. That would have protected branch line trains and interurbans from over-staffing had any of them still been running.

My favorite in 1970's ORS was that conductors had "powers of sheriff" -- presumably to form a posse to go after masked men? Choose the most useful of the powers for Amtrak conductors (from the South African GCM Legal site, but reflects English Common Law):
Or, the current ORS:

The sheriff is the chief executive officer and conservator of the peace of the county. In the execution of the office of sheriff, it is the sheriff’s duty to:
(1)
Arrest and commit to prison all persons who break the peace, or attempt to break it, and all persons guilty of public offenses.
(2)
Defend the county against those who, by riot or otherwise, endanger the public peace or safety.
(3)
Execute the process and orders of the courts of justice or of judicial officers, when delivered to the sheriff for that purpose, according to law.
(4)
Execute all warrants delivered to the sheriff for that purpose by other public officers, according to law.
(5)
Attend, upon call, the Supreme Court, Court of Appeals, Oregon Tax Court, circuit court, justice court or county court held within the county, and to obey its lawful orders or directions. [Amended by 1985 c.339 §1]

And in detail when there's a problem on board, ORS says that powers of sheriff include:

When an officer finds, or has reason to apprehend, that resistance will be made to the execution or service of any process, order or paper delivered to the officer for execution or service, and authorized by law, the officer may command as many adult inhabitants of the county of the officer as the officer may think proper and necessary to assist the officer in overcoming the resistance, and if necessary, in seizing, arresting and confining the resisters and their aiders and abettors, to be punished according to law.
(2)
National Guard members are exempt from any service commanded under subsection (1) of this section while they continue to be active members. [Amended by 1961 c.454 §209; 2007 c.255 §12]

On a more serious Oregon note:

That was cited in 2008 as authority to stop me from taking this photo from a county road. 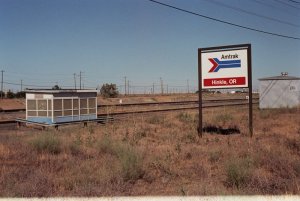 Practically all of New York State law is very tidily codified in a highly organized fashion. Federal law is much more of a mess. Some states are more of a mess than the Feds -- and most cites are worse.