The New Upgraded Flex vs Kosher Option - Which do you prefer?

With three LD trains in the East and the TE, I had plenty of opportunities to compare the new flex with the Kosher Option. There will certainly be many differing opinions… "Here are my personal opinions and impressions... other points of view are inevitable as experiences vary. By keeping open minded and flexible, we can all learn from each other."

It seems that the new flex menu has greatly improved the tastes, textures, and quality of the hot entrees… nice! Tasty! I enjoyed the oriental salmon, the chicken, and the breakfast. The portions seem to be tapas sized… a hungry person may want two of these to feel satisfied but only one per customer per meal. The salad is not a salad… it's a bite… similar to a sample passed out in a store so customers can taste a new salad dressing. But not enough to be considered a 'course.' Rolls? Never got one at breakfast; sometimes not at lunch or supper. The desserts are same same same… the brownies are thick and delicious… but there are no other varieties when other options are available from vendors. Sooo… although the small snack meal may be enough for some, my experience talking with other passengers was that they were greatly disappointed in the smallness of the 'meal snack' and 'same ol' brownie.

I found the kosher meals to be very satisfying. The hot dish seemed to have more food than the flex hot dish… was high in quality but minimal with sauces and toppings. A little tabasco greatly enhanced the flavor for me. What I really liked was the 'cold pak' that made it into a meal… for breakfast this included a bagel, cream cheese [could be great over the egg], breakfast sweet roll, OJ, butter or margarine spread, salt, pepper, creamer and sweetener for coffee. It just seemed to be a lot of food. The cold packs for other meals included a roll, margarine, a small grain based fresh cold salad, a rich dessert, coffee condiments, and frozen water cup which helped keep things cold. Actually this was more food than I could eat and left the rolls and desserts for a later time. Pics below: Top... the new flex meals; bottom... Kosher offerings

My preference is Kosher above the infamous flex offering… however the new full service dining in the West is the best food to be had on Amtrak trains.

What are your thoughts and opinions??? 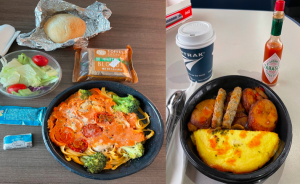 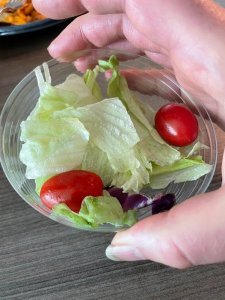 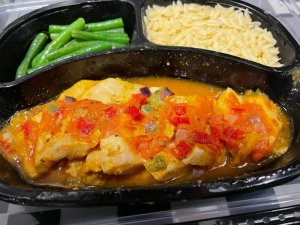 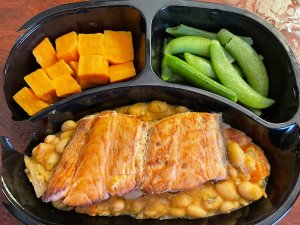 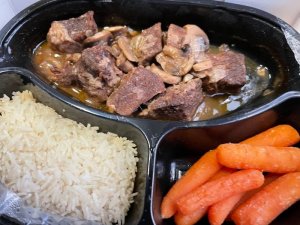 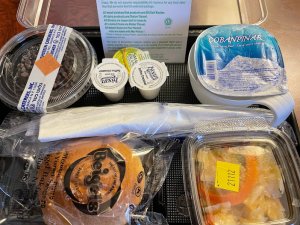 A little confused as to which pictures are Kosher - the bottom one obviously but the 2 above?
D

There I fixed it for you.

AmtrakMaineiac said:
A little confused as to which pictures are Kosher - the bottom one obviously but the 2 above?
Click to expand...

Danib62 said:
There I fixed it for you.
Click to expand...

Yup... the two top pics are the flex offerings with the infamous flex 'one bite' salad. You're right Danib62... it is called the sesame glazed salmon... but I did get carried away because it did taste so authentically Asian... yum!

Looks like the same old stuff. I am allergic to salmon and avoid beef so whats left? As for Kosher, they may be better meals but they can still have food preservatives in them.
M

Sorry, I know my rabbi is probably going to have me put in herem (or cherem, look it up on google), but the kosher meals are inferior. Yes, there may be a bit more food, but it is food not worth eating.

True, the fish entree was ok, the chicken was Ok, and even the beef, with a rather watery gravy was edible. And I was pleasantly surprised that the beef and chicken weren't a salt lick, always a problem with kosher meat.

However, the starch (rice, orzo, whatever) left much to be desired, and usually ended up overcooked.

Then, there's the cold tray, which is frozen and needs to be thawed in time so that you pasta salad isn't a pasta popsicle, which happened to me last night. In addition, there's a very dry menozos roll, which is also probably kosher for Passover, as it appears to be made of sawdust, not flour. Of course, the spread is not butter, but a non dairy fake. I had 3 of the dsserts. there was a dry choco cake, a semi decent banana cake, and a pretty good choco creme puff.

But the real stinker is the breakfast. It's an omelette with roast potatoes and ratatouille. The potatoes and ratatouille aren't bad, but the omelet is vile. I couldn't eat it, and this morning, I bagged it and got the Flex French toast, which was perfectly edible and had a decent sized portion. Of course, it's not homemade, but it was ok.

So, in conclusion, the kosher meal is really for people for whom keeping kosher both in the home and outside is important. Otherwise, I'll take the flex meal and look forward to when dining on the eastern trains is upgraded.
M

Oh yeah, and "salad" is pasta salad or chickpea salad. Can't freeze lettuce, and in any event, the cost of checking the lettuce for bugs makes fresh salads uneconomical in the commercial kosher food world.

Had the beef this evening on the CONO and for sure this is far from fabulous food… was a bit salty but filling… and restating that it’s a bit less tasty than the new flex. And yes… the frozen part was still frozen… couldn’t eat the salad.
D

MARC Rider said:
But the real stinker is the breakfast. It's an omelette with roast potatoes and ratatouille. The potatoes and ratatouille aren't bad, but the omelet is vile. I couldn't eat it, and this morning, I bagged it and got the Flex French toast, which was perfectly edible and had a decent sized portion. Of course, it's not homemade, but it was ok.
Click to expand...

That’s interesting because as someone who orders the kosher meal I feel like the breakfast is the strongest offering of the bunch, though I still supplement with plenty of kosher items from the continental offerings.

Thank you all for offering your points of view… keeping things interesting!
B

The kosher meal looks a lot better than the Flex meal. How early do you have to book it? I have a trip tomorrow and was thinking of upgrading to the sleeper.
D

They need 72 hours notice for kosher meals on a sleeper reservation, 24 hours for Acela first class.

All this indeed is highly processed with lots of salt and fat. It becomes a question of preferences from what is available. IMHO I find it advantageous to bring along fruit, peanut butter, nuts, etc. to supplement their offerings.

Location
All over the United States

After 4 days round trip BHM-WAS-CHI and return, I think I've had all the new ones. Salmon was still cold in the middle. Beef was better than the previous beef, but still not good. The omelet is slightly improved, but still....pass. The only thing I had that was remotely edible, was the french toast. And that was marginal, at best.

Shortline said:
After 4 days round trip BHM-WAS-CHI and return, I think I've had all the new ones. Salmon was still cold in the middle. Beef was better than the previous beef, but still not good. The omelet is slightly improved, but still....pass. The only thing I had that was remotely edible, was the french toast. And that was marginal, at best.
Click to expand...