For several times in the 21st century I used a pension in former East Berlin as a base and then made excursions radiating from it. This built on a suggestion by my sister that given my interests I should concentrate on learning a lot about a few places rather than trying to checklist a lot of countries. As well, I was interested in getting European software into use by North American transit systems, so I stuck with countries where I knew some of the language.

These notes just unearthed in my retirement turmoil are transcribed from what I wrote at the time except for spelling and abbreviation corrections. [Bracketed material added here.] On this segment there was no glamor but there was a chunk of German film lore, autobahn history and a visit to Dessau, home of the Bauhaus.

17 Jul 2010 – in the pension met a couple at fruhstuck today who are from Wald Vraiburg. This is where Verspaetung in Marienborn / Stop Train 349 was filmed.

They explained that young men of the community were costumed in American, GDR, and Soviet uniforms for the film.

I explained to them that I knew the rail cars in the film came from Bahndirektion Muenchen but this other info was the answer to a mystery for me.

Yesterday, I came across a BueSo group in downtown Koepenick advocating restoration of the independent DM. They were gathering names in a petition. Turned out they are part of the Lyndon LaRouche group. Long discussion about economics, which I had to switch to English for. Their guy disappointed that I would not sign petition or donate.

Also, another group gathering signatures against privatization of water supply.

Need to get going. It is too easy to sit looking out my window at huge trees and checking my watch against the occasional yellow flash of passing tram. [The neighborhood's beloved Line 68 which BVG wanted to replace with a bus.]

On Saturday I worked my way to Marzahn by streetcar all the way. No problems. Rode a bus from end of M6 tram to Hoenow U-Bahn Station.

Hoenow U-Bahn Station was built by GDR, their longest extension. It went to greenfield high-rise apartments that were not directly served by S-Bahn or potential S-Bahn routes.

It turns out that it is not in Hoenow. It has a vast bicycle park-and-ride and a bike/ped path linking it to village of Hoenow.

Walked around Hoenow and visited its church (built 1255), then had lunch at the village smithy’s building, nicely converted to a typical German country restaurant. Had typical fish filets and boiled potatoes and a big strawberry & ice cream desert. This is season for local strawberries, town is bursting with them.

Walked back to U-Bhf (suburban bus was on 120-minute headway in Fare Zone C) and enjoyed ride on an 8-car artic train, completely open through from end to end.

Had currywurst en route for dinner.

19 Jul 2010 – Long ride west to Onkel Tom’s Hutte. Met Reinhard at his home. We made a shaky bicycle trip into the Grunewald. Visited a lot of the areas where Reinhard spent time as a kid, I recognized some of them. [Ride not shaky for Reinhard, retired police sergeant, who loved exploring his southwest Berlin.]

Bike was shaky for me because I had not been on one since 2002 visit to Netherlands. [Actually, in hindsight this was one of the first symptoms of Parkinson’s.] I just about crashed into him. We walked the steeper sand hills.

We made it back for Sunday Dinner: pork goulash, croquettes, fresh vegetables and fruits in salad, beer, and a [illegible] to close. Reinhard and I swapped stories (mostly his). Some off-color, but women did not seem offended. Angela made the dinner but [with] teamwork from Andrea, a neighbor lady who is a family friend.

After dinner we all piled in Reinhard’s car and drove out to Grunewald again to see the autobahn prototype or model of the South Curve for the Avus. I don’t completely understand this and need to do some research. Apparently, this was built by [Hitler Youth] volunteers and then Hitler came out and approved it [in a media event]. It is hard to find in the bushes. Then we walked part of Kierans Range which is being returned to forest. I learned that it was cleared before the war as part of autobahn construction plans. U.S. Army found it perfect for a firing range. [I qualified with my M-14 in 1969 and never visited the place again till now.]

We went back to Reinhard’s place for coffee and strawberry shortcakes. [Reinhard gave me two shells that were stamped DEN 1943 that he had found in the forest. They came from the Remington Arms plant in Lakewood, Colorado and would have begun their journey on the rail line that we were using for the West Line LRT.] Then long ride home. Still light out [Berlin same latitude as Edmonton], so walked through woods to Italian place in Alt-Schmoeckwitz for ice cream cone, watched boats from bridge, then tram back to Karolinenhof.

20 Jul 2010 – Trip to Dessau went smoothly. As in 2008 a fast ride to Wittenberge, but this time transferred there. Hard to read station signs at speed. Wittenberge sprawls – main rail station is not in the original center of town. Old town is about 1 km away.

Regio train from Wittenberge to Dessau made another stop in Wittenberge. Then a warm trip through small-town stops – AC not effective at the 30 plus degrees Celsius. Crossing Elbe a disappointment on big bridge due to metal sheet cladding, but other bridges over floodways and Muelde gave idea of why Dessau was settled early.

Matthias Mueller (Dessau transit staffer) met me at the door of my car! We rode strassenbahn to Stadtpark and then walked through a ped area that has markets/stores on street with balconied apartments above. This led to the Ratskeller where we had lunch. Portions as if we were going to work in the fields after lunch. I had Dessauer Eisbein and it looked like the whole cut. Neither of us could finish all the food.

Biggest problem for Dessau transit is declining population. Expansion plans put on hold, though lines they do have make sense on their own merits. Biggest problem today is no AC.

City has policy against overlapping bus and tram lines, so bus routes go into CBD on secondary alignment. We rode Line 3 out to the end – to greenfield high-rises, but not as formidable as Berlin-Ost.

In shop, saw second-hand Dusseldorf cars used for MoW and parts. Also saw their historic fleet, which includes a “Pullman”.

Return to the pension was slow due to a schedule change by DB that broke a connection at Wittenberge and then by IC train running late. Then BVG missed a trip on Line 68 tram, so even later. “Home” exhausted, then packed for Russia (and for storage of my big suitcase).

Here's a 2005 photo of an East Berlin greenfield development. 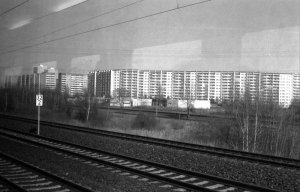