Earlier this week my wife and I took a short trip on the Pennsylvanian, NYP-HAR. I posted on another thread our generally positive experience at Moynihan. The trip was uneventful- the best kind!

Our Amfleet I business class car had a recent makeover and was extremely clean. Since the train reverses direction In Philadelphia we were at the rear of the train leaving NYP between the baggage and cafe cars. We left on time and were on time until west of Paoli where there appeared to be extensive track work which caused our Harrisburg arrival to be about 5 minutes late, which is on time for Amtrak.

The conductor scanning our tickets was extremely friendly- a far cry from PC days. The cafe attendant was also very friendly although we had a hard time communicating with both of us masked up and a large clear plastic barrier between us. Some kind of intercom was needed. The rest of the cafe car only had a couple passengers sitting in it. Our car was maybe 2/3 full out of NYP but many had left by PHL.

It was interesting to see the improvements at the mainline stations west of Philadelphia including Paoli with new high level platforms. The old, and unattractive, station appeared to still be in use. That was where I boarded my first solo overnight train trip at age 12. We flew by the interchange with the Strasburg RR at 106 mph. Harrisburg station hasn’t changed much over the years and could use a makeover but is a classic PRR station, especially with the GG1 parked under the shed.

A couple days after we returned home I got a survey from Amtrak about our trip. My comments to them are reflected here and in my Moynihan post. I do wish Amtrak could make the changes necessary to have connecting cars to the Capitol at Pittsburgh. Philadelphia metro area is too large not have a one seat ride to Chicago.
P

Philadelphia has a one seat ride, albeit a somewhat longer and 3 day a week one.

And truthfully, I’d rather see a one seat ride from Denver and/or Salt Lake City to the PNW and LA before Philly which already has two fairly convenient rides to Chicago.

PVD said:
Philadelphia has a one seat ride, albeit a somewhat longer and 3 day a week one.
Click to expand...

How could I ignore the Cardinal?! But, as you point out, a daily, faster ride would be preferable.

But, getting back to the Pennsylvanian, this is a train that performs well (at least as far as the portion I rode) and I hope PA/Amtrak underwrite a second daily service.
M

Palmland said:
Harrisburg station hasn’t changed much over the years and could use a makeover but is a classic PRR station, especially with the GG1 parked under the shed.
Click to expand...

I don't know what "over the years" means, but between the time when I last used the Harrisburg station in the mid-1970s and around 2010, when my daughter would ride the Pennsylvanian from college and we picked her up there, the station underwent considerable improvement, though it kept its basic configuration. The main improvement was that they installed high-level platforms. They also cleaned the place up quite a bit, although they didn't modernize the decor or anything. Another, more recent improvement that I saw on my trip last June in which I had to disembark involuntarily to be bustituted, was that they installed elevator to the platform directly in the main concourse. Back in the early 2010s, there was an elevator, but it seems like it was located in an out of the way place.

Anyway, here's a picture of the station from my June trip. It shows the old-time train sheds, one of the few still remaining at stations in the Amtrak system. 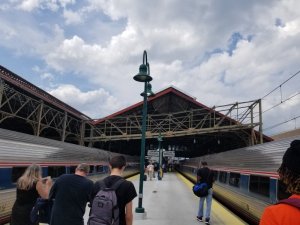 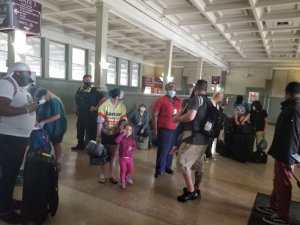