I regret my memory has failed me on many points of this trip. To find out what year it was, I had to look up the Rodney King Riots (1992), because I remember descending from Maui into LA through clouds of smoke. We were on a DC-10, and then flew 767's LAX- JFK and JFK-LHR--business class all the way on standby tickets.

One of the high points of our trip came on our first day in London--when we went to pick up our rail passes, we stumbled on the Queen's opening Parliament. It was quite a procession--the dignitaries all passed in Rolls Royces, followed by Royals in carriages. The Sceptre and the Crown each had their own carriage. We couldn't see the Queen's face, so we asked and found out that she would be returning soon, so we crossed to the other side. We also learned that Queen Elizabeth the Queen Mother was going to be right across the street from our hotel later that afternoon!

We had first class rail passes, and started out by traveling from London to Penzance on their "Pullman" service. We ordered our dinner soon after boarding at Paddington Station, then I believe the meals were loaded aboard in Redding. The food was excellent. We took several local trips, mostly on DMU's. I believe we took one train (another InterCity 125) all the way from Penzance to Scotland, where we took several more trips by DMU. In the Highlands we also rode a scenic train with historic cars (and passed The Royal Scotsman), as well as taking a steam train from Fort William to Mallaig. We rode an InterCity 225 (140 mph max) from Edinburgh to York, and caught the businessman's morning first class service from Shipley to London. The breakfast served included multiple types of artery-clogging meat or animal extract.

By the end of our stay, the Guards had stopped marking off days on our rail pass (although we had carefully budgeted). On our last day, we made a trip to Wales just for the heck of it. I have dozens of photos of the Royal procession, and there were hundreds of horses. Here's the Royal Pooper Scooper: Queen Elizabeth the Queen Mother celebrating the 75th anniversary of the YWCA: Plymouth on an InterCity 125: People brought their very-well-behaved dogs on the trains: Passing a luxury tourist train in the Highlands: Locomotive "The Boys' Brigade" in Glasgow BTW that bridge between Plymouth and Saltash is the Royal Albert Bridge.

And Redding is actually Reading. I have traveled through there changing trains more times than I can remember, usually returning from my work office in Winnersh Triangle to London every evening. The routing via Reading to Paddington was much faster than the milk run to Waterloo. After certain time in the evening you could even ride the GWR HST125s for no extra fare using a cheap suburban ticket. I tried to catch a nonstop one.

We actually stayed in Reading the last night we were there, getting off the train on the way back from Wales. There was convenient bus access from Reading to Heathrow, and hotels were cheaper than London.

The 125's were very comfortable trains to ride in first class. On the 225's (so-called because top speed was 225 kph), the seats did not recline but would rather rise up and lean forward to make it easier to eat.
M

Hey, this brings back my memories of my 1985 trip to the UK. I spent a week in London on my own, then met my brother and we rode up through Oxford, Birmingham, Shrewsbury, Cardiff, Bristol, and Cornwall. We only got 2nd class railpasses, which were fine. Most of the trains we rode were diesel. On the way back to London from Penzance (a 6 hour ride), we had dinner in the restaurant car. It was a splurge, 25 pounds, as I remember, but it was a nice steak, and they even had a cheese plate as part of dessert. Very few places, even in nice restaurants, do stuff like that today. For the rest of our trips, the rides were short enough that we really had no need to dine on board, though snack trolleys did come through in second class, and we'd occasionally get a cup of tea or a snack.

I do wonder if UK would have been better serveed to keep Britrail? We enjoyed a 5 day 1st class pass in 1992. Our only overnight was London to Inverness. it was marred somewhat by a digestive malady that cured itself in time to enjoy a light breakfast in the diner as we weaved through the highlands with sheep grazing by the track. We made good use of it the rest of the trip on day trains and was impressed with how clean and punctual they were. I kept thinking, if only Amtrak could be like this. But, for an overnight I much prefer a bedroom on a Viewliner.

Inverness is a fascinating City to visit. Very few people realize that just before entering the built up area of Inverness the train goes around a sweeping left turning curve around the Culloden Moors, where the famous Battle of Culloden (1746) was fought between the Royal Red Coats led by George II's son the Duke of Cumberland, and the Jacobite Rebels led by Charles Stuart, in what turned out to be the last major confrontation of the Jacobite Rebellion.
Last edited: Dec 5, 2020

We spent a night in Inverness, although the only photo I have is of a TV repair shop sign "Telly on the Blink." I did find this picture of Crianlarich, where there was orchestrated a complex meeting of trains, with joining and dividing. Here, the "trolley lady" transfers her cart from one train to another. I had to learn to drink warm beer. Thanks @Maglev for posting this......it brought back memories of my first trip across the pond.

It was day-break and I was on a StrathClyde Commuter Train heading into Glasgow Central. Was this real?....I almost had to pinch myself! I'd just crossed the Atlantic on an Air Canada L-1011 in 4 hours and 20 minutes (that's wheels-up in Halifax to wheels-down in Prestwick) We landed in what the Captain called a light Scotch Mist and that just set the mood!. Customs was a breeze and I was soon at Prestwick Station. 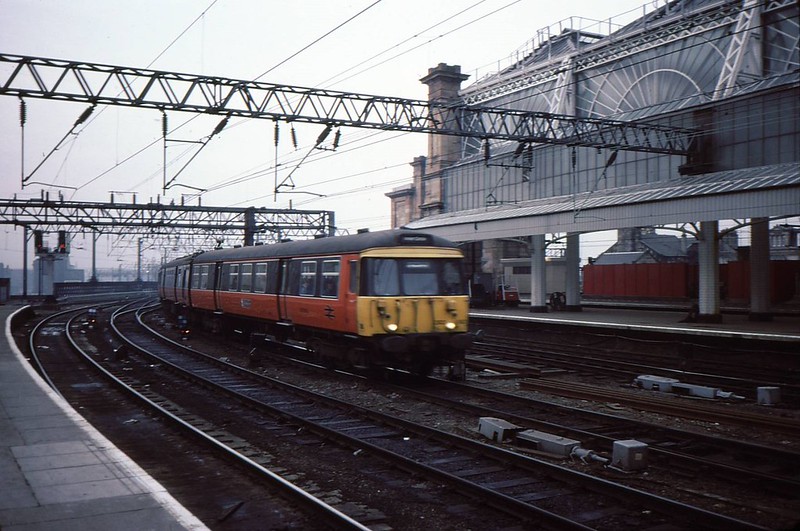 I spent the day touring around Glasgow planning to find a hotel later that afternoon. Then I realized I could get an “InterCity Sleeper” for a very reasonable supplement to my BritRail FirstClass Pass and at a fraction of what a hotel would cost me. I was aware of the Sleepers but not of the extensive network that was still available. 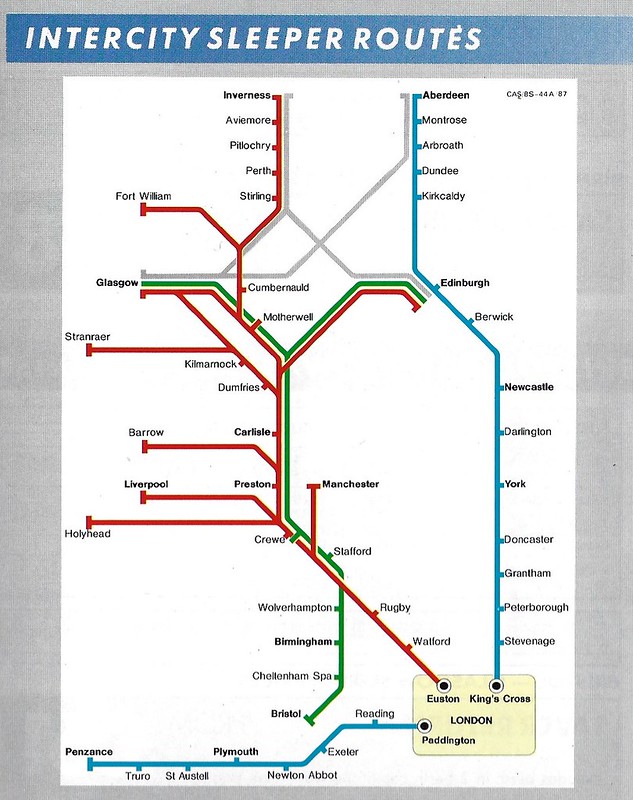 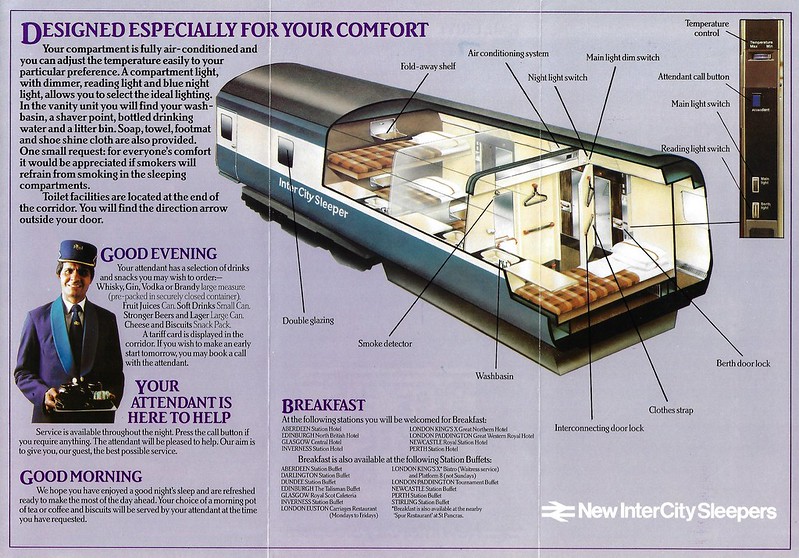 That first evening I boarded the “Night Limited” and headed for London and the start of my 14 nights of riding sleepers. You could usually get on awhile before departure then remain aboard long after arrival in the morning.......and there was always a wake-up call with tea and biscuits. 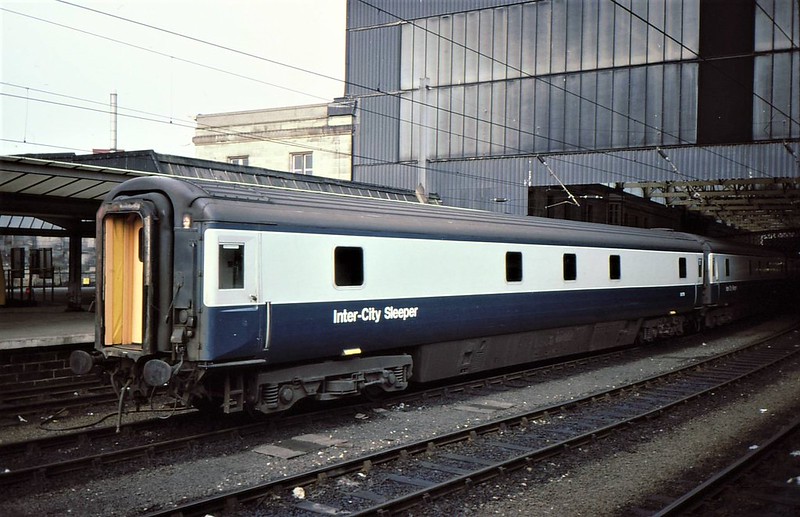 I criss-crossed Britain on that trip and certainly got the value out of my Pass. I would visit an area for a day or hop on a fast IC125 and return by Sleeper that evening. I rode the “Night Riviera” to Penzance and was there only long enough to cross the platform and head back to London. 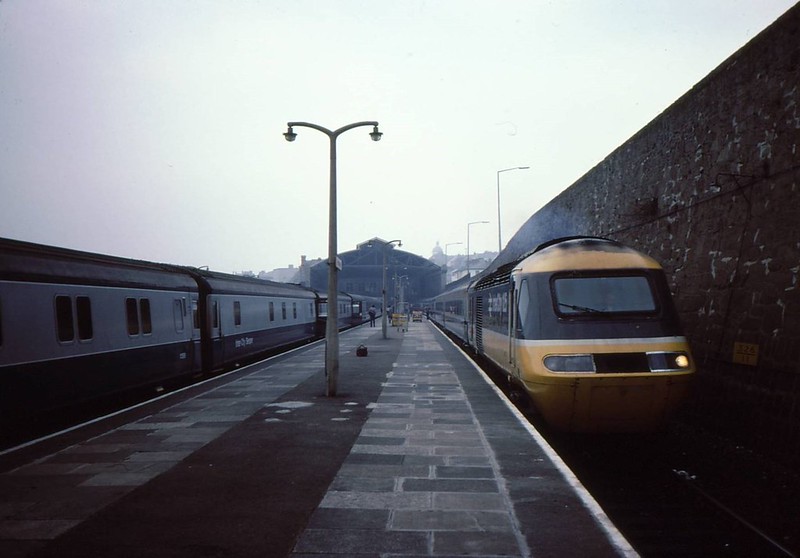 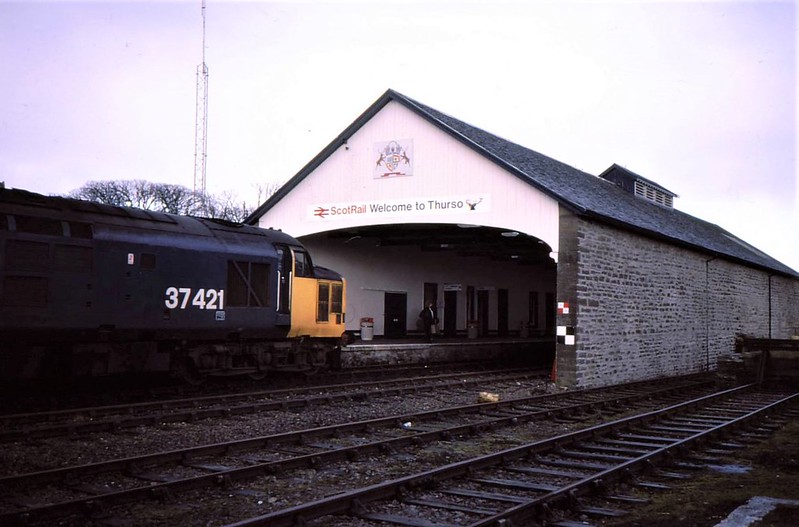 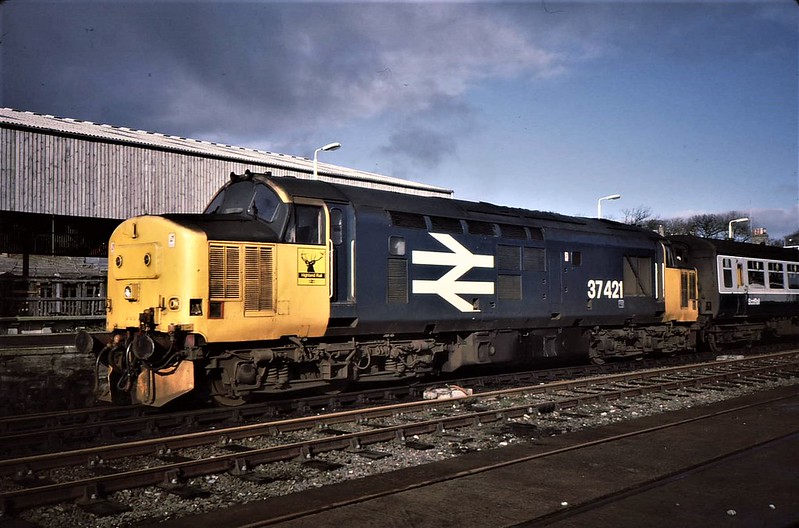 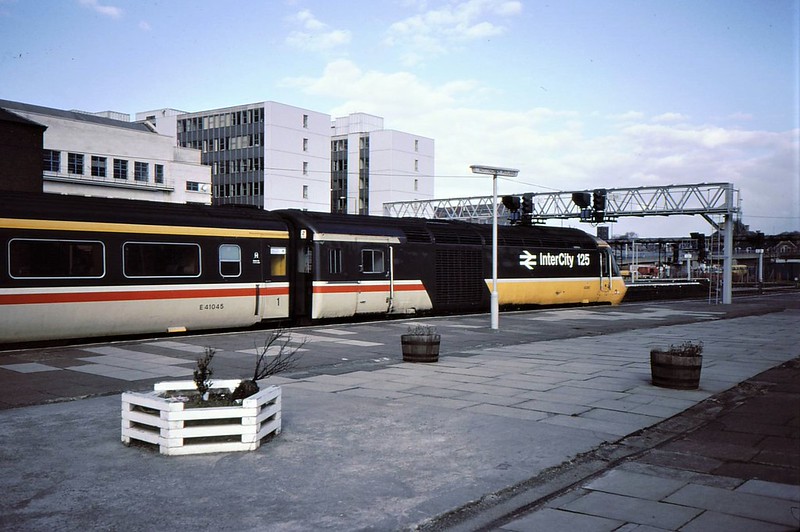 One particularly memorable evening: After a day of riding out to Mallaig and back.....I boarded a London bound sleeper in Fort William at 1730.....and then the long climb up to Corrour......looking out onto the snow swept Rannoch Moor under a bright moon while enjoying the Glenfiddich the Attendant had just brought me! 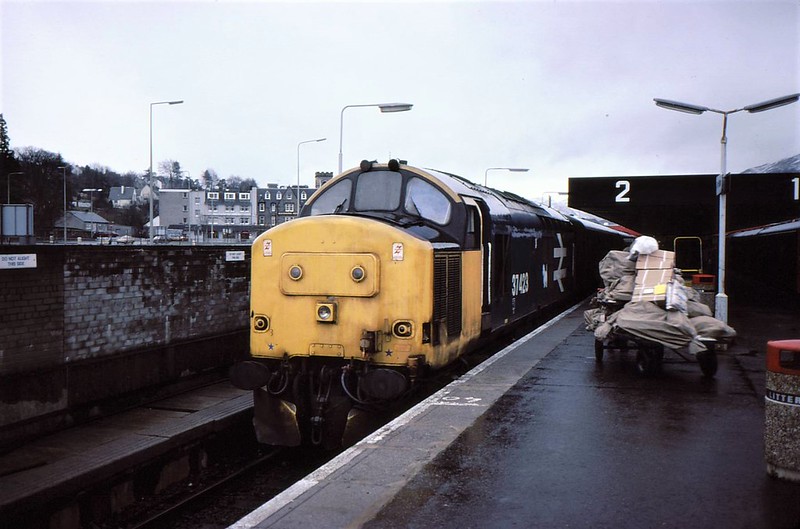 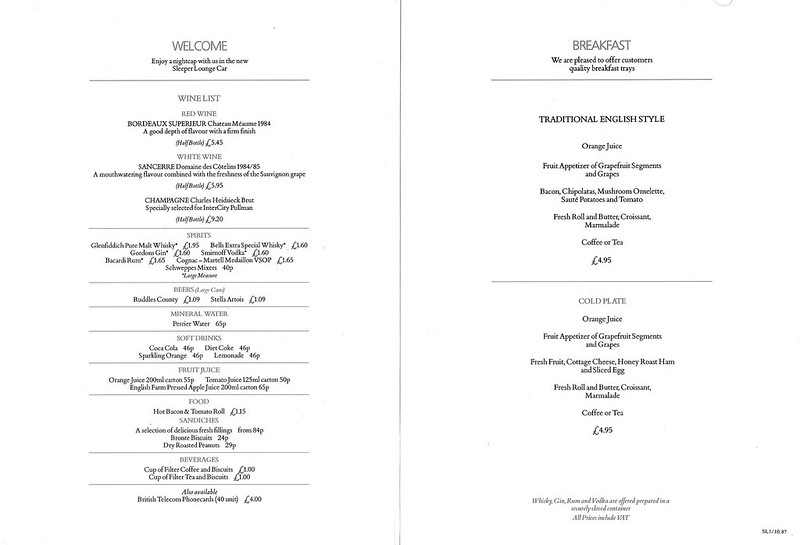 Hard to believe there were that many routes with sleepers. Now there's only the Caledonian "three-headed monster" (Inverness, Fort William, Aberdeen) and the Riviera to Penzance. The resurgence of sleepers on the "continent" has yet to make its way to Britain.

Gosh, that sounds like a very good trip, you have probably travelled on more British rail routes than I have!

I used to enjoy a similar type of travel when visiting continental Europe about 15 years ago. Visit a city during the day, then use the overnight sleeper network trains as a travelling hotel to my next destination.

I doubt if there is much demand for a comprehensive sleeper network in the UK these days.

caravanman said:
Gosh, that sounds like a very good trip, you have probably travelled on more British rail routes than I have!

I used to enjoy a similar type of travel when visiting continental Europe about 15 years ago. Visit a city during the day, then use the overnight sleeper network trains as a travelling hotel to my next destination.

I doubt if there is much demand for a comprehensive sleeper network in the UK these days.
Click to expand...

The day I went to Thurso I boarded a Sleeper at Glasgow Queen St at 11pm with an Inverness arrival at 430am but could stay aboard till just before my train to the north left at 630am.

The day I went to Thurso I boarded a Sleeper at Glasgow Queen St at 11pm with an Inverness arrival at 430am but could stay aboard till just before my train to the north left at 630am.

The Indian subcontinent and SE Asia are still the go to place to see active Neale's Ball Token based operations, though it is becoming really quite rare in India itself. Sri Lanka uses a different Token Table, but the principle is the same.

I still remember back in the days sitting close to the Station Master's office so I could hear the ding-ding from the token machines. It was possible to tell, from the dings, how far the train was upto two blocks away, and as the train passed into each block, one of the Khalasis would walk out and ring the platform bell with a different pattern, which was basically a short rail segment hung from the wall, which he would hit with a crowbar! It was really low tech operation, but fascinating. And then there was the token hoop exchange on the fly!
You must log in or register to reply here.
Share:
Facebook Twitter Reddit Pinterest Tumblr WhatsApp Email Link