And another one. In the boat from Bratislava to Vienna, my son and I encountered the counterpard in the other direction.

Oh well, and here the ferry between Sankt Goar and St. Goarshausen in Germany.
And the ferry from Hoek van Holland to Harwich in England.
You may guess which picture is which...

Jesus, that is one massive and weird looking ferry. How many people can that thing fit?

PeeweeTM said:
Well, walking from Orient Point to Greenport would have taken too long for the time I had, but it did cross my mind! ;-)
Click to expand...

It is also uphill all the way. It is a bit more than a mile IIRC. Port Jeff Station to Port Jeff Harbor, which is downhill, is much easier. I have done it both ways many times. It was my old stomping grounds when I was in Grad School at Stony Brook.

Well, I like to walk. Especially when long sitting sessions in planes and trains are involved. [emoji6]

What a difference 8 months makes!

I took the ferry over to the Toronto Islands last summer. It was 30C (90F) and the boats were packed. (see my previous post here a few pages back)

I crossed again last week on an ice filled harbour. The ferries used last summer were now covered with tarps for winter storage and only a small vessel was being used:

It is still beautiful, in its own winter way . Thanks for sharing it with us.

As with Amtrak, the Alaska ferry system is struggling:

Maglev said:
As with Amtrak, the Alaska ferry system is struggling:

Hope they keep it running. It's a great trip!

I must have fell in love with ferrys back in 44 when I rode the train to Oakland and took the railroad ferry to San Francisco. Since that time I've ridden a lot of ferry's. It's surprising how long some last. I rode the Enitai, Willipa and the Kalakala in the early 50s. I think the Enitai is a museum near fisherman's wharf. The Kalakala after much debate is gone, Sad! Rode ferry's to Bainbridge island from Bremerton to pick Strawberries, rode from Seattle to Bainbridge when the strawberrys were replaced with houses. The Coho from Port Angeles to Victoria another from Nanaimo to Horseshoe Bay, The Rhodadendrom to Pt. Townsend. Countless water taxi trips to Port Orchard. It's impossible to get around the northwest without ferrys

In my neck of the woods:

Prior to 1952, there was a ferry that traveled between Norfolk and Portsmouth. I think it was a vehicle ferry. Then the Norfolk-Portsmouth Bridge-Tunnel opened on May 23, 1952. Nowadays, we have a ferry that runs between the two cities but it doesn't accommodate vehicles.

Prior to 1957, we had a ferry that ran between Norfolk and Hampton. Then the first span of the Hampton Roads Bridge-Tunnel opened on November 1, 1957. The second span opened on June 3, 1976.

Then prior to 1964, a ferry ran between Norfolk/Princess Anne County/Virginia Beach. The Chesapeake Bay Bridge-Tunnel opened on April 15, 1964.

Hadn't realized they were free now - they were a nickel back in the 50's when I was last on them - I should have added: with my parents. I seem to recall a large-font sign with the price emblazoned on top of the second floor, perhaps saying Still 5 cents - using the symbol, which is lacking on keyboards and I'm not about to take the time to search for how to do it.

I'd forgotten that I also had one trip - from S.I. to Battery Park, sometime in the mid-90's after a Five Borough Bike Ride, but I'm fairly certain they weren't free back then.
Last edited: Aug 22, 2019

I don't know if there are any cyclists lurking here - I stopped riding two years ago due to balance issues and limited neck rotation, both essential functions for riding a bike.

However here are a couple of interesting ferry-rides out of Portland, which were among the Wednesday options in the middle of the five-day White Mountains to the Sea (WMttS) tour in 2017, starting (and ending) in Littleton, NH, and with two nights and a free-day in Portland, ME. Since they both start in Portland, there is Amtrak access.

The first one uses the Bailey Island Mail Boat, even though Bailey Island has long since been connected to the mainland by bridges, and this boat long ago stopped carrying any actual mail - likely synchronized with the completion of said bridges. This is run by Casco Bay Lines largely as a sightseeing trip, with one departure a day at 10 AM, a two-hour trip, and then a two hour lunch and wandering around break for the majority of the passengers, who are returning in the same manner in which they arrived. However, cyclists have a pleasant 45 mile return ride with a decent amount of ocean views, and there is never much traffic as you take bike paths back into the town.


The second one is interesting in a manner similar to crossing Shelter Island on Long Island (perhaps more on that later), although this Island is named Chebeague Island. The trip to it is by the independent Chebeague Transportation Company passenger ferry that sails from Cousins Island near Yarmouth to the NW corner of the island. The interesting part is that Casco Bay runs their own ferry to the southern tip of the island and assumes anyone taking it was also brought there by them on a RT ticket, so doesn't bother collecting fares.

It's a most pleasant ride back to Portland if done in late afternoon light (on a mostly sunny day), weaving between a half-dozen islands. The attached map only shows the ferry portion of this ride, as I have some four variations before Yarmouth, ranging from something like 20 miles to somewhat short of a century, which takes you as far north as Lewiston - well-known for a famous, but very short 1965 boxing title match, held in what the NYT termed ”a cross between an airplane hangar and an oversize barn."

The Marine Atlantic Highlanders was ready for boarding 2 hours before our midnight departure from North Sydney, NS. 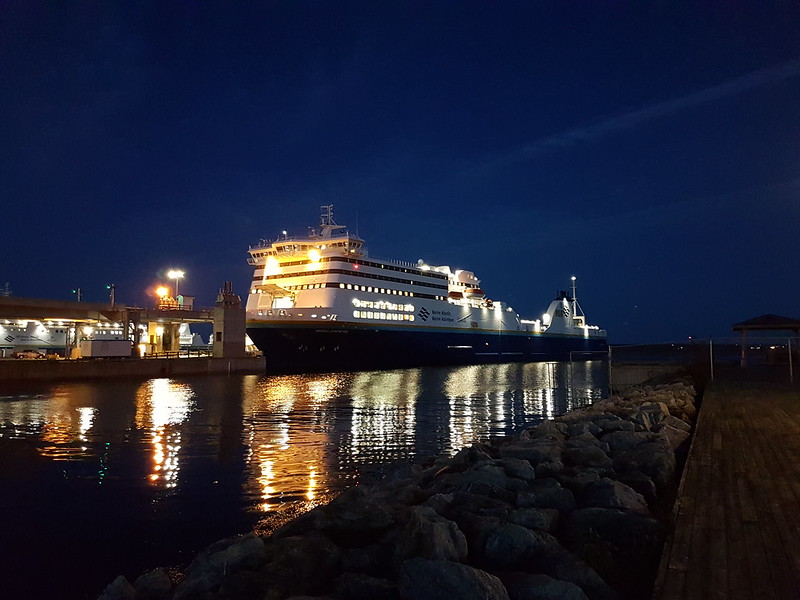 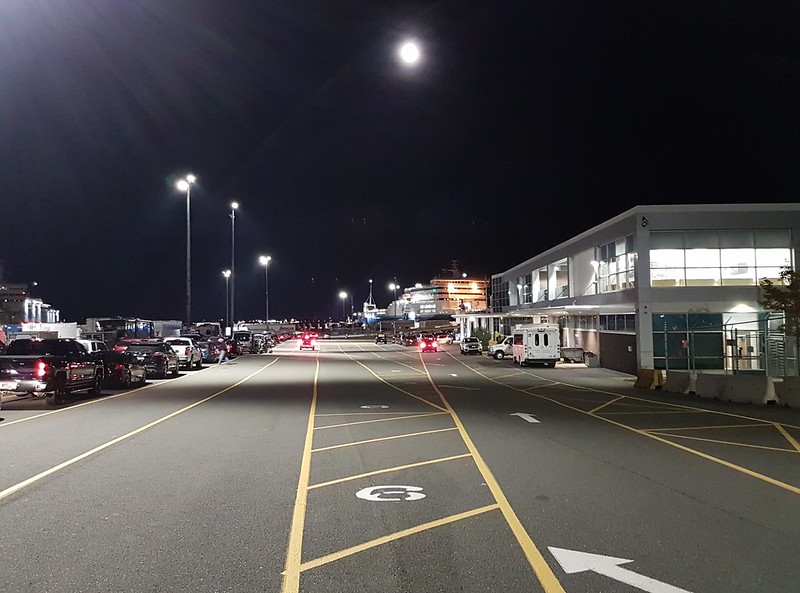 I had a cabin but there’s also coach and business-class seating available. 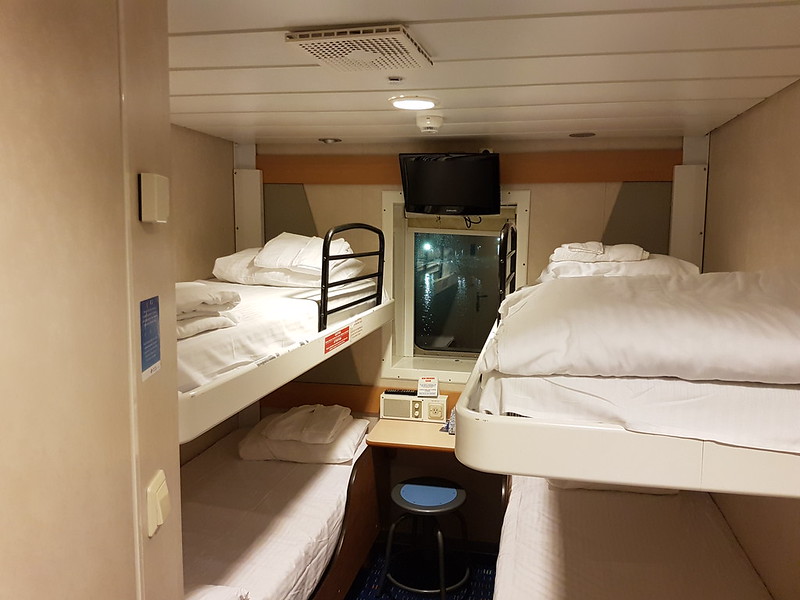 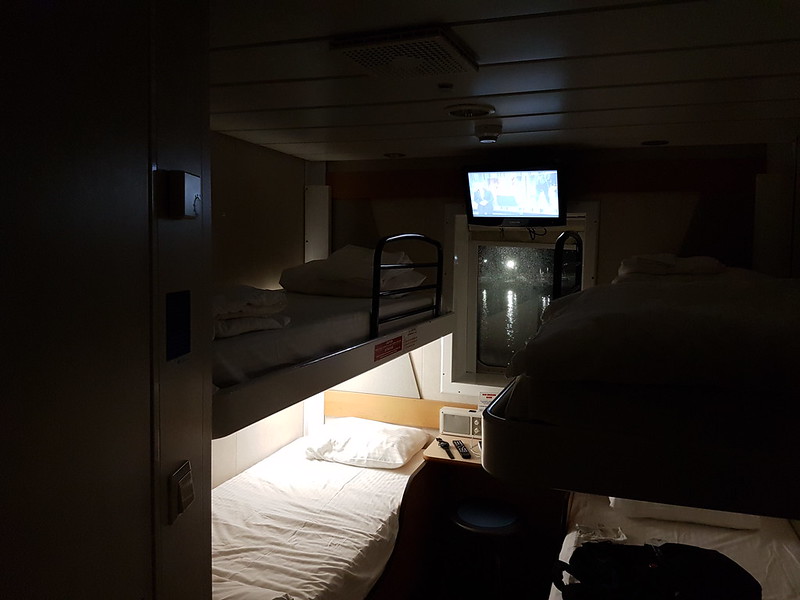 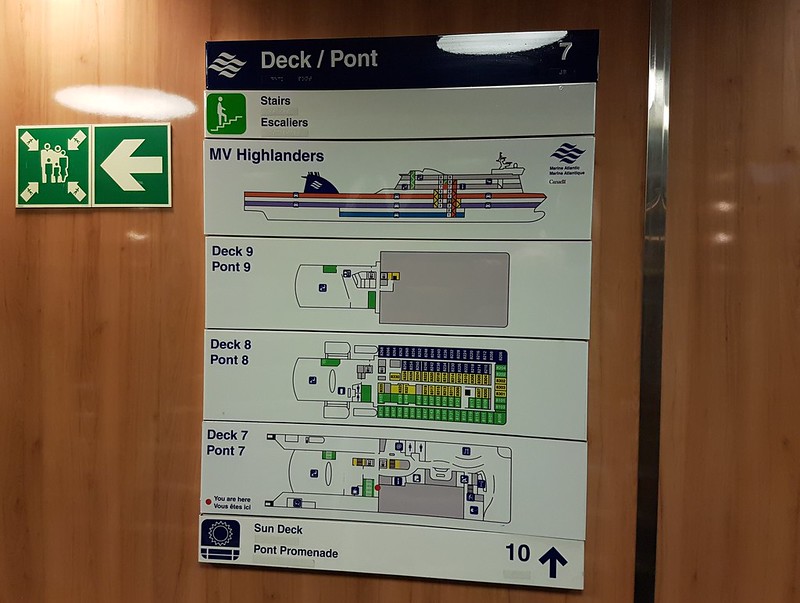 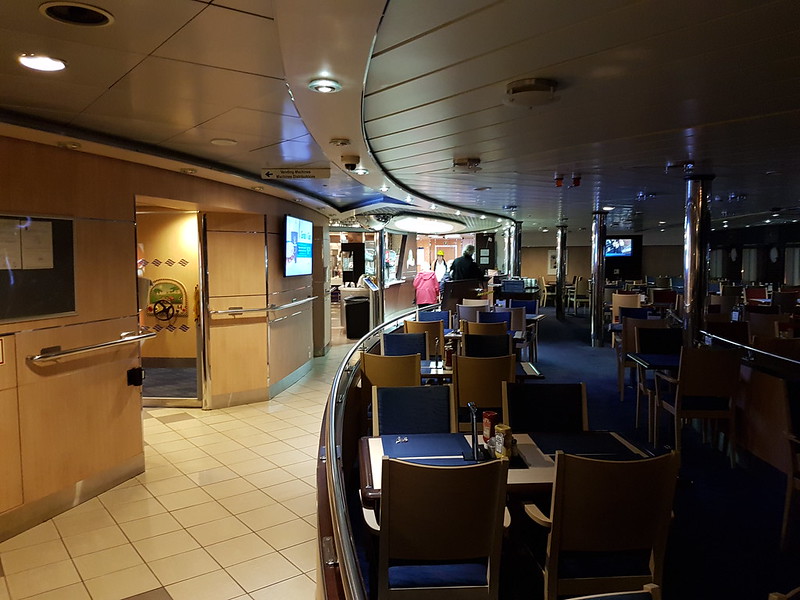 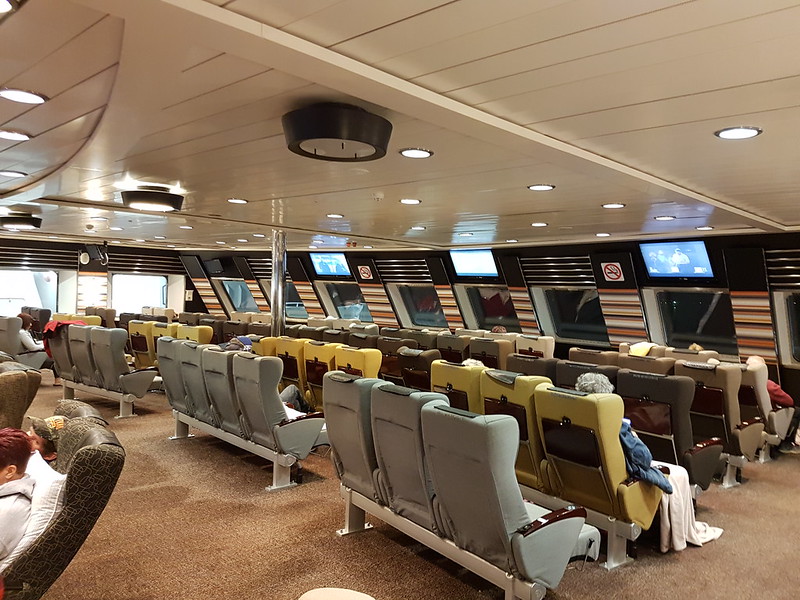 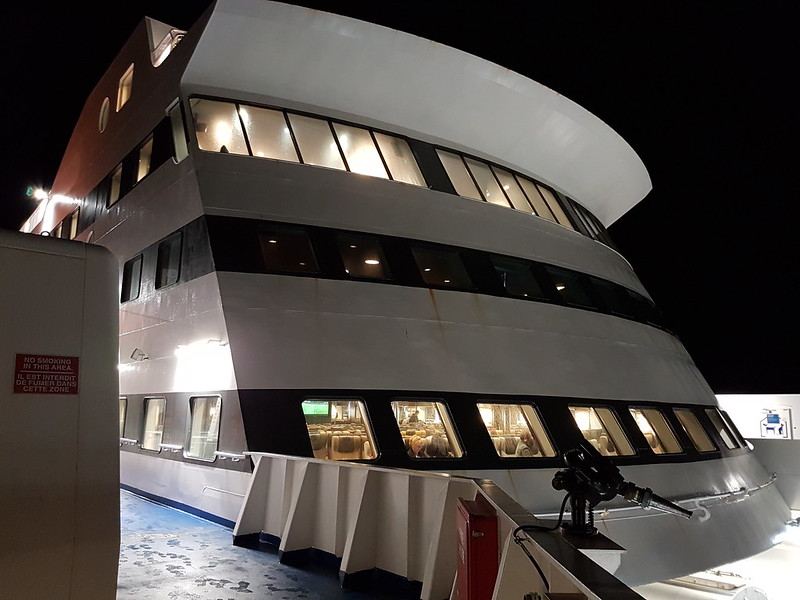 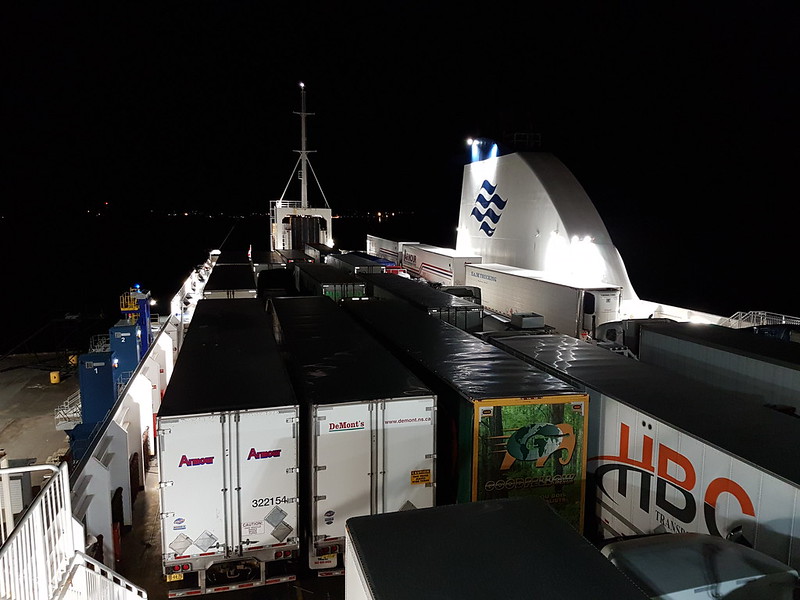 Arrival in Port aux Basques, Newfoundland was at 7am the next morning.

My trip over to Newfoundland was 2 days after Hurricane Dorian had gone through and the boats were full trying to get caught-up on the backlog of traffic that had accumulated while they weren’t running. Capacity is 450 cars or 90 truck on 2.8 kilometres of lane-length on the ferry. 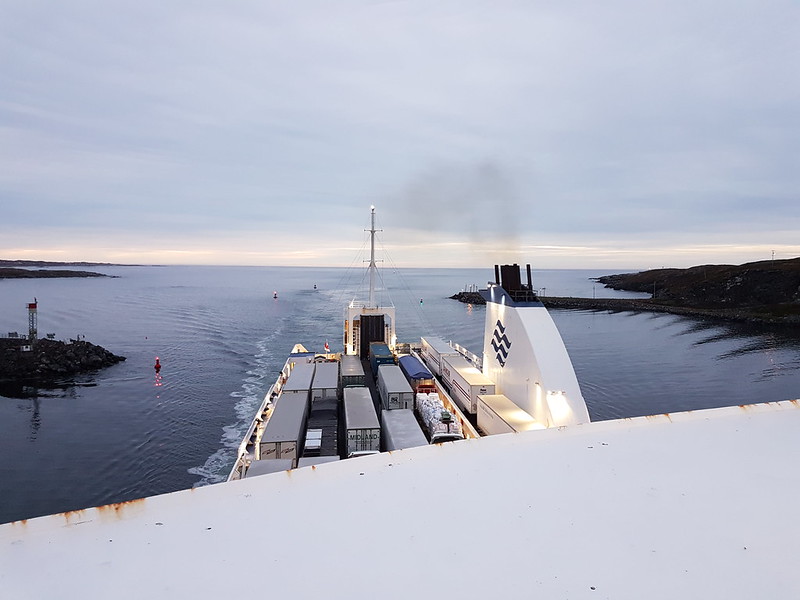 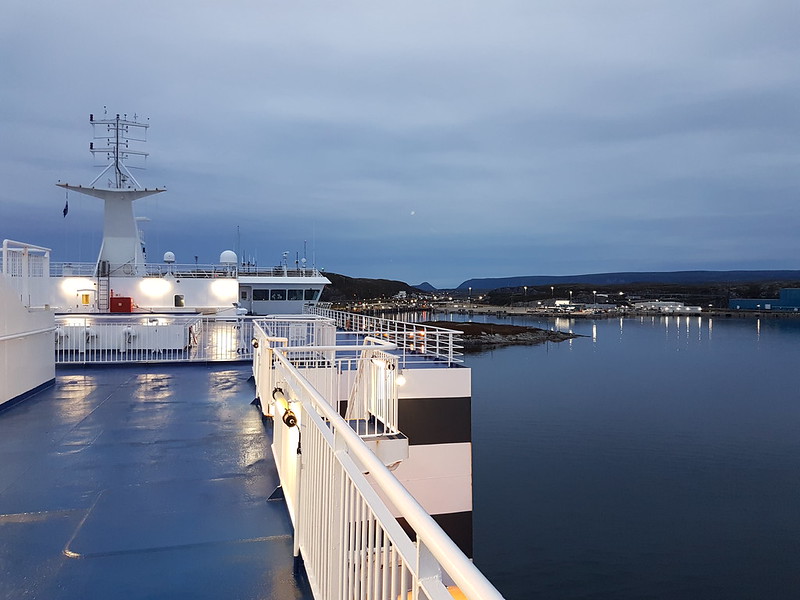 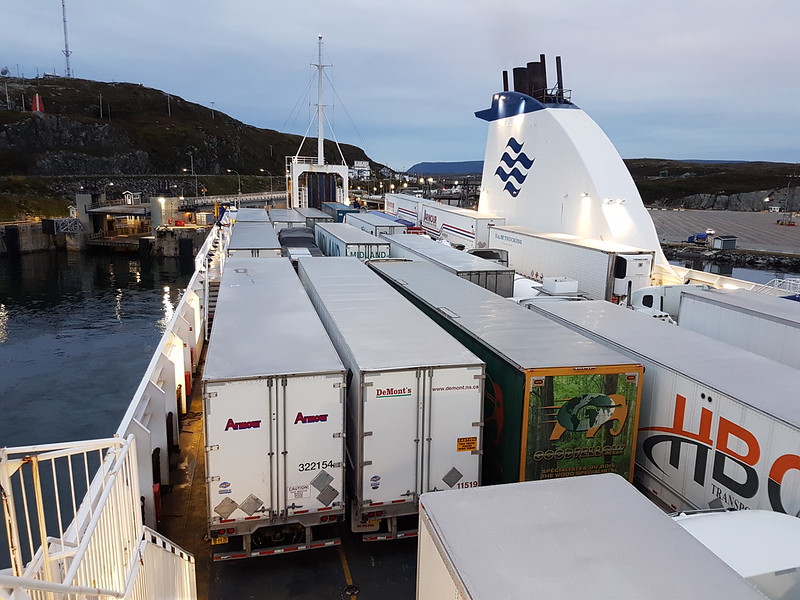 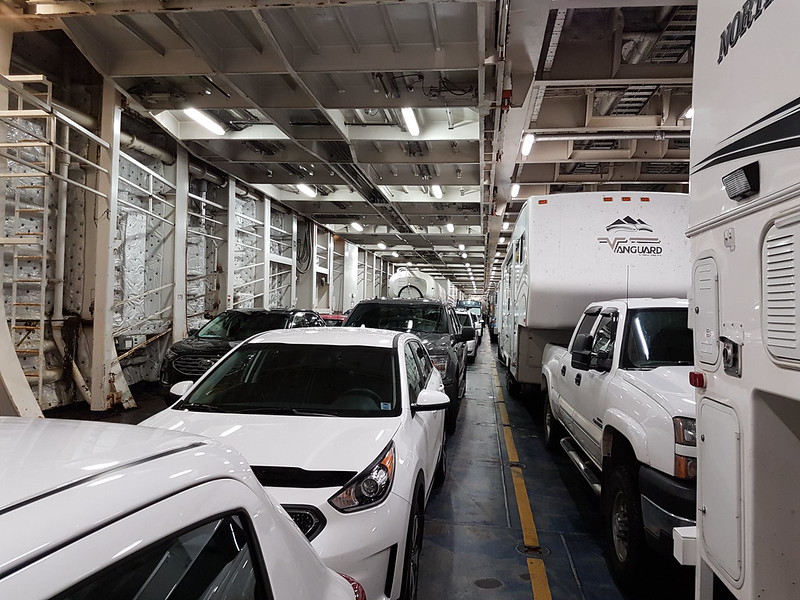 Great photo's, thanks for posting!

railiner said:
Great photo's, thanks for posting!
Click to expand...

Save me from looking at the ferry website...do they have cabins for one or two, besides the four? And do they all have their own bathrooms with shower?
Thanks....

railiner said:
Save me from looking at the ferry website...do they have cabins for one or two, besides the four? And do they all have their own bathrooms with shower?
Thanks....
Click to expand...

There’s two and four berth cabins available at the same price of $126.50 (per cabin, not per person) and all have private bathroom with shower. Tax is added to accommodations but not basic vehicle and passenger fares.

The older boats: the Caribou and Smallwood (now out of service) that were on the run for about 25 years beginning in ’85 had another type of accommodation: the ‘Dormitory Sleeper’…rows of lower and upper berths in a large room…..just like the old style Pullmans. They gave you a pillow but you brought your own sleeping bag or blanket. They were cheap and very popular. People just wanted a place to put their head down for the 7 hour crossing!

Now the cheaper option besides the coach seats in the photo above are Business Class type seats with leg/foot rests. (see photo #4 in this link)

Thanks!
But my curiosity drove me to check out the various accommodation's, anyway...

I am wondering about them charging HST for the accommodation part of the fare...VIA Rail doesn't do that, or do they? Why the difference?

railiner said:
Thanks!
I am wondering about them charging HST for the accommodation part of the fare...VIA Rail doesn't do that, or do they? Why the difference?
Click to expand...

VIA does charge HST/GST on both the basic fare and accommodations.

Marine Atlantic doesn't charge tax on the basic fare as its considered a essential service. The Federal Government is required to maintain a ferry service as part of the Terms of Union between Newfoundland and Canada when they joined Confederation in 1949. (Some even say the basic service should be free) Accommodations are considered an amenity or extra so they're taxable.